The phone rang. It was June, 1978 and as soon as I said “Hello”, my frantic friend burst into tears and said, “Thank goodness you’re ok, I thought you were dead!”  Breathlessly she then went on to explain that her previous boss, my ex-boyfriend from a month ago, was shot in the head and the girl he was with was killed!

God will use most anything to get our attention and this of course got mine! As I rushed to the hospital, I was praying that God would save him and somehow use this for good.   I knew about Jesus, went to church most Sundays, but only called out to Him when I was in need and this was one of those desperate times.

As I arrived at the ICU waiting room, I met his sister, Soozie, for the very first time. It was then I heard more of the story. Mike, her brother, was a restaurant owner and manager of one of the restaurants in the shopping center where I was the Marketing Manager. Yet it was at one of his other restaurants in a safe, suburban neighborhood, at 2am, after the restaurant had closed, where he was sitting in the car with his head waitress reviewing the evening.  An unknown assailant approached the car, shot him in the head and as the waitress ran, shot and killed her.  Most of my friends who had not heard of our break-up thought that girl was me.

So together, Soozie and I anxiously awaited to hear if he would live, and if so, what kind of brain damage he would have, or even if he would ever be able to see again. That’s how Soozie, a missionary with CRU, and I met.

Soozie and I built up a friendship over time watching her brother miraculously recover!  So, six months later, she had a ministry conference in San Diego and invited me to join her for the pampering experience of staying in a hotel, relaxing and enjoying the luxury of a big swimming pool.  At one point she said, “Sherri, what is keeping you from asking Jesus to be the Lord and Savior of your life?”  Well, in my head, I knew what that meant since my older sister had made that decision to have a personal relationship with Jesus.  I clearly saw how her life and choices had completely changed after that decision.

So, I answered her question with: “Well, I’m just not ready yet. I know part of my lifestyle is not pleasing to Him, and I know I have pride issues and always wanting to be in control of my life… but I’m working on it.”

You see, I went to college during the “Hippy Era”…the “make love, not war” era and I was probably the straightest prude I knew…I never did drugs, rarely drank, because I liked to dance too much, but over the years my defenses had broken down and I was letting the outside world effect my attitudes towards love and sex.  And from MY actions and MY choices I got a sexually transmitted disease on a supposed romantic weekend away with a near-stranger.

So here I was, being lovingly confronted by my new and only Christian friend when she said, “Do you think you have to perfect?” “Well, no” I said. “Do you think He doesn’t see what you are doing?” she said. “Well, no.” I said. “Are you trying to change on your own? Well, you haven’t done too well yet and you are almost thirty years old.” she said.

Well, her words finally made sense to me.  She compassionately reminded me how God loves me, He created me, and He sees everything whether I want Him to or not; that no one can be perfect, to let Him have the glory of making the changes in my life, that He accepts us where we are…let Him do the work not me, and to give up the control of my life and trust Him.  She said it is as simple as the ABCs.  She reminded me that He is standing at my door and knocking, all I have to do is let Him in and Admit I’m not perfect, I am a sinner, that I can’t do it alone He Accepts me right where I am and Ask for his forgiveness, Believe, as I did, that a Holy God sent His perfect Son to earth to die in my place and then He rose again, and then to Confess this with my mouth and give up Control of my life and trust Him.

So, on that day, I asked His forgiveness for my attitudes, lifestyle, all the sins I could think of and then asked Him into my life!! I felt a big sense of relief that I didn’t have to be in control anymore! I finally took that step that my sister had encouraged me to do for years. And isn’t it interesting, the next week, on another one of those zillion blind dates, I met my husband to be. A sensitive, caring, handsome Christian man named Ken and now we have been married 40 years.

I could write pages about all the miracles and experiences God had in store for me all for His purpose and plan, but I will just fast forward to the most exciting part. It was 8 years since I asked the Lord into my life, but now after attending some Bible studies, learning from some older and wiser women what it was to have some quiet time and reading God’s Word, the Bible, I realized I was still holding back small portions of my life that I still wanted to control. If Jesus was truly to be LORD of my life, which means KING, I needed to surrender and give everything, every part of me, to Him to be used for whatever purpose He had in mind.

So, in the silence and majesty of the snow-covered trees in Big Bear, CA, I prayed, “Use me Lord!  You know every intricate part of me. You gave me my past experiences, my talents and gifts. Take them and use them for your glory. You know the desire of my heart is to be a stay at home Mom. I will do anything and go anywhere but make it so clear; bonk me on the head so I won’t miss it.”   You see God doesn’t ask us to be perfect, just obedient and I was beginning to get it.   All we need to do is be available and willing.

That was March. In April, I had the idea that we should have a song for the commissioning service for a new care-giving ministry at our church. A committee was formed but God had a different idea. In the lady’s restroom, I started singing a song with words I had never heard of before in my life.  I came bursting out of the restroom to find the only person left in the meeting room was the only pianist in the group! We found a tape recorder, recorded two verses, and on my drive home the third verse came to me.  I didn’t know I could write a song, but the Lord did!

The next month was May and it was the Friday before Mother’s Day and I was listening to my favorite radio show on raising a family. Since I had two little ones, I was always looking for new ideas on parenting. And so, I’m listening as the host was interviewing an author and radio host named Karen Hull.  During one brief moment, she says, “I challenge someone out there to start a radio show for Moms.” Often overwhelmed with motherhood at almost 40 years old, I thought “I sure hope someone does!”

That night, at 10 at night, I am finally cleaning up from dinner and I am sweeping the floor and my husband turns off the T.V. and turns on the radio. I don’t think we’ve ever had that scenario before then or after.  Now, it’s on a different radio station but the same show at exactly the moment when I heard again the same lady’s voice, “I challenge someone to start a radio show for moms.” Well, this time I stopped and thought, “Is she talking to me?”  You see, I had created and produced a cable T.V. show in Southern California when we thought the Lord had closed the door to having children, and I had radio sales and copywriting experience. But then reality returned as I thought of my four-year-old and fourteen-month-old, and my lack of energy and time. So, I dismissed it again.

It was the next day, the day before Mother’s Day, 1987, I got in my car to leave the grocery store. I turned on my car and now this familiar radio voice shouted to me, “And I challenge someone to start a radio show for Moms!!!”  It was the hour review show and it just happened to be at the exact moment she gave her challenge again! I stopped the car, shaking, crying with goose bumps all over my body and I said, “Okay Lord, “I hear you and I will do whatever You ask, but please give me the time, energy, know how, money, the people I need, children who sleep, a husband who agrees; everything, but, YES, Lord, I will obey!!”   He truly bonked me on the head!!  That started one of the most exciting adventures of my life.

I was beginning to learn that God has created each of us with a plan and purpose and HE is more interested in your availability than your ability.  He is the Creator of our lives.  He knit you together in your mother’s womb knowing exactly your talents, your gifts, your abilities, your passions, and the experiences you will have. He doesn’t make mistakes. You are unique. No one else is like you. So, when He calls you to do something, He’s calling YOU! All you have to do is be available and willing, keep your focus on Him, and just say, “Yes, Lord!” 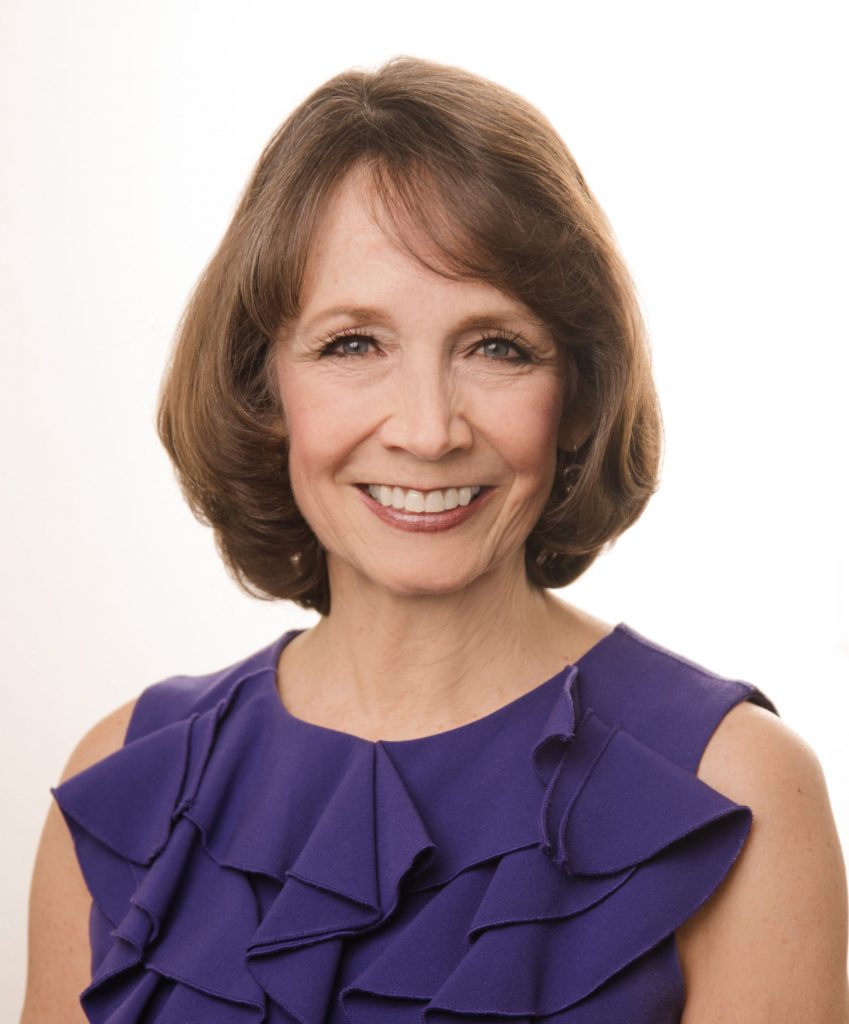 Sherri Martinelli, a motivational speaker,  is a woman of contrast and variety. Sherri graduated from Michigan State University in Communications and Mathematics planning to be a teacher, but her first job after college was selling new and used cars and trucks. She represented the State of Michigan in the Model of the Year Pageant but after modeling in New York she lived in a tent all summer with 2nd graders as a counselor on the Chesapeake Bay in Maryland.

Her business background has been primarily in sales, marketing and event planning, but her heart’s desire was to be a stay-at-home mom. But after facing the prospects of infertility she instead gave birth to an original cable TV show in 1982 much like the Shopper’s Network and YOUTube combined called VideoValues.  Yet, her dream came true when God blessed them with children who are now 38, 35 and 32.

After learning so much from the wise Moms she interviewed, she authored a perpetual calendar Mother’s Moments that sold 100, 000 copies world-wide.  Recently she adapted the calendar into a keepsake memory journal, and gift book devotional, MOM’S MOMENTS ~ Smiles to Remember, with 366 original parenting poems and accompanying Bible verses. She is a motivational speaker and has also written and performs one-woman dramas of women of the Bible.  It all started when she said: “Yes, Lord!”