Armchair Travel in the time of Covid-19

In the late 1800s the West Side Cowboys rode and waved flags in front of Manhattan’s Tenth Avenue freight trains. New Yorkers, being of stubborn and independent character, ignored the Cowboys and their warnings. In time, after many accidents, Tenth Avenue became known as “Death Avenue.”

After 87 years of mayhem, an elevated train viaduct was opened above the street. Known as the High Line, it ran above the streets, through and under buildings, allowing trains to deliver meat (to the meat packing district) produce and manufactured goods without disturbing (or killing) the New Yorkers below.

By the 1960s, as trucks took over delivery in Manhattan (helping to further paralyze traffic) the High Line was little used and parts were being demolished. Inaccessible to ordinary foot traffic, the High Line reverted back to nature. Natural plants and grasses took over, rails rusted, birds and small animals took up residence. Audacious photographers intruded with models for furtive and infamous nude shoots with the city as the background.

Today the remaining mile-and-a-half of the High Line – from the Whitney Museum on Gansevoort Street north through the Meatpacking District, trendy Chelsea, the Long Island Railroad yards and new high-rise construction to the Javits Center on 34th Street – has been transformed into the High Line Park. Welcoming five million locals and visitors a year, the High Line features changing art installations, native grasses, flowers and plants, sweeping views over the Hudson River and on to New Jersey, benches and bleachers, east-west Manhattan streets and high-rise buildings so close you can look in the windows and see what residents are having for lunch.

Although I’d taken little notice the High Line from below over the years (an old, abandoned rail trestle and an urban eyesore, I thought) I first walked the revived High Line a couple of years ago in the fall – north to south – in a driving New York rainstorm. There were very few people and art looks quite different when your glasses are streaming water and there’s a cold trickle running down the back of your neck.

Why in the rain? My schedule was tight and the on the day I had chosen for the walk, it bucketed rain. I thought it might be a unique experience. It was! 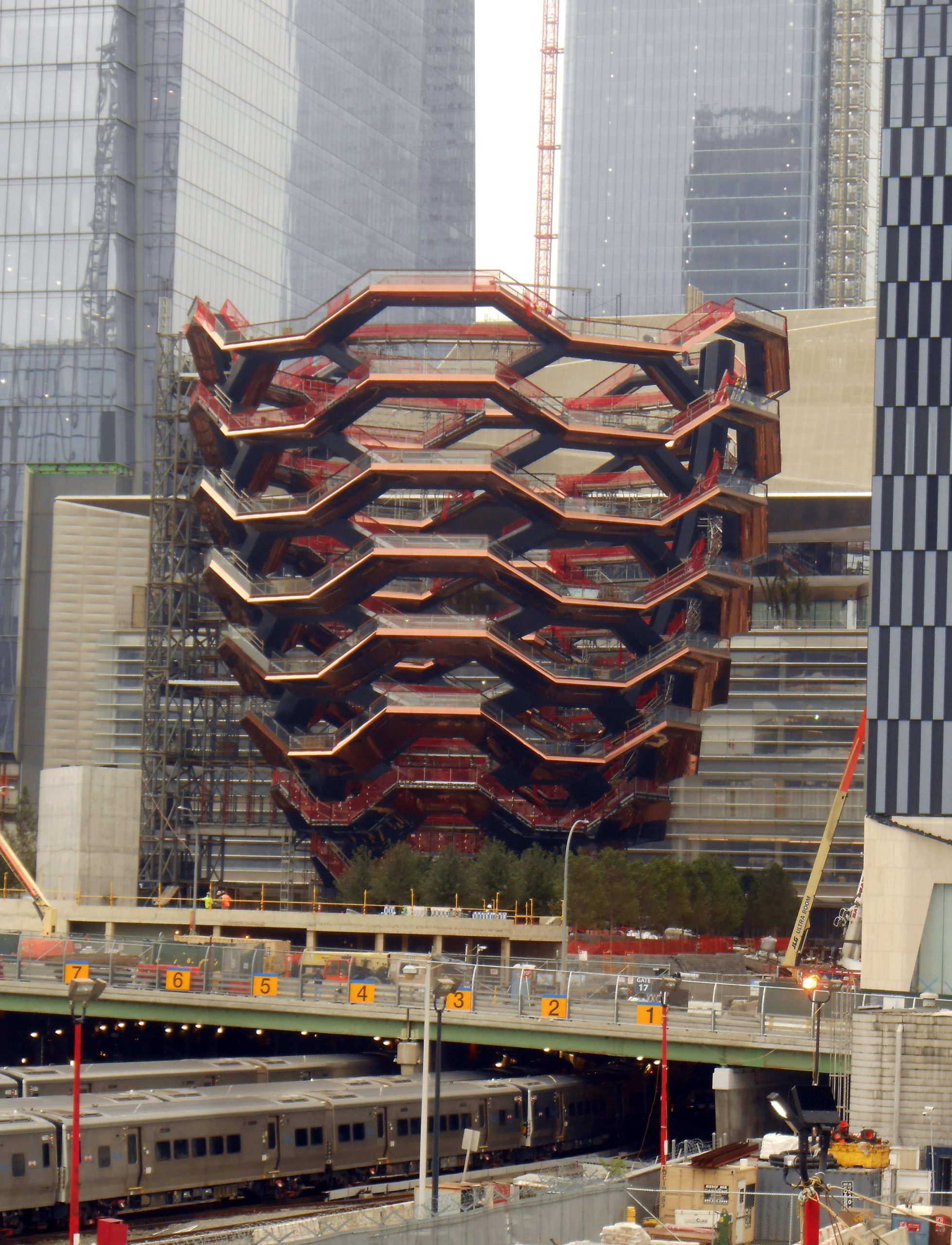 “The Vessel,” a unique structure with a spiral staircase over the Hudson Yards is just one of the unusual architectural features along the High Line.

A couple of summers ago (preCovid)  I was in New York again and had an opportunity to stroll above the City, along with thousands of others, on a bright, warm, dry day. I started at the Whitney Museum (home of great art and the $34 hamburger) and made my way north. I was continually stopping to take a photo, gaze out over the streetscapes, check out the art (I am obviously a Philistine because some of it I didn’t quite “get” at all), see the helicopters come and go, people watch and generally marvel at how this green, quiet narrow ribbon of saneness existed in a city of humid heat, rotten summer smells, clashing noise, sirens, and rushing people. And a big treat for New York – it’s free!

There were single people, couples, families walking, talking in a multitude of languages, laughing, pointing, taking photos and just hanging out. A photo shoot had a model in a fur trimmed parka leaning against the railing in the midday heat while a dresser pulled and poked at her outfit.

A meeting inside a building not 30 feet away, had the participants ignoring the people outside peering in. Ice cream and cold drinks in the dim coolness under the Standard Hotel. The incredible architectural curves on the exterior of a new apartment building. No dogs. Giant yellow flowers bobbing over the walkway. Tourists with knapsacks. School classes in red or blue or yellow identifying t-shirts sitting on the grass eating lunch, anxious teachers hovering about. Sunbathers. People reading. Concrete trucks below dumping their load into buckets that are hoisted 40 stories up to grow the city. Couples embracing. Tattered people having loud, animated conversations with imaginary friends. It’s like experiencing a whole spectrum of life-in-the-city-in-the-summer in an hour over 20 blocks.