Unk played the violin–well, he called it a fiddle–but he’d never play it when anyone was around. Except for Eleanor. He’d play it for her. But then they’d been friends for over seventy years, since they were babies.

I think Unk was always sweet on her. That’s not to say they dated or anything, not like going to the movies or out to dinner–Mom said they never did that.

“Just passionate friends,” Mom would say, and try as I might to read into what she’d said, I never heard her snicker nor caught a wink when she said it. Nor did she even hint that there might be anything sexual in her use of the word passionate.

Neither of them ever married. Eleanor was referred to as Perryville’s old maid, but never with any maliciousness to the phrase. And Unk, everybody jokingly called him Perryville’s most eligible bachelor, which was kind of ironic because Unk wasn’t much to look at. He was short, with liver spots on his forehead that continued on up over his bald dome. His right eye was dried up from a metal shaving that flew into it when he was a teenager running a grinding wheel at the mill. His face was pock-marked from some awful acne that had plagued him in his younger years. And his knee had been crushed when a stack of logs broke loose off a railroad flatcar he and a friend were unloading with horses. Both of the horses and his friend were crushed to death, and Unk said he’d always considered himself fortunate to escape with only a draggy limp.

Eleanor was the only child of a couple who had run the dry goods store in town. She ran it alone for awhile after he parents died, but sold it to a man from Brattleboro when it got to be too much. She taught Sunday school at the Congregational Church–children for many years, then an adult Bible class after she turned fifty.    That’s when Unk, who had dropped out of church when he was ten, had started attending her adult class and became a regular member. Eleanor also sang in the choir–she had a lovely alto voice and occasionally sang solos–and served at church suppers and sewed for the Ladies Aid. It was rumored that she played the harmonica, but not in public. The church seemed to be the extent of her social life, except for having Unk come by Saturday nights with his fiddle.

Unk was Grampa’s brother and had lived with Grampa and Grandma most of his life, working the farm. When they died and left him the place, he surprised everyone by selling it and moving in with us.

We fixed up a room for him in the loft over the garage. Since the garage had been built onto the back of our house, it meant Unk’s room shared a common wall with my bedroom. The wall was thicker than an interior wall, of course, because it had once been the clapboarded back wall of the house. Yet despite its thickness, once I was in bed I could hear Unk playing that fiddle–every night except Saturday when he was at Eleanor’s. The music was faint and I couldn’t make out all the notes, but on a good night it would work its way through the wall sweet and mournful, never the scratchy sound I expected a violin to make (an expectation I developed from watching Alfalfa in the Our Gang comedies).

When he wasn’t using them, Unk’s fiddle and bow hung on the wall above his bed. I never saw them there, because I was never in his room. I figured it out in later years when he got the tremors. After he finished playing for the night, I’d hear the fiddle k-k-klunking against our common wall as his hand shook while he tried to put it back in place.

When I was eleven or twelve, Unk and I went fishing at Thatcher Pond. As I fumbled to get a worm on my hook, Unk mumbled, “Eleanor baits a hook faster’n that.” At first I thought he was jibing me, but then I recalled the tone and the way he’d said it, and I turned the sentence over in my head. He hadn’t said it to put me down–that wasn’t in his voice. In fact, he wasn’t talking to me at all, not really. He was talking to himself, out loud, simply stating an observation, maybe a fact: Eleanor Fawcett, the old maid who played a harmonica when nobody was around, a woman nobody ever saw fish (at least not to my knowledge), could bait a hook pretty darned fast. Unk knew.

Later, as we were packing up to leave, Unk put his arm around my shoulder and told me how much he loved to fish. He said selling the farm was the best thing he’d ever done, because it gave him time to do the things he loved. He didn’t tell me what it was he loved, but if he could have mouthed the words, I expect they’d have ushered forth in a holy whisper: fishing, fiddling, and Eleanor. I tried to imagine Unk and Eleanor after Saturday dinner, sitting in her parlor, tapping their toes and conversing through their fiddle and harmonica.

One afternoon I was on my hands and knees in the garden, pulling carrots and handing them to Unk. I asked him why he only played the fiddle in private. He looked at me as if debating whether to tell, then said, “When I was ten, I was learning my dad’s fiddle. Dad played barn dances. One day I mentioned to Reverend Hotchkiss, who’s dead now, that I hoped to be good enough to play in church someday. He shook his head no, and told me a fiddle ain’t suitable for church music and giving glory to God.”

Unk was silent for a moment, and when I looked up at him, his face was set like granite. I guessed that was the year Unk stopped going to church.

Her viewing hours were Friday night. Mom, Dad, and I went. Unk refused. He stayed in his room, saying he preferred to remember her the way he’d last seen her. I thought she looked fine, in a pretty black dress with pink and purple flowers on it. Her hands were folded on her stomach as if praying, which seemed to me appropriate, and her knuckles didn’t look gnarly or arthritic. I tried to imagine those fingers baiting a hook.

Next day the church was full for the funeral. Unk didn’t go with us when we left the house in the car. He said he’d catch up, but I doubted he’d show, not without the car to get there. And after all, he hadn’t been able to face the visiting hours.

As the pews filled up, Mrs. King played a medley of old hymns on the organ. Eleanor’s two elderly cousins from New Hampshire, her only blood family, sat in the front pew. The choir sang In the Garden and Abide with Me, two of Eleanor’s favorites.

Reverend Winters read a handful of scripture passages, including one about running the race with perseverance and fighting the good fight, which made me wonder if Eleanor had been in some lifelong struggle I hadn’t been aware of. He offered a brief eulogy, then asked if anyone cared to share any memories about Eleanor or to offer any words of thanksgiving for her life.

Roberta Gerrity spoke for the choir, saying “Eleanor was a faithful and committed choir member who inspired us all.”

A man stood and spoke of being inspired by the Sunday school teacher Eleanor. He sat down and there followed a long, uncomfortable silence.

No one else spoke. I wanted to fill the void myself, but I didn’t know what to say and my body felt heavy as a stone.

That’s when Unk limped down the aisle, fiddle in his left hand, bow in his right. He was dripping sweat from the mile walk in from the house. He walked slowly, shyly, reverently. His head was bent and he trudged, trudged like a man climbing a gallows. When he reached the golden oak communion table with the carved In Remembrance of Me across its front, he looked out over the congregation. He wanted to speak, but his lips only trembled. Tears mixed with the streams of sweat on his face. The saltiness must have stung his eyes, because he blinked and blinked. I wanted to run up and comfort him, but I couldn’t move.

Unk raised the fiddle to his shoulder, cradled it under his chin, and drew the bow across the strings. He began with Amazing Grace, slipped seamlessly into Greensleeves, then wove together strains from both into a sound more mournful and sweeter than any I’ve ever heard. We cried then, the whole church, to watch and hear Unk honor and weep for Eleanor through his fiddle. When he stopped, we sat stunned. Unk walked out, fiddle and bow in hand, and trudged home.

No music seeped through my wall for months after that.

Then one morning Unk came down to breakfast, smiled, and said, “Want to fish Thatcher’s?” By mid-morning we had a beautiful brown trout.

That night I lay in bed, thinking about the trout, the warm sun, and how good it felt to have Unk back. Then I heard it–Unk’s fiddle singing.

I think he played in his room every night after that until his dying day. And many a night, I swear I don’t know how, Unk made that fiddle wail and cry, just like a harmonica. 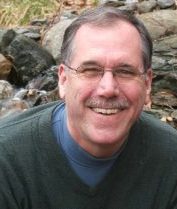 Pastor Steve Burt is a retired rural New England Congregational minister who splits his year between Maine and Florida. He has written for Chicken Soup for the Soul, Reader’s Digest, Family Circle, and Down East.

His email address is passtev@aol.com