More than a dozen new books from Hallard Press will be coming out during the first half of 2021. Here are two of them you might enjoy. 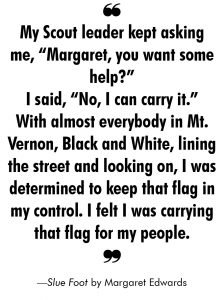 The narrator, Anna Margaret, doesn’t attempt to point fingers, lay blame, or be a victim—she just describes growing up Black, poor, and very curious from about age four until eighteen, in a large, growing family sprawled out over several southern and central states during the 1950s.

To an extent she emulates Daddy, who curses equally upon both “Colored,” (as they are called at the time), and whites, works day and night, and holds his immediate family especially close. So close in fact that they are not allowed to play in the front yard nor go to school parties or church events.

Of course, Ms. Edwards experiences discrimination firsthand, from a segregated school to being replaced by a white student for a school chorale visit to another city. She is also sexually abused by members of her own family. In all of it she describes the encounters from an almost academic point of view: this happened, it meant that, and life goes on because it must.

The title, Slue Foot refers to Anna Margaret’s feet. “I was real clear about some of my other flaws. Like my feet was a flaw. When I walked, one foot pointed northeast and the other foot pointed northwest. It was like I was confused and didn’t know which way I was going.”

Slue Foot is expected to be on Amazon and available in book stores in both print and e-book versions in March 2021. 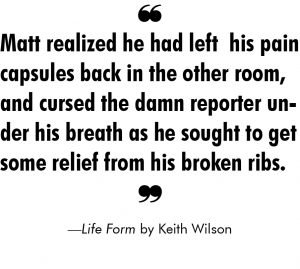 In Plunder we follow the adventures of Dr. Brett Carson, a ??? CDC who chases a killer virus across the US and Central America (sound familiar?). Carson, in turn is chased by killers and an austere order of monks assisted by a beautiful academic and a large, mangy dog. It makes for a fun and exciting read.

Life Form is no different. The residents of a small New Hampshire town live happily—until they leave the town. Then they die. No one knows why until the local high school science teacher begins to figure out the reason. Of course, no one in authority listens. And those that do want him shut up—permanently.

Wilson has a knack for action and intrigue. The main character, Matt Strong, flying an ultralight is chased down by black government helicopters, crashing in the New England forest. He infiltrates the Pentagon and is challenged at every turn by security. At one point, Matt says to his girlfriend, “There’s nobody to help us now. Until we get the story to the papers and go public with it, we’re on our own.” It’s a book where, every once in a while, the reader has to consciously take a moment to breathe.

Life Form is expected to be on Amazon and available in book stores in both print and e-book versions in March 2021.