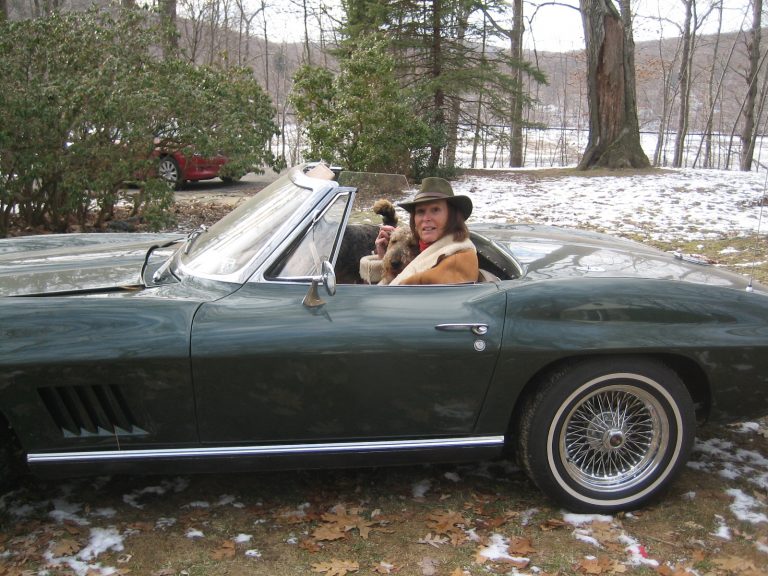 Renée in her 1967 Corvette convertible

I knew it had to happen someday. Everything changes. Nothing stays the same, so it is said.

I’ve had my 1967 Corvette convertible for 20 years. I’ve loved it—driving it, caring for it, repairing it, babying it. Local driving, good weather only. It was part of my persona, whatever that means.

Arleen advised me, “Sell the Corvette. You have had it long enough.”

I’m too old to handle the no-power steering wheel, even though it was genuine teak wood. Too old to be comfortable with the stick shift. Too nervous to take it on the Interstate with those big eighteen-wheelers barreling down on you and blasting you onto the shoulder.

Not to mention the fear of driving to Woodstock, or some other pleasant day trip, only to have the engine stall and I have to look franticly for a repairman. And the most important reason of all, Travis, my faithful Airedale companion for the past 12 years, died last summer. It was his car as much as mine.

Selling a classic car is a labor-intensive, time-intensive project.

You have to advertise it on sites like UsedCorvettesOnline.com inviting complete strangers to call and make an appointment to come over, kick the tires, drive it around the reservoir, come back and say, “I’ll call you.” They never call. Half the time they don’t even bother to turn up for the appointment.

By chance, I was talking to my friend Wayne Rider, who owns the local bank, and he inquired about the Corvette. He is a car collector and has several classics in a special house he built on the main corner of town.

I told him I was thinking of selling it; the time had come. To which he replied, “Take it down to Atlantic City. The big classic car auction is this weekend.” Then he delivered the closer: “I bought two cars there the last time I went. Bought one, went and had a drink to celebrate, came back in and bought a second one.”

It was a little late for Atlantic City, I thought. The auction was this weekend. And it was Tuesday. But, what do I have to lose?

I called Justin, the head auction guy in Atlantic City who said, “Sure, Renée, bring it down. We’ll sell it for you! No problem.”

No problem? Always a warning.

I called my friend ‘Kenny the cookie man’—Kenny Piersa—my buddy and golf partner, who knows cars. He owns a Pepperidge Farm cookie route in NYC. “I can’t to do this alone, but if you could help it might work.” I think I sounded desperate.

He said ‘Yes,” and gave me instructions.

I called Passport Transport and arranged for the ‘Vette to be shipped to AC on Thursday in time for the Friday night auction session. I made us hotel reservations at the Tropicana Hotel for Friday night. I made sure my office schedule for Friday morning ended at noon.

Passport Transport arrived on time and the Corvette, with it’s hard top included, left for Atlantic City. Kenny and I left Westchester County just after noon, stopped for lunch on the New Jersey Turnpike, (a double whopper at Burger King for each of us and Kenny bought lunch for two active duty Navy men who were in line with us—that’s the kind of guy he is), arrived in Atlantic City at about 3:30 and checked in.

Madhouse! Without passes, tags, instructions (of course we were not ‘preregistered’) we were in a maze. Eventually we found ‘bidder registration,’ were directed to the very back of the gigantic convention center floor to the auction office, and found the assigned number—1535—for my car.

Then I discovered, much to my horror, the subtle (and not so subtle) nuances of selling a classic car at an Atlantic City auction.

There were several ‘prospects’ around the car. But I wasn’t sure if they were looking at the ‘Vette or at the Putnam County mud on the wire wheels. I had noticed walking through the Center that the cars all looked showroom clean. Not so much as a fingerprint on their gleaming paint or a smudge on the mirrors.

Back in the office I located Justin, looking just as I had imagined him. Thirtyish, long sandy hair, black satin jacket, coolly and smoothly attending to details from hundreds of panicky sellers like me.

“Justin, Justin! The car has not been detailed.”

“Don’t worry, Renée. I will have it done right now. Don’t worry!”

With less than an hour before it was to go on the auction block, I wasn’t so sure..

Back we go to the “Vette and a guy says to me, “You know, something is hanging down underneath the chassis. It won’t look good if you take it up on the block and the bidders see that thing hanging down.”

So, Kenny squeezed under the car, yanked on the thing hanging down—a box about four inches square—and broke it free from the wires.  Then I remembered. It was the old Maserati air horn that I had installed years ago—back in my wild and foolish days. It would blare Le Marseillaise, alternating with Dixie, when I would see a friend on the road in Carmel or at the golf club.

Then came the real catastrophe.

Someone asked me if I would “Pop the hood.” He wanted to see the engine and to verify that the engine was the 350 hp as advertised, a very desirable option, and also to see that all the numbers ‘matched.’

A collector car with all numbers matching the original factory installed ones (engine, rear end, transmission, and so on) is worth much more than one with replacement parts.

“Sure,” I said confidently getting in and reaching for the hood release. I found it on the floor of the car complete with about 12 inches of the cable attached. Evidently someone had come by earlier, tried to pop the hood, not gently, and snapped the cable, leaving the handle on the floor, before going off to destroy another car!

Not only was the hood locked down, there is a battery off/on switch under there. Turned to ‘off’ we wouldn’t be able to start the engine.

Besides being berserk, I was now also beside myself!

I couldn’t remember whether the battery switch was on or off. I put the key in the ignition, crossed my fingers and toes, breathed deeply, turned it, and the engine started right up!

Two ‘car guys’ from Pennsylvania tried to get under the car to release the hood. No luck. They found a roving mechanic. He said he would have to jack up the car to get under it to work on the hood release. The jack he found was not high enough. The jack with the car was rusted and frozen. Kenny bought our two friends from Pennsylvania some Heinekens from a bar cart. They kept trying, the Heinekens kept flowing, but there was no way to get that hood open.

A guy came by and said he was a friend of Terry Feehan, a good friend of ours from Carmel. “Call me when you get home if it doesn’t sell, I’ll give you $30,000 for it.” I told him I was putting a reserve of $40,000 on it for the auction, no sale if it didn’t reach the reserve.

I had to decide whether to postpone the auction until Saturday or Sunday in the hopes of getting the hood release fixed, or drive it through as is, hood down.

I calculated the chances of getting the hood release fixed before Saturday or Sunday as slim to none! To get a new cable from Long Island Corvette Supply on the weekend, have it delivered to Atlantic City, and find someone install it within 24 hours? Not likely.

My head was swimming!

I’m a lot of things: ophthalmologist, tennis player, golfer. What the heck! I thought. I’m in Atlantic City. Now I’m adding “gambler” to the list.

I quietly leaned over to Kenny and said, “I’m driving it through!”

I got in the ‘Vette, started her up, and got in the line to the auction block. People swarmed around the car. Several asked me politely to pop the hood for them. I told them that I couldn’t, someone had snapped the cable while looking at the car. I swore to them that it was a ‘numbers matching car.’ One guy said it looked like the hood was bent. “When was the accident?” I swore that it never had an accident, not in my twenty years of owning it.

Another guy said he would give me $42,000 and that I should call him after the auction. So why not bid on it? I thought.

I inch forward. Suddenly Kenny hops in the passenger side. ’’I’m going up there with you.”

The assistant asked, “Would you take 35?”

The auctioneer was about to say “No sale” because it had not reached the reserve. The assistant asked, “Will you take $39,500?”

And then I had to make yet another crucial decision. “Yes, I’ll take it!”

I drove off the block, my hands shaking on the wheel. Our buddies, the cars guys from Pennsylvania said, “Congratulations! You did great.”

Could have fooled me. I was in a daze.

We found Justin. “Justin, it didn’t meet the reserve!”

“OK, I’ll cut the commission in half.” Just like that and he was off to solve another problem.

We had to wait for the papers to be changed to reflect the reduced commission—now only $1,100. The cashier gave me my check for $38,315. She said she was from Mahopac, next town to Carmel, go figure. Everybody is your neighbor.

By then the cavernous arena with all those cars was almost empty of people. We walked by my car and I kissed it goodbye on the stuck hood from me and Travis. We realized my personalized plates were still on it, 819 R, my birthday and initial. We borrowed a screwdriver and Kenny took them off for me.

Imagine the new owner trying to flip it. Lots of luck. Car auctions! All sales final.

We had dinner at Dock’s, a hundred-year-old Atlantic City landmark chowder house, on the way back to the hotel. Over a superb meal of oysters, clams, and crab meat, washed down with plenty of vodka (and gin for Kenny) I learned how to breathe again.

We both deserved to celebrate. I certainly could not have done it without him. And I was pretty proud of myself, too, snatching victory from the salivating jaws of defeat.

In Kenny’s car on the way home I heard from our friend Terry Feehan.

“Renée, congratulations! I heard you did great. You have a new career in sales! My friend said he saw you before the show and offered $30,000. Then he calls back and says ‘She don’t need my help. Sold it for $39,500. Never thought it would go that high!’”

Who would have thought that taking the ‘Vette on its last trip would be such an adventure? I just wish that Travis could have been along for the ride. He certainly would have enjoyed it.

A version of this story appeared in “Spy Night & Other Memories” by Renée Richards published in 2014 by Keith Publications LLC.

Renée Richards new book, Diary 1999—An Eye-Opening Medical Memoir, will be published by Hallard Press on May 31, 2021. It will be available on Amazon and in bookstores. For more information on Diary 1999, visit https://hallardpress.com/diary-1999/.

5 thoughts on “The ‘Vette’s Last Ride”