Wordle is the latest game taking the world by storm! In case you haven’t heard of it yet, Wordle is a free online word game grabbing the attention of people of all ages across the globe.

Originally the online game was created by John Wardle, a software engineer based in Brooklyn, intended solely for his partner, a word game aficionado. After sharing the game with friends and family, Wardle released Wordle (Get it?) in October 2021. It created an immediate buzz. Only two months following its initial launch, more than 300,000 people had joined in on the game and it gained attention from major businesses. On January 1, 2022, The New York Times acquired the game for a mere seven figures, with the promise to keep the game authentic to the original.

The goal of the game is simple: find the five-letter Wordle Of The Day in only six tries. That’s right! You only get six attempts. If you run out of chances before solving the Wordle Of The Day, you must wait until the next day for a new word.

As it was with Wardle’s Wordle, The New York Times will continue to release one game per day. Players must wait patiently for the next new game, garnering consistent players over time. (The website provides a handy-dandy timer for you to track, down to the second, when the next word Wordle will be released). While the rules to the game are straight forward, completing The Wordle Of The Day is more complex. That’s where all the fun is. 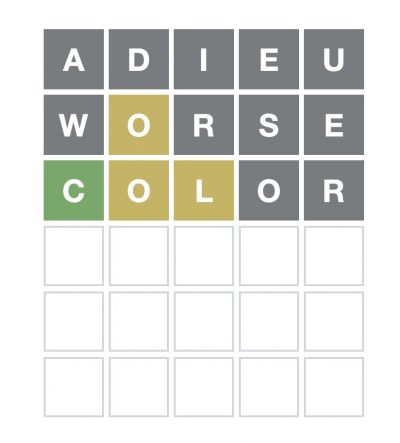 The ever-growing Wordle community online shares many different ideas and strategies to efficiently solve the Wordle Of The Day. Some have suggested making your first word jam packed with vowels such as ADIEU or MEDIA. Others suggest aiming for two vowels and three consonants such as ADORN, CREAM, and WORSE. These strategies aim at getting as many letters correct in the first attempt as possible. The more green and yellow letters in the first attempt, the faster it is to find the correct answer. 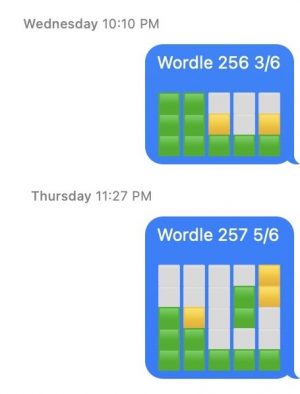 Wordle has now become a part of me and my family’s daily routine. First thing in the morning, I wake up, roll over and play the daily Wordle. Whether the word was easy or hard, I text my results with friends and family to get my day started. Texting about Wordle is a reminder to play the game but also provides a little insight to whether the word will be tricky or a piece of cake. I get to let them know how I did, but they will also send me back their results too. A lot of people also post their graphs to twitter which puts you in touch with the international Wordle community. These posts start lively conversation on a wider scale about the difficulty and strategies of tackling today’s Wordle.

Whether a player solves The Wordle Of The Day or uses all six chances with no success, the results from the game can be shared online or texted. This is way Wordle spreads so rapidly via social media. A graph made of multicolored squares displayed the results. The number of rows indicating how many attempts were made and the colors of the squares illustrating how many letters were correct/incorrect. The graphs show the number of attempts made, so if only two attempts were made before solving the word, only two rows would be shown. The number of the graph is in order of release (Wordle #235 is the 235th Wordle released). This enables you to search online for a specific game.

The colorful graphs have obtained the attention of hundreds of thousands of people across social media, encouraging them to join in on the game as well. Since November 2021, Wordle has accumulated over 1.7 million tweets and the number of Google searches including the term ‘wordle’ has multiplied over 15 times. As of March 1st, 45 million people visited the Wordle Page, equaling the total number of hits on the entire New York Times website.

Friends and family across the globe are sharing their Wordle stats with one another. Wordle has become a new daily discussion point. Questions like “Have you played the Wordle yet?” and “The Wordle today was a bear!” comes up regularly in conversation. Discussing the game can be the building block to a new friendship or just something entertaining to talk about around the dinner table. Either way Wordle is building a larger and larger community every day. Almost everyone can find something to enjoy playing Wordle. 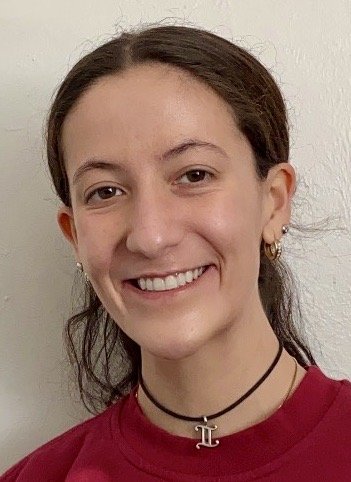