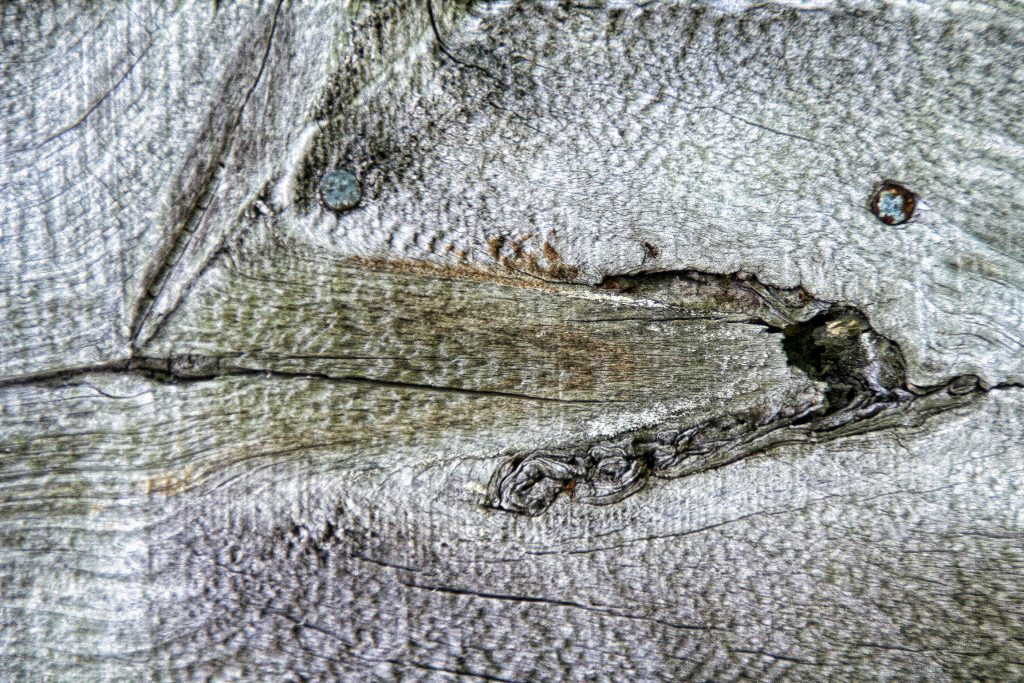 For some people the photo above is just piece of a weathered board fence. Others see an image of a one-eyed wolf. Or a projectile-vomiting wombat? Or Jovian storms. Two blue planets floating in space? The brain sees things that aren’t there.

Pareidolia (“parr-i-DOH-lee-a” – It’s the Word of the Day; use it in a sentence.) is the brain’s ability to see “the man in the moon” or faces or animals in clouds and rocks and lines on linoleum flooring. The brain, especially in visually attuned humans, quickly and easily turns a random pattern of lines and points into a recognizable image.

For most people it’s just part of a healthy breakfast. But for a few others it’s an image of the Virgin Mary burned into a slice of whole wheat toast. It’s also highly marketable on eBay.

There may be some connection between pareidolia and obsessive-compulsive disorder. The brains of OCD-ers apparently readily infer the random into the constructed. Most of us, too, are always trying to make something recognizable and understandable out of the visual chaos that surrounds us. A couple of twisty lines, a hole and blob meld into a flying cow and we’re immensely fulfilled.

Take the ubiquitous emoticon, for example. A yellow circle with two dots and an upward curved arc. Everyone recognizes it as a happy face. Turn the arc over and it’s a sad face. From a logical viewpoint it doesn’t even resemble a face. No nose, cheeks, ears, hair, teeth, chin or eyebrows. And not many of us have a perfectly round face. Nor is our complexion neon yellow.

It’s fun to play with pareidolia. Look at a random image. See a face? Now look away for a few seconds. Now try to find the face again. If the background image is complex it may take a while to find that particular face once more. In the meantime, we often find other faces while looking for the first one.

Faces seem to dominate in pareidolia. But, notice how babies look at us. They stare at our faces. With good reason. It’s difficult to get much emotion from a kneecap or shoulder blade. But faces? There’s a whole book written on it that can change with every passing second.

We humans recognize other people by looking at their faces. (Dogs, on the other hand, seem to prefer sniffing butts.) And although the faces of identical twins may seem the same, there are differences. Like fingerprints. That’s why both brain-based and software-based facial recognition programs work so well. So faces are very significant to humans. And much more socially acceptable than the aforementioned canine technique.

But there are often two sides to the coin.

Some people cannot recognize faces at all. Prosopnosia is a neurological disorder where people have the inability to recognize faces. “Face Blindness” is a huge problem. You meet your mother at the mall, and you don’t recognize her. How can you ever get to know someone when you don’t know who they are the next time you meet? Maybe everyone could wear one of those convention name tags: “Hi, I’m Kevin from Accounting.” You look at your spouse on the other side of the bed in the morning and wonder, “Do I know you?”

For those of us with some OCD in our makeup, let’s keep looking at the ceiling, floor, clouds, and knots in boards to see what we can see. It’s amazing what you’ll find.

Your project for the day: Stare at clouds, rocks, random flooring/fencing/spacking and food to make order from chaos in the form of faces, religious icons and sundry animals. Have fun. Report back below.

2 thoughts on “The Mystery and Comfort of Pareidolia”