The Festival of Lights

When we, as present-day inhabitants of Planet Earth think of miracles, our thoughts turn to religious stories. These narratives have been passed down through the generations.

In many instances, different peoples, believing in various modes of spirituality, have been saved through divine intervention. Such is the case of the Jewish people.

According to the Jewish calendar, Chanukah, the Festival of Lights, will be celebrated for eight days beginning on 25 Kislev. This date corresponds to December 10, 2020.

The Jewish calendar is based on the lunar cycle of 28 days per month. It is the reason Chanukah celebrations shift from year to year on the Julian calendar we all use.

The origin of the holiday can be traced back to 165 B.C.E. A small group of soldiers, the Maccabees, victoriously fought against King Antiochus of the Seleucid Empire and his Greek warriors.

After the fighting was over, and the rededication of the Second Temple, a miracle occurred. Oil left in the defended temple was only enough to light the lamps for one night. But the precious processed olive oil lasted for eight nights, until a new batch of pure olive oil could be replenished. The process to purify olive oil took eight days.

Jews around the world celebrate Chanukah for eight days commemorating the event. During the eight days, a menorah, or candelabra with nine branches, is lighted. Each branch holds one candle. Eight candles represent the eight nights the oil lasted in the Second Temple. The ninth candle is the shamash, or helper to light the other candles.

Since most Jewish holidays involve eating delicious food, Chanukah is one of those joyous occasions where food accompanies the festivities. Fried foods, such as latkes, or potato pancakes, and sufganiyot, or jelly doughnuts, are on the menu.

Not only is there eating but singing songs and playing dreidel as well. 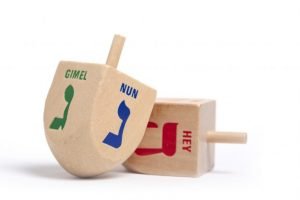 Dreidel is a gambling game played with candy coins composed of gold-wrapped chocolate rounds and, of course, a dreidel. The playing piece is a top which is spun on a flat surface. There are four Hebrew letters painted on the dreidel’s four sides. The letters gimel, hey, nun, and shin represent the saying, “a great miracle happened there”. In Israel a letter is replaced to change the phrase to “a great miracle happened here”.

How to Play Dreidel

The game is played in a group setting, with each player beginning with an equal number of game pieces, usually chocolate Chanukah gelt, or coins. Each player contributes from their game pieces to a collective pot, which portions or all of it can be won depending on the Hebrew letter the dreidel lands on.

What the value of the Hebrew letters are.

Gimel = receiving all game pieces from the pot.

Hey = receiving half of what is in the pot.

Nun = nothing from the pot.

Shin = the player must add one game piece to the pot.

The game continues until all the game pieces are won. 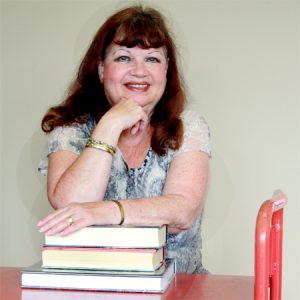 Beverly Ann Meyers is a published author, writing for over twenty-five years. To her credit, her first published work, a short story, A Scent of Jasmine, has been published online by Bewildering Stories.

She is the author of a supernatural novel, Go to the Wish Monger and has written a murder mystery series, Pinned for Death, and Auditioned for Death.

She is currently writing another in the series, Fired for Death, which should be published early in 2021.

A fictional memoir, Angela’s Secret, will also be published early next year.

Beverly has attended several writer’s conferences and is a member of The Wannabees and the Writer’s League of The Villages and holds the position of Historian for the WLOV.

A former middle school teacher, originally from Philadelphia, PA, she presently resides with her husband, Martin and her cat, Callie, in Florida.