Welcome to the most desolate, inhospitable, freakiest, place I’ve ever encountered. The Skeleton Coast of Namibia was a safari I salivated for for many years. This was not going to be the Five Star luxury I’ve sometimes enjoyed. Nor was it going to be the Three or Four Star luxury that was far more typical of my safaris. Nope…this was getting right to that level between “bring your jacket or freeze” and “don’t worry that’s only the 3rd spare we’ve used today, we’ve still got one to go”. Welcome to the Skeleton Coast!

After two hours our single engine Cessna Caravan turbo-prop begins to descend. The landscape hasn’t changed much for several hundred miles except now there are more desolate looking peaks and valleys. Bleak and no signs of life…of any kind. What could I expect? We were flying over the most restricted portion of the oldest desert on the planet. Yes, the oldest! Older than the Sahara (probably by about 50 million years, give or take a few million) or even the Gobi Desert of Mongolia. The Namib Desert of Namibia is the winner. Oh, I should mention that my destination was a very special portion of the desert…the Skeleton Coast National Park, a 6,500 sq. mi. section running about 300 miles along the Atlantic coast right up to the border with Angola (hmm, more geography). Only 800 permits were issued per year to enter this park (I told you it was restricted). Twenty years ago this was considered by some old-timers to be the most remote and potentially adventurous safari in Africa. If you asked me what I thought the end of the earth looked like I can show you. In fact the Bushmen (tribe) call it “the land God made in anger”.

So, here we are…the most unique safari destination in Africa. One of the roughest sea coasts washing directly into the least hospitable desert on the planet. Well named for all the boat, whale, animal and yes human skeletons collected here over the years. OK, pretty dramatic so far? I can just about picture the look on your face now…..what the heck is he going there for? Might you also be questioning my sanity or at least my judgement at this point? While I can’t argue with what you’re thinking right about now, I can try to show you some of the unique reasons why I had to do this particular safari. 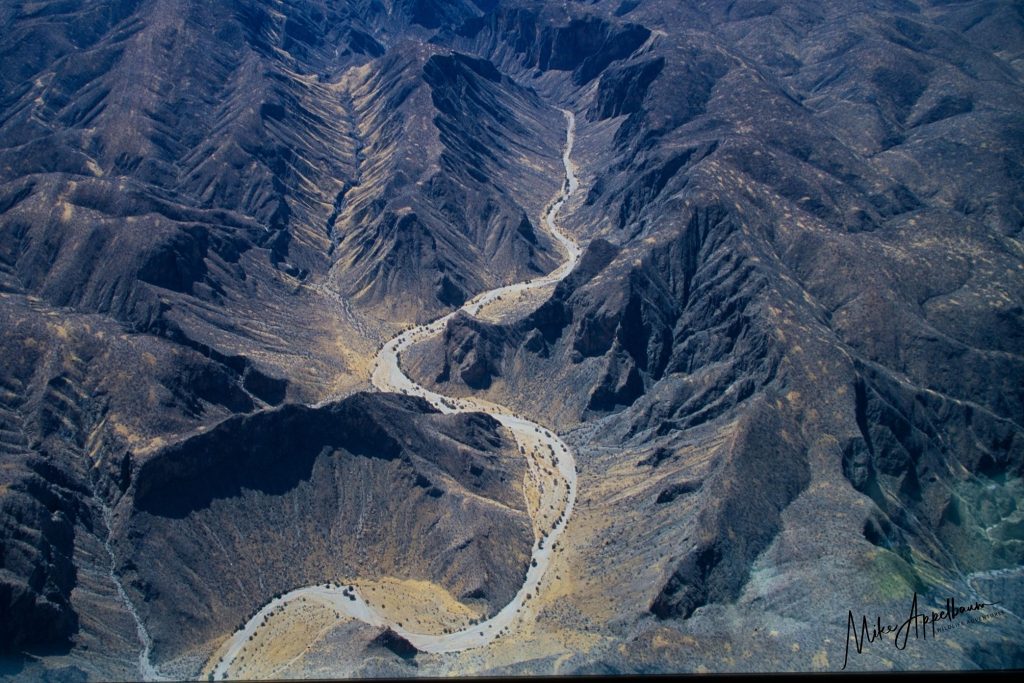 So, where to begin….? A place so remote that even the vegetation has trouble finding it. The larger animals living here have evolved with special coping mechanisms to survive. Elephant, lion, brown hyena, giraffe, rhino and others have evolved as desert dwellers with characteristics and behaviors that allow them to survive. While the absence of water is typical of a desert, the eerie, cold, foggy mist that arrives like clockwork through the night and into the morning gives you the feeling you’re a character in a Steven King novel.

As for Mother Nature, well, you might think this creation was just on her bad day, but hold on a minute….This place is amazing! The Skeleton Coast is fascinating. Wildlife isn’t the only thing Africa has to offer. Of course, there’s a story for everything so bear with me if you can.

My camp is only five sleeping tents and a dining tent with a “lounge.” As you can imagine it is located in this thriving metropolis of….well, nothing. 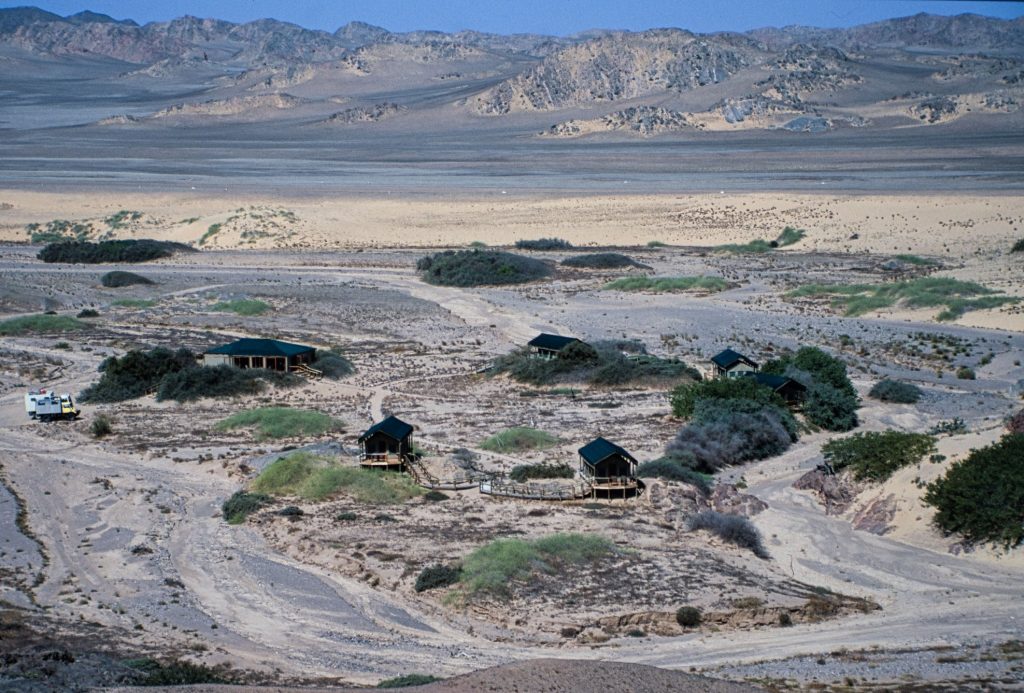 Our very first morning game drive is unlike anything I’ve ever experienced. The drive from camp had already taken over two hours and just like you right now, I had no idea where we were or where we were going. There were no landmarks…none! By that I mean none that you knew would still be there the next day. Oh hell, if it was windy enough even the next few hours. The track we were driving on (notice I said track, not road) was being created as we drove. So, if you have a cynical mind, you might just think the track won’t be there for your eventual return. 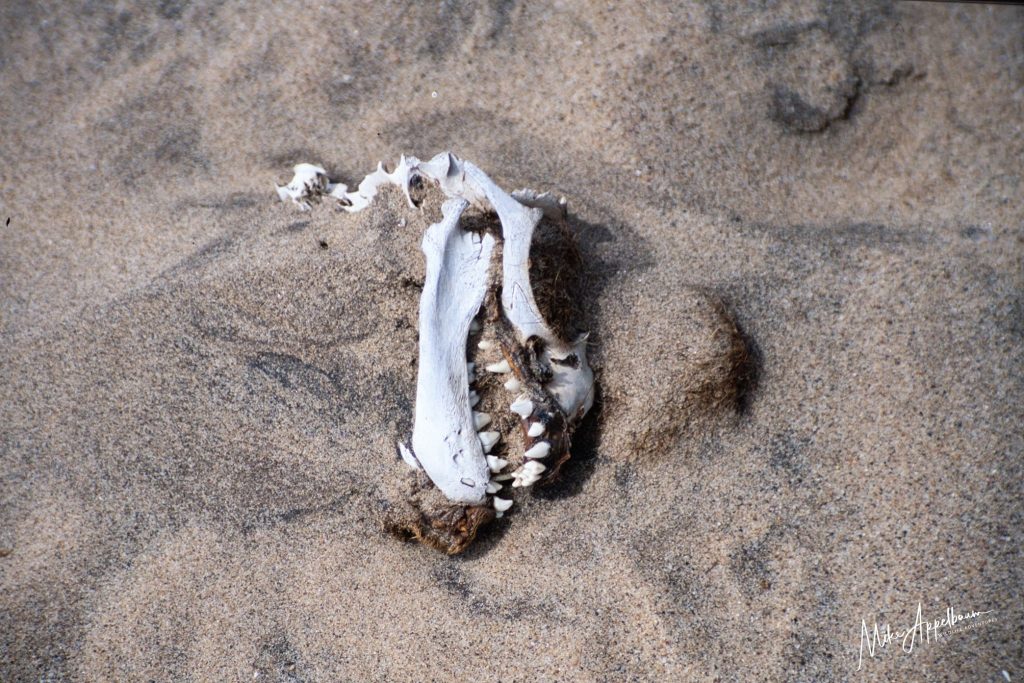 I believe by now you also noticed the first, rather telling image. That one was a predator, (you know with big sharp teeth) and he didn’t fare too well out here. This is called the Skeleton Coast for one heck of a good reason. Need I say the most important person in the world was my new BFF…FESTUS, our favorite, wonderful, all-knowing guide….who was about to be strangled if he didn’t let us in on his game plan.

Our destination…we were headed to the source of the mysterious fog that envelops our camp every day. Flowing north along the Atlantic coast of Namibia all the way from Antarctica is the icy cold Benguela Current. This spectacular flow of water carries with it an amazing amount of nutrients as well as another feature of the Skeleton Coast…whale carcasses. Yes, believe it or not (trust me here, just believe it) the current is so strong that the bodies of dead whales are carried north and deposited right here. This wild surf pushes everything and anything, including numerous shipwrecks, right into shore and allows nothing back. As you can see, the whale bones have also become part of the Skeleton Coast signature. Where else in the entire world can you see whale bones in a desert?

Well, if I haven’t lost you forever, stay tuned. Next time I’ll show you why the Skeleton Coast may be a place you never knew existed, but a location even the most experienced traveler will never forget. 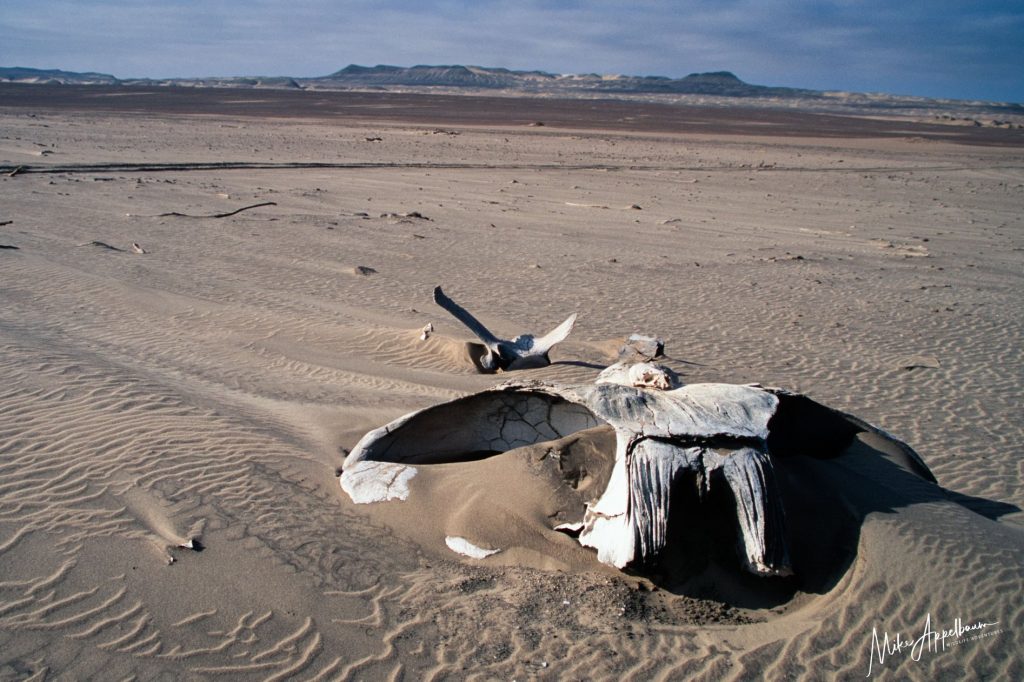 To be continued next month …

Other Posts by Safari Mike:

The Meanest Critter in the Neighborhood

One Tall Drink of Water

4 thoughts on “The Incredible Skeleton Coast”