Most people call me “Ash.” Mother calls me “Ashton.” On the cover of my books, I use the name “Ash Noble Siringo.”

The fog was thick in Seattle, the kind that makes you feel like you’re floating through a cloud. Pedestrians with umbrellas bumping crowded the sidewalks. I pulled my hood snugly, shivered, and stuffed bare hands into my pockets.

“Why,” Mother often asked, “do they always have to be about somebody killed?”

“Has to be about something significant, unusual, or it wouldn’t be a story.”

Mother detests guns. I’ve killed many people in novels, but I don’t know if I could in real life. Maybe I could kill to save someone.

My shoulder bumped someone coming toward me, or maybe he was standing still. “Excuse me! I didn’t see you.”

He stood still and looked at me. I started to go but stopped when I noticed such intensity coming from his eyes even with the night setting in, and he standing in a shadow.

“It was my fault,” his voice was mellow as he stood without moving, his eyes on me.

“Your picture’s on your book.”

“I’ve read all your books.”

“Yeah? All fifteen?” I shot a glance out to the street. “Have you ever seen fog like this?” I forced a laugh, and it made me cough. “Feel wet all over.”

He wore a long, black trench coat and had an abundance of damp gray hair with strands on his forehead.

See, I’ve never related well to people, bad at conversation, but with this stranger, words tumbled out, “Live over there in that five-story brick. Mother and I moved here about fifteen years ago.” I cleared my throat, coughed, and swallowed. “She’s not there right now. She’s in, she’s in the hospital.”

“Dianne. That’s her . . . Well, she’s been ill for a while.” I shivered, gazed into the fog, and choked back tears. Why did I feel a need to explain to this stranger? Others were passing. I closed out their presence.

This man, probably in his seventies, about the same height as me, had an eerie presence. Yet, despite uneasiness, my inquisitive writer’s mind held me here. I pulled my hood tighter, “It’s chilling to the bone!”

“I’d buy you a cup of coffee,” the man’s voice was like velvet.

“Well,” I looked across the street, “I was on my way to that café over there on the corner. Too foggy to see the name. Fabulous tea and little shortbread cookies.”

He looked and nodded.

“I’m a writer, not a conversationalist.” We walked side by side as we crossed the street, dodging other pedestrians. “Don’t have friends. Mother’s all I’ve got.” I opened the door for him.

I selected a table with no one near, slid on the hard bench seat, and waited for him to speak. After removing his trench coat, he sat with arms on the table and looked directly into my eyes.

“See, people don’t really like me. I don’t know why—don’t fit in, I guess.” There was a comforting nature to this older man, and I felt drawn to him. “Mother said I needed a father in my life.”

I scratched my head vigorously. Sometimes it would just start itching. “Mother told me my reaction to situations was too intense. ‘Look for the smooth path, Ashton. You always find the bumps.’”

The hot tea calmed me.

“I know,” the stranger said.

“What do you mean? How could you know?” The waiter set a small plate of cookies in the middle. “Try one. You don’t know me.” I watched him break off a piece. “I do that too, break off a bite at a time.” I eagerly watched him taste the cookie, “What do you think?”

“Excellent. I’ve always liked these.” His grayish eyes looked at me, “I’m a lot like you.”

Something familiar was present in his eyes. We sat in silence, sipping the hot tea and munching the crumbly cookies. I looked up. He was looking at me as I scraped the crumbs together with my palm.

“Change yourself, Ash. Do it while still young. You’re going to have a difficult, unhappy life unless you can loosen your grip on everything around you. When your mother’s gone, you’ll need other people. Open up.”

I rubbed my forearms, “You talk like you know me?” He said nothing. “How?”

No answer came from him as we ate in silence.

I picked up the ticket and paid. The air outside was saturated. My cell phone sounded, “Yes.” I listened to a voice that slipped through the sounds around me and told me my mother had died. “Oh. Thank you. I’ll be there in . . .” I let my voice trail off as my hand fell downward, and my eyes glazed.

“You can make it through this,” the silver-haired man touched my arm.

I scratched my head, thinking about the voice on the phone, followed by the velvet voice of the man. I looked at him, my eyes wet, “How’d you know?”

“Why don’t we go to your apartment? Not a good time to be alone.”

“But, you don’t know me.” Turning to walk away, I took three steps, paused, and looked back, “Okay.”

I watched him in the crosswalk until he got to the center of the street and nearly disappeared in the fog. Was he real?

At my apartment door, I fumbled the keys with a shaking hand, and my eyes flooded. “My stories scare people. I like to do that. Readers like that.” I wiped my eyes and shot a glance at him, “Do I know you?”

“Sorry. There’s just something that seems so,” I drew a deep breath and coughed, “like I’ve seen you.” I laughed, “Is that crazy?” I opened the door.

He shook his head, then draped his damp coat over the back of a chair.

I grabbed it, “Mind if I hang it? People don’t come around often. In fact,” I coughed again, “they look the other way when we pass—people I see here in the building.” I removed my shoes and motioned for him to follow me into the parlor. My nose started to run, and I wiped it quickly with my finger.

He ran a hand through his hair to shake off the wetness. There were slight crinkles in the corners of his eyes. “Listen to me, Ash. You’ve relied on your mother your whole life to make your decisions. You understand that, don’t you?”

I pulled out a handkerchief, blew my nose, and stuffed it back into my pocket, “Weren’t you cold out there?”

He shook his head, “I know your mother.”

“Oh.” His eyes were like steel as I spoke with trepidation, “I don’t remember you. Where?”

I jerked upright, “I was young when we left. I wouldn’t remember you.”

“Do you want me to go with you to the hospital?”

“Why?” I stood, “Probably not. Me running into you by accident wasn’t just an accident, was it?” I stared at him, my mouth slightly open.

He looked at the photograph of three college kids on the table and picked it up.

He nodded, “Don’t let yourself slip over the edge, Ash. It’s a hard fight back. You know that you have to fight this feeling of desperation coming over you. Don’t give them a reason to put you away.”

My head itched. “My nose always runs in this weather. Mother says to use Benedryl.” I coughed, cleared my throat, and thought about his advice. “I’ll just keep writing. My last one didn’t sell well. There’s a ghost in this one. Do you, do you believe in ghosts?”

His intense eyes stayed on mine for what seemed like minutes, but he didn’t answer.

“Well, you don’t have to say if, I mean, if you don’t really believe it.” I looked at my watch, “I should go on to the hospital.” I stuck my arms into the sleeves of my jacket and went to the door.

He got his coat and followed behind me. Once outside, we faced each other.

“You don’t really care about my novels, do you?”

“I care about you.” His face was sad, but the crinkles were still there at his eyes.

A tingling feeling ran along my spine, “Are you my father?” I was becoming short of breath.

He paused as a pedestrian passed near us, then took my arm. “Don’t you know, Ash? I’m you.”

I looked at the street and his grip slipped off my arm. 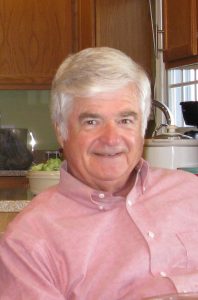 David Maurer began writing stories in grade school and continued through my his college years.  Almost no creative fiction writing took place during his engineering career.  Writing and singing on a more professional basis are his true life goals. Now retired, he have the opportunity to do both.  Playing with a reader’s emotions in songs or in prose, whether happy, funny, sad, or frightening,  gives him great fulfillment.  “Such will keep me going for as long as my mind and my body will allow. “

David’s short story was one of several chosen to be read aloud at a recent Writers League of The Villages event held at Mystic Ice Cream.

2 thoughts on “The Fog Lifted”