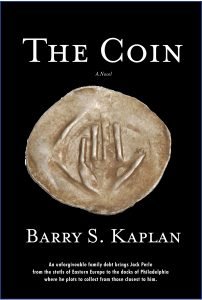 Nearly a year had gone by since Rebecca and Jacob moved into the rectory. Every day, Rebecca hoped to learn some news of Aaron’s whereabouts, but no one heard anything about him.

A few weeks after ‘the explosion,’ there had been rumors about the death of two of the tavern’s customers in a failed assassination attempt near Jelzai. Rebecca wondered whether Aaron had anything to do with it, but no one seemed to have any detailed information.

The young mother felt that she was in limbo. She spent her days helping the housekeeper do chores around the church. Sometimes, she would scrub the floors and dust the pews of the house of worship. At such times, she felt at peace, surrounded by burning candles and the silence of the nave.

Each Sunday, the priest invited her to join the congregation at worship services. He tried talking to her about the Savior and the importance of saving her soul and the soul of her son. He frightened her when he thundered,

“Unless you and Jacob accept baptism, you will never get to heaven and will go straight to hell!”

Rebecca was uncomfortable with these attempts to convert her. She knew he was well-meaning but, while she felt grateful for the kindness extended by the church, remained quite uncomfortable in the presence of the many crucifixes and renderings of Jesus on the cross, bleeding and tortured. To give up the religion of her birth seemed a betrayal of her identity, of the essence of herself.

I can’t keep saying no to them and continue to accept their generosity at the same time. We can’t stay here much longer, but where are we going to go?

Jacob continued to be a problem for his teachers. He refused to cooperate in almost any activity. When Sister Annemarie tried to work with him on a one-to-one basis teaching him Bible stories and the catechism, he would throw the books on the floor and refuse to listen.

“I don’t want to learn about Jesus Christ,” he would shout. “I’m Jewish!”

The teacher was about at the end of her rope.

Almost every day, it seemed, the other boys in the class would find something to taunt Jacob with and Jacob would respond with violence.

“The Jews are Christ-killers,” they would whisper to him so Sister Annemarie couldn’t hear.

Around Easter, they taunted him, “Stay away from Jacob! He needs some Christian blood for Passover.” One of the boys squeezed a handful of cherry juice on his clean white shirt. “Here is some blood, use this!”

“Go to hell,” he snapped at his tormentors, not attempting to modulate his voice. Then Jacob would get out of his seat and punch whichever boy happened to be the torturer of the day. The result was more paddling, and Jacob’s buttocks began to develop chronic blisters that often became infected. Still, he persisted in his behavior.

One day at lunchtime, a group of six boys tried to pin Jacob down and stuff pork into his mouth. He spat out the non-kosher meat, wriggled free, and slammed into the six classmates standing around him. This was one of the few times when Sister Annemarie witnessed most of the action. That day it was the other boys who were paddled, much to Jacob’s pleasure.

At least she can be fair sometimes.

However, the pattern remained unchanged. The nuns told Rebecca that her son was incorrigible in class.

“Why do you get in such trouble?”

“Because they call me names and say I’m a dirty Jew.”

Jacob did not want to argue with his mother, but he knew, at some very deep level, that, if he ignored them, he would be giving up his personal dignity, of which he had precious little.

I can’t give them the satisfaction.

Jacob did, however, manage to master the reading and writing of the Cyrillic alphabet. He seemed to have a gift for languages and was a quick learner.

One Friday afternoon, Rebecca and Jacob were sitting in the park across from the church when they ran into Nafty the brothel owner on his way home for the Sabbath.

Jacob ran to him and gave him a big hug.

“It’s so good to see you!” cried Rebecca, kissing him on the cheek. “We’ve missed all of you so much.”

Nafty was pleased with this reception.

“I don’t like where I am, and I know I’ve got to find another place to live and work. But I’ve been waiting for Aaron to return. I just know he’ll be back soon.”

Nafty’s eyes shifted to the ground and he seemed to shrivel up some.

Rebecca saw the change in his demeanor.

“What’s wrong, Nafty. Tell me. What do you know about Aaron that we don’t?”

“Aaron won’t be coming home, Rebecca. We heard from friends in Jelzai that he’s recently gotten married and is preparing to leave for America with his new wife.”

“No, that can’t be,” sobbed Rebecca. “He already has a wife and a son. He wouldn’t leave us here alone.”

Jacob said nothing, but tears formed in the corners of his eyes.

Rebecca knew what she had to do. That night at dinner, she asked to see Father Ignatius.

“Thank you, father, for all you’ve done. I know we’ve been a real problem for you, and I appreciate all the chances you’ve given us.”

She recounted her news to the priest and informed him of her plan.

“Jacob and I will be leaving tomorrow. We’ll be taking the morning coach to Jelzai to bring back Aaron. I’m sure this whole marriage business is some kind of mistake.”

“I hope you’re right, Rebecca. You’re a strong-minded young woman who knows what she wants.”

The priest placed his hands on the heads of the mother and son.

“May you travel with God,” he intoned.

Rebecca and Jacob arrived in Jelzai three days later. She had used the salary that Meir had given her to pay for their fares and food. She had just enough left over for three coach fares back to Vilna.

Jacob had never been out of Vilna. To him, the trip took on the characteristics of an adventure. His mother had told him that he would see his grandmother and grandfather. He was impatiently looking forward to this because all his classmates had family, and he wanted to be able to say, “My grandparents live in Jelzai. We just came from a visit.”

Rebecca alighted from the coach, took her son’s hand, and headed toward the old Pechtrowicz bakery. She was stunned to find it boarded up and empty.

The mother and son walked next door to the butcher shop.

“Where are Yitzchak and Rivka?” she asked Chaim the butcher, a note of desperation in her voice.

“They died in the flu epidemic,” Chaim replied. I give you my condolences.” He knew that Rebecca was Rivka’s sister but wondered about the young boy.

“He’s living with his new wife in the house of her father, Asher Rozin. They’re leaving for America in two days.”

Rebecca felt like a bullet had just pierced her heart. She had to sit down on the bare ground to keep from fainting.

“I can see your sister’s death is a shock. Can I get you a drink?” asked the solicitous butcher.

Rebecca accepted a glass of water from her former neighbor.

“Can you give me directions to the house of Asher Rozin?”

The distraught mother and son found their way to the house. With trepidation, Rebecca lifted the heavy brass knocker and rapped three times.

The door was opened by the housekeeper. “Yes?”

“May I please see Aaron Pechtrowicz?”

“Who shall I say is calling?”

“His wife and son,” replied Rebecca with a defiant wave of her head.

The puzzled housekeeper thought the woman was crazy, but she called Aaron to the door.

Aaron was dumbstruck to find them waiting on the steps.

“Papa!” cried Jacob, as he ran up to his father and wrapped his arms around his legs, the only part of his body he could reach.

“What are you doing here?” Aaron screamed at Rebecca as he pushed Jacob away and stepped backward.” I told you I was never coming back. Get out of here!”

Rage was building in his voice. He herded Rebecca and Jacob away from the house so as not to be noticed by his wife or her parents.

“But Aaron, how can you abandon us? How can you let Jacob grow up without a father? We have nothing, no money. What are we to do? Where are we to go?”

By this time, Aaron’s rage was out of control. He pushed Rebecca away.

“I’m leaving for America, and I never want to see you again. Do whatever you must do. I don’t want to hear about it.”

Aaron stuck his hand into his pocket and pulled out the money that he had on him.

“Take this,” he said and threw the bills and coins on the ground in front of Rebecca.

Turning to go, he stuck his hand under his shirt and pulled out the pouch containing the coin.. His visage softening a bit, he yanked it from his neck. Turning to face Jacob, he hesitated and then tossed the pouch to his son, as if the sacrifice of his treasure would ease the burden of guilt on his heart.

Jacob picked up the pouch as Aaron turned away.

“You’ll never see me again,” he declared. “Don’t try to contact me.”

Then he marched back toward the house where his new wife, in the early months of pregnancy, had been watching, eagle-eyed, from the top of the stoop. She slipped back into the house before he noticed her there.

At the top of his lungs, Jacob screamed, “Papa! Papa! Don’t leave me! Take me with you! Please!”

Jacob fell into a sobbing heap as Aaron entered the house and slammed the door behind him.