Albert Wan ran Bleak House Books, an independent bookstore in Hong Kong, for nearly five years, before closing it in late 2021. The changing political climate and crackdown on dissent within Hong Kong made life too uncertain for Wan, his wife and two children.

As they were preparing to move, Wan packed a box of books at risk of being purged by the government. He brought them on a plane back to the United States in January and donated them to the Internet Archive for preservation. 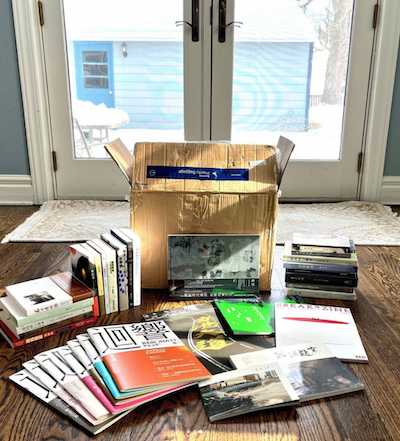 The collection includes books about the pro-democracy protests of 2019—some photography books; another was a limited edition book of essays by young journalists who covered the event. There was a book about the Tiananmen Square massacre and volumes about Hong Kong politics, culture and history—most written in Chinese.

“In Hong Kong, because the government is restricting and policing speech in a way that is even causing libraries to remove books from shelves, I thought that it would be good to digitize books about Hong Kong that might be in danger of disappearing entirely,” Wan said.

“I thought that it would be good to digitize books about Hong Kong that might be in danger of disappearing entirely.”

Hearing that Bleak House Books would be shutting its doors, the Internet Archive reached out and offered to digitize its remaining books. As it happens, Wan said his inventory was dwindling quickly. So, he gathered contributions from others, and along with some from his own collection, donated about thirty books and some periodicals to the Internet Archive for preservation and digitization. Wan said he was amazed at how flexible and open the Archive was in the process, assisting with shipping and scanning the materials at no cost to him. (See Hong Kong Community Collection.)

Now, Wan wants others to do the same.

“There are still titles out there that have never been digitized and might be on the radar for being purged or sort of hidden from public view,” Wan said. “The hope is that more people would contribute and donate those kinds of books to the Archive and have them digitized so that people still have access to them.”

Do you have books you’d like to donate to the Internet Archive? Learn more.

Wan said he likes how the Internet Archive operates using controlled digital lending (CDL) where the items can be borrowed one at time, not infringing on the rights of the authors, while providing broad public access.

Before his family moved to Hong Kong for his wife’s university teaching job, Wan was a civil rights and criminal defense attorney in private practice. Now, they are all getting settled in Rochester, New York, where Wan plans to open another bookshop.