Pine wreaths decorated the ornate altar, where the old priest struggled to finish the Christmas mass.

Monsignor Joseph Cardone faltered and stumbled over each passage, even though he knew the liturgy by heart. Cold sweat beaded his face and dropped onto the Missal he held with trembling hands, each drop bleeding the print into a dark blotch within the spreading circle of moisture. He squinted, but the blurred words floated aimlessly in front of him. Twice he lost his place.

“And the angel said unto them, Fear not: for behold, I bring you good tidings of great joy…,” Cardone repeated as the Missal shook in his hands.

He knew what he’d done was wrong and feared the price he was about to pay for his sins was going to be high.

In spite of his transgression, he believed he was a good man and a faithful servant. Had he not served God well, devoting his life to the people of the parish? What he had done was for God’s glory, not personal gain. But he had sinned, and the wrath of God was mighty. He secretly cursed God, and at the same time, prayed for forgiveness.

What he thought the day before was a mild flu had suddenly turned into a malevolent invader that raged through him. The alb under his chasuble was soaked with sweat, and clung to his aching body. His heart pounded against his sternum. The Monsignor struggled to fight back a feeling of impending doom.

For Monsignor Cardone, the past hour had become a distant fog buried somewhere deep within his brain; he now struggled with something much more important than the Christmas liturgy.

He clutched at his collar and pulled it away from his neck. His throat constricted, and his voice grew weaker until it was a barely audible rasp. After mouthing a faint and scratchy, “The mass is ended, go in peace,” He made a quick sign of the cross and, desperate to get to the cathedral doors, moved down the aisle past the parishioners who stared at him with concern.

His face contorted in anguish as he gasped for air. The high, vaulted ceiling with faded frescoes three stories above the sanctuary seemed to close in on him, smothering him.

The combined adult and children’s choir began to sing, softly at first, their voices from the choir loft settling on the congregation below like falling snow. “Silent night, holy night, all is calm, all is bright…”

But the monsignor did not hear the strains of the carol; the only sound that registered in his brain was a deep, baleful wheeze that rose from his own chest with each labored breath.

Mind and body battled for his attention. His brain screamed for oxygen as a bone-chilling fear rose from his gut: the primal fear as old as life itself—the fear of impending death. The old priest ripped at his collar, trying to loosen it as he strained for air.

Muscles, suddenly devoid of tone, failed him. Just moving his diaphragm to breathe became a monumental effort, each breath agonizing and slow. His eyelids scraped across his dried cornea with each blink, and his legs buckled.

When the priest faltered, one of the altar boys following behind him moved to his side and took his arm to help him the rest of the way to the rear of the church. Cardone’s mouth hung open as he gasped for air. His entire body was now drenched in cold sweat.

The young assistant priest, Father O’Higgins, stood by the doors. As the Monsignor grabbed at the assistant’s robe for support, he looked up to see horror registered on the young priest’s face.

At that moment, Monsignor Cardone knew he was dying.

An EMS van, caked with snow and flashing lights, raced up to the emergency entrance of University of Chicago Hospital, the fifth to arrive in as many minutes. While the rest of Chicago quietly observed Christmas, the emergency department was a madhouse of activity as the staff rushed to evaluate and treat a multitude of medical problems.

The ER staff had been dreading this holiday rotation in the emergency department. Holidays in the ER were chaotic, but Christmas was always the busiest and the craziest. In addition to swallowed toys, sledding accidents, frostbites, and cuts from broken tree ornaments, there were the usual alcoholic binges, drug overdoses, and suicide attempts among those whose expectations went unfulfilled.

An ER staff doctor pulled back the curtain to holding room 14 and turned his attention to the newest admission, an elderly priest with severe respiratory distress. He flipped the chest x-ray onto the viewbox. “Damn, look at that,” he said, scrutinizing the details on the film. A dense pneumonic infiltrate flooded both lungs, choking off the tiny alveolar air sacs and depriving the body of oxygen.

“Hell of a pneumonia,” one of the residents said over the ER doctor’s shoulder.

“Maybe,” the ER doctor replied. He leaned closer to the film as if the answer lay hidden somewhere within the dense mess. “Aspiration, Legionnaires’, toxic lung… could be anything. Could even be SARS.” He turned to the resident. “If that’s a pneumonia, it’s one of the worst I’ve seen. Got his blood gases backyet?”

The resident pulled a slip of paper from his pocket. “His PO2 is only thirty percent. And that’s with nasal O2 running at six liters.”

“What else you got on him?”

“Cardiac enzymes normal. Electrolytes normal, but he was acidotic. I ordered an amp of bicarb.”

“Who’s his doctor? Any medical history on him?”

“No medical records here,” the resident answered, obviously pleased that he had checked that. “They’re at the clinic. He’s Willard’s patient, but Willard’s not on call and we can’t reach him.”

The staff doctor nodded. “Get blood cultures on him, then start him on I.V. Amoxicillin.” He put his stethoscope against the priest’s chest and bent over him to listen. Through the earpieces came loud, coarse, wheezing sounds from bronchi that were choked with thick secretions.

The priest was barely conscious, his eyes were glazed, and every fiber and muscle were spent trying to get air into his oxygen starved body. A nasal cannula fed oxygen into his nose. Aminophylline, a potent bronchodilator, dripped through an angiocath taped to the back of his withered hand. The priest seemed to shrink as his blood pressure dropped and his life ebbed. His eyes were barely open and unfocused. Then the priest’s lips moved.

The resident bent down to listen. “It sounds like he’s apologizing for something. What do you think that’s all about?”

“He’s Catholic—they always think they’ve done something wrong.” The staff doctor leaned close to listen to the priest’s breath sounds through his stethoscope. He noticed a strong odor on the priest’s breath. It was a familiar smell, but he couldn’t place it. Things were deteriorating fast. A small trickle of dark fluid oozed from the corner of the priest’s mouth. His cold bluish-gray skin hung loose and gave a dead aura.

“I think we’re losing him,” he snapped. “I don’t know what the hell is going on. Let’s intubate him and get him onto a vent. Call ICU and let them know they’re getting a new admit. Put him in isolation until we find out what this is.”

But that decision turned out to be meaningless. He noted a faint movement of Cardone’s lips again, as if he were saying a prayer, then the priest suddenly grew still. Just as quickly, his body relaxed and sagged into the gurney.

His struggle was over.

The ER doctor stood up and stared down at the lifeless priest. Again, he noticed the odd odor that came from the priest’s mouth. It was familiar. Then it hit him.

The smell on his breath was mildew.

He was the director the MRI Section at Toledo Hospital and was the medical director of the PET-CT / MRI outpatient office.  He also worked exclusively the last fifteen years at the Promedica Breast Care Center, specializing in diagnosis of breast cancer.

In addition to four published books, Keith has also written several short stories and has won awards, among them the Hemingway Short Story Contest and The National Writer’s Club contest.

Since retiring, he and his wife, Cathy, now divide their time between Ohio, Cape Cod, and Florida. 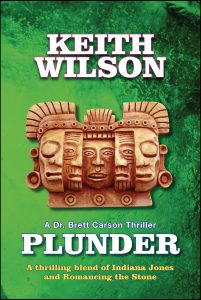