The three-story red brick townhouse I lived in as a ten-year-old foster child was an exceptional place for exploration. Rumored to have been built during the prohibition years of the 1920s, it was riddled with tunnels and passages leading to hidden reaches of the home. With nothing to do on weekends, I ventured into the basement to see what I could discover.

This left an impression on my imagination. I would make up stories as me, Amanda Blakely, a lost princess residing in the basement and yearning to be rescued by Prince Charming. He would whisk me away on his magnificent steed to live forever protected in a majestic castle.

Princess Amanda was the perfect projection of myself. In this idealized version, long blonde curls caressed my shoulders, my deep brown eyes evoked compassion, and my regal stature commanded respect.

Classmate Jaime Eisenhoff became Prince Charming. His jet-black hair and twinkling dark blue eyes beckoned to me from across Mrs. Garrison’s fifth-grade reading class. His warm smile made my heart flutter and return his gaze … my prince, my secret love.

On my first visit to the basement, I couldn’t tell you what attracted me to the huge landscape painting which hung on the far wall. It might have been the delicate green leaves on the maple trees. The details of the work revealed a three-dimensional effect. Their life-like detail never failed to fascinate me. A meandering blue-green stream appeared in the middle of the work which wound its course in an enticing manner. Gazing at it, I could almost hear the water flowing, its sound luring me deeper and deeper into the scene.

There were two smudges, which could have been children. Bright red dots had been placed where eyes should have been. These images puzzled me. Why would the artist be so precise to paint a creation realistic enough for me to touch, yet be so careless about indistinct human-like figures? Why were they in the center of the open grassy field? For whatever reason, the painting became an obsession.

On one occasion, after managing to tear myself away from staring into the landscape painting, I found a threadbare drapery. It had a cobweb at the end of the rod at the top as well as in between the fabric’s folds. Curious, despite cringing at touching the dirty curtain, I pushed it aside revealing a door. Surprised, I decided to open it to find out if there was another room.

I didn’t know what to expect when I gripped the doorknob. Was there something on the other side, or would I only find a wall? I gripped the knob expecting it to just turn and turn in my hand and not open at all.

What did happen next unnerved me. The knob turned by itself. I tried releasing my hold on it. Its spin gave me an odd ticklish feeling, which made me physically ill. I gulped down nausea while attempting to let go of the knob’s ghostly turn. I did, finally, and the door sprang open with a yawning creak. I passed through the portal and found a narrow passage.  After taking a few steps forward, the door slammed closed, leaving me in utter darkness.

I tried opening the door. The knob wouldn’t budge. Banging on the door, and screaming, I knew I was trapped. Shivering with fright, unable to leave the way I came, I turned to face a dark passage, knowing the only way out was straight ahead.

Out of nowhere, a small point of light pierced the darkness. I gathered up my nerve and walked towards it. As I did, the point of light resolved into another door.

After what seemed like an eternity, I stood before the portal. Grabbing the doorknob, it made me jump back. It writhed in my outstretched hand. The doorknob made a half turn to the right. The door opened, and I stepped through it.

Entering the room, the door closed shut behind me. Surprisingly, I found myself in the third-floor attic. How I arrived there without climbing a staircase, an incline, or riding an elevator puzzled me.

I entered the empty room and walked up to one of the large-paned windows stretching from floor to ceiling. The scene outside mimicked the painting in the basement, except it was real. Everything was there from the maple trees wafting in the gentle breeze, to the turquoise brook. Was this another dimension?

As I looked closer, there were two children. A boy and a girl appeared to be about my age playing tag. Their running speed was amazing. It was as if their feet hardly touched the ground. A couple of times I noticed red sparks flaming beneath their feet as they zipped around the backyard.

They sensed my being there watching them. They turned to look up at me with burning red eyes that glistened with evil. The same sparks I observed coming from their feet when they ran, flashed from those terrible eyes as they focused on me. Their heads were huge and grossly deformed, and their facial features were strewn askew as if some blind being cast them on their facial canvas. Each child had spindly arms with five long digits on each hand-like appendage ending in sharp claws.

Horrified, I stared at them with curious fascination. The girl opened her mouth into a wide gape. I heard a loud hiss inside my head. Placing both hands over my ears, I tried to shut out the terrible din. The girl pointed at me with her right claw-like hand.

Nausea gripped my stomach like a vise clamping down, threatening to squeeze the life out of me. I turned and ran, screaming a long bellow while racing out the door which had mysteriously opened. The high-pitched tittering echoing in my brain made me race back to the cellar, barely able to keep from stumbling through the passage.

When I returned to the safety of the basement, I caught my breath and brushed away the sweat from my brow. My breath came in deep heaves.

My stomach had settled down with only a dull ache. I looked up at the painting and saw both smudged figures were gone.

Did I imagine them?

I never discovered who, or what, those two children really were. I was afraid to mention my experience to my foster parents, or, for that matter, to confide in anyone.

The next time I had the nerve to venture into the basement, I wasn’t able to find the door. All that remained was a cemented wall behind the drapery.

Sometimes, at night, I would experience haunting dreams involving some inhuman creature’s dismembered arm. It would beckon me to wakefulness from peaceful slumber, reminding me of the painting’s three-dimensional attributes.

As for the two human-like creatures, they appeared in occasional nightmares which woke me in a feverish sweat. 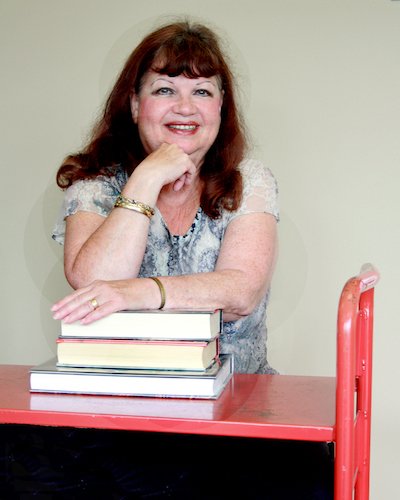 Beverly Ann Meyers is a Temple University graduate with a bachelor’s degree in Secondary Education teaching science and mathematics in Philadelphia. She worked with professors and graduate students in the Economics Department of the University of Pennsylvania.

For 30 years she has written novels and short stories.