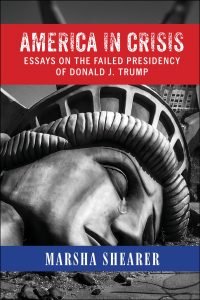 Putting the Trump presidency in perspective is made easier by reading this book. A series of essays presented in chronological order reflects the chaos of this administration. Although at times painful, and sometimes humorous, it is important that we not forget, nor allow to be normalized, this slide into a moral abyss. “America In Crisis” could not be more timely. I’ve purchased several copies to give to friends.
Pamela Vukelic

America in Crisis: Essays on the Failed Presidency of Donald J. Trump

Because truth matters and because we must not forget

“America in Crisis: Essays on the Failed Presidency of Donald J. Trump” was written in real time, over three years, beginning just prior to the 2016 election and ending as the House of Representatives considered Articles of Impeachment. The 90 essays capture the disastrous record of the Trump presidency; it also predicts his refusal to accept failure which led to violence resulting from Trump’s 2020 loss and his second impeachment.
“America in Crisis”  provides a history of events, too easily forgotten, that documents the worst presidency in our history.
John Adams said that “there was never a democracy yet that did not commit suicide.” This book documents just how close we came.
Amazon
Bookshop 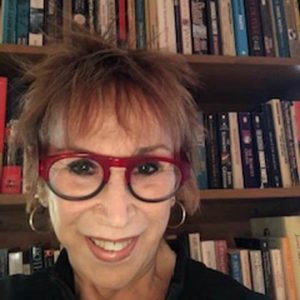 It’s terrific that I get to connect with the readers of “America in Crisis: Essays On The Failed Presidency of Donald J. Trump.” Depending on where you live, you may not have anyone with whom you can easily and quickly process information and reactions. That’s one of the reasons I started writing; it was a way for me to understand and document what was happening—especially because so much was happening so fast.

I live in a very conservative community that’s basically a company town…one of the few in the US. The developer owns the newspaper as well as the local TV and radio stations (FOX News is the default programming at local restaurants and other places of business). While conservatives and Trumpers have platforms to share their opinions, that wasn’t the case for others with a different viewpoint. But that began to change when I was given the opportunity to write opinion pieces for a local on-line paper. It become clear that there were many in our community with the same concerns, and those op eds provided a way to share and comment and support one another. These essays served as the initial core for the book.

As far as I know, this is the only book on Trump and his administration, written in real time over a three year period that provides a record of the worst and most consequential presidency in our history.

So a bit about me. I enjoy working out at the local gym – especially when I’m done. I play lousy golf, garden – all the usual stuff. I run a neighborhood book club – mostly fiction, and I’m also a member of a progressive reading group…we only read about politics and religion but just from a liberal viewpoint. That has been pure joy – especially in these times. I’m a news junky and I’ve always loved politics. I’m active in our local Democratic Club and spend hours each week phone banking, networking etc as we move headlong toward the 2020 election.

I’m direct, honest, I admit to swearing a lot – much more so in the past 4 years. Social media skills are meh. Facebook yes, Twitter, not so much.

So that’s a bit about me. Now it’s your turn. I’m especially interested in what you think about the book, about a special essay that you connected with – or not. It’s one thing to bitch and moan about what’s happening – we’ve all done a lot of that. But with the election just around the corner, I’d like to focus on what we can do to fix us – the process that led to Trump…and what we can do to bring us back together. I presented some thoughts in the final essays – would love to hear yours.