Herman Melville did it. So did Henry James. And Harriet Beecher Stowe, too. Story and book serialization was very popular during the late 1800s as magazines flourished and American literacy surged. Now Hallard Press is bringing it back on Fridays with their online Breakfast Serial.

In publishing, serialization means releasing individual parts or chapters of a book or story over a period of time. The technique has often been used in in the past in popular magazines. The continuing story was an effective technique to help sell subscriptions. In the digital age serialization helps build loyalty for websites and brands as users go back to the site regularly to follow the story. 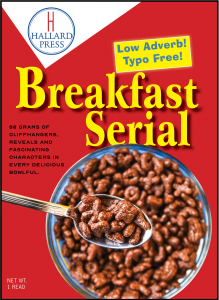 on the“We wanted to take advantage of the online technology to bring serialized fiction, essays, and articles from independent authors to as many readers as possible,” says Hallard Press Managing Director Nancy Hellekson. “We’ll serialize work from our own writers as well as top entries from our short story and other writing competitions. It’s a great opportunity to showcase good writers plus entertain readers.”Current plans are to publish each installment of between 1,500 and 3,000 words on Fridays, starting on Friday, November 13, 2020. “We believe that Friday the 13th is a lucky day,” Hellekson smiles. It might be a complete short story or one of a series of chapters from a book, she says. “Publishing on Friday gives subscribers time over the weekend to read.” The installments will also be archived on HallardPress.com.

One of the distinctive features of serialization is the ‘cliffhanger’ at the end of the episode. “Emily, securely roped to the railroad tracks by Black Bart, could clearly feel the vibrations of the oncoming train. To Be Continued.” The cliffhanger was designed to bring the reader back for the next installment to see if, or how, poor Emily was rescued.