“OH, NO! NOT AGAIN…not another animal story! ! Is he really going to take us on another safari?

Sorry, but guilty as charged.  That might not be a surprise if you’ve stumbled on anything I’ve written before. It just seems like I’ve got a one track mind. Spending as much time as possible with a camera aimed at wildlife…waiting….waiting…(ho hum) waiting…

If you’ve been watching the world news or following politics (I won’t discuss either, ugh) you just might understand why I have such an affinity for animals and the natural wonders of Africa. Besides, many people have either taken a safari or have it on their bucket list. And why not…?

When we watch the amazing National Geographic, BBC and Discovery videos of exotic wildlife you might get the impression you just go out in a Land Rover and there they are hanging around like groupies, to be put on the big screen. Well, surprise, surprise…don’t get your hopes up or be too confident. Regardless of where you may go on a safari, you never know what you’ll find on any given day. In fact, as large as an elephant may be at 5 or even 6 tons an entire herd may be difficult to find if they are on the move. In order to put together those videos it usually take many months of work trying to locate and follow a subject…like a leopard. 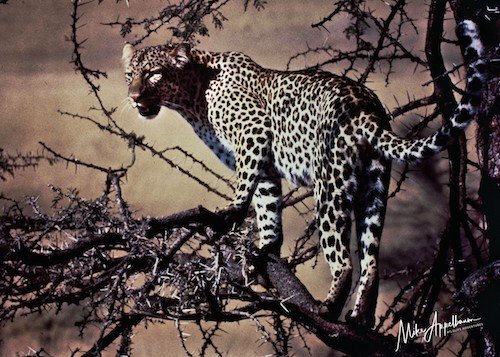 A solitary and secretive predator like the leopard may be right in front of you, but blend in to its surroundings so well that you might never even see it. Leopard are magnificent and quite beautiful! They are also extremely deadly. Not nearly as large as even a small lion, but lightning fast and extremely intelligent, they hunt by stalking and then ambushing their prey from a fairly close distance, usually at night or before dawn.

Of all the big cats the leopard is the least social. Leopard lead a solitary life so they hunt alone and must avoid having their kill stolen by lion or hyena. With amazing strength they will take down an impala or other prey weighing as much as the leopard and often much more, then carry it high up a tree to protect its meal and often eat at a later time. I remember one leopard that was so efficient that it had made five kills and stored each one in a different tree. Leopard are tenacious and have razor sharp claws that they use effectively and with precision. This helps them climb trees with mystical ease. They are truly lethal. 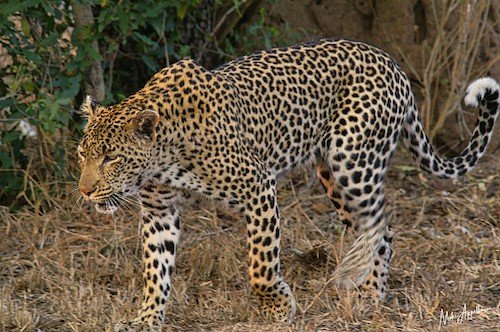 When on a photo safari today there are many images you can be fairly assured of seeing, but this is not one of them. Since the leopard is the most elusive member of Africa’s Big Five (elephant, lion, rhino, cape buffalo, leopard), visitors today are extremely fortunate if they even get a glimpse of a sleeping leopard. Most people on safari seldom get to see a leopard and if they do it’s usually half hidden sleeping in a tree.

Since leopard images in trees are truly classic, it is quite another story tracking one and following it on the ground as it cautiously attempts to locate and ambush its prey. Leopards are known for their incredible stealth and cunning, however, that is no secret to the birds, baboon, impala, kudu and other animals that call out warnings when our beautiful cat is out hunting. Life ain’t easy when everyone in the neighborhood uses the safari version of “social media” to announce your arrival.

So, now that you’re familiar with our amazing subject, how about coming along with me on that safari, exactly as it took place in Botswana’s Okavango Delta one August some years ago. First of all, you should picture yourself in your new khaki safari outfit….with all the cool pockets. You probably bought it at Banana Republic (ah, the memories) a few weeks before our departure to Johannesburg, South Africa. So, now we’re at the end of our first week and we are spending three nights at Duma Tau, one of my favorite tented camps in the Delta. We’ve been out on our game drive for several hours with our driver, Jonathan and tracker, Moses. Our Land Rover has three rows of seats, but since there are only four of us we have all the room we need. This is one heavy-duty vehicle that can go anywhere, including a snorkel for the engine in case we get into water that’s over 3-4ft. deep! (No snorkel for the passengers, though).

We have our cameras in hand and have already seen herds of impala, red lechwe (antelope), several greater kudu, giraffe and zebra. We know the pride of lion we saw earlier in the day would still be sleeping off a big meal (a cape buffalo killed last night) so we decide to focus our attention on a large male leopard that Moses saw in the area just a few days ago. Since leopard are territorial and Moses is a great tracker, we might get lucky.

Here’s where tracking skill and patience is critical. We spend the next hour driving, looking and listening. Moses has a seat located out on the bonnet(front hood) of the Land Rover so he can see the spoor (signs of game)more clearly. Signs of hyena are not good news, but somehow, amazingly, he spots a pug mark along the side of the trail we’re following. It’s a single print, but it’s smaller than a lion and there are no claw marks, since they remain fully sheathed (unlike the cheetah or hyena). Yup, it’s our leopard. Now we have to be even more cautious so we can get close enough to see him and not interrupt him if he’s hunting. It’s beginning to get a bit darker, as the sunset comes early during the African winter(May-August). We are all focused on movement, sounds and wherever Moses is looking. 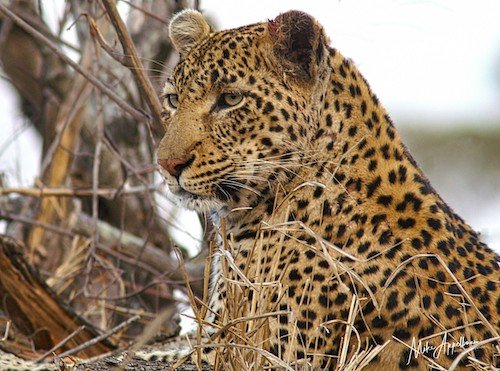 Success on safari comes from knowledge, patience and luck. Today we are blessed with all three. Within the next ½ hour Moses leads us to where the leopard is stalking several impala (it’s favorite prey) that are unaware of its presence. We hold our breath, eyes riveted to the leopard.  Quiet…quiet…slowly…silent now…moving closer the big cat waits for the right moment, lowering its body to the ground…then suddenly…BOOM! The impala takes off just as the big leopard suddenly explodes in a blur of motion. While we get a few images before it sprang, they disappear into deep brush that even the Land Rover couldn’t negotiate. While we don’t see it happen the sounds tell the story or rather, part of the story. The leopard is successful in getting it’s dinner…almost. We all know the phrases ”the rest of the story” or even “it ain’t over till it’s over,” so here goes… safari style.

Since it’s getting darker by the minute we return to camp having just experienced a fantastic game drive and actually seeing a stalking leopard. It was an amazing game drive. However, unknow to us at the time, one of the camp rangers was also in the same area and had a ringside seat for “the rest of the story.” What actually took place was extremely exciting, even if we didn’t get to see it.  While sitting with everyone at dinner we learned what happened after we left the scene.

After only a few minutes, two hyena heard the commotion of the kill and did what hyena do best…they arrived on the scene and ganged up on the leopard before it could get away with its meal and they claimed the impala. Being outnumbered, the leopard made the right move and avoided a conflict that could have been fatal. However, leopard are incredibly intelligent and extremely focused. Our leopard cautiously waited on the sidelines for the hyena to fight over the meal…waited…timed it perfectly….then rushed in to grab the impala and carry it right up a tree before the hyena could react. What a great move! The ranger was in the right place and was able to observe “the rest of the story”.

What can I say…all these years later I still think about that encounter and wish I had seen that leopard confront the two hyena. While it was really too dark to photograph, even now I picture in my mind the great photos I’d have taken (wishful thinking in such low light). Just one more example how regardless of how much we get to see and do, there is just so much more. So, once again Africa comes through with yet another adventure.

Oh well, it looks like there’s always a good reason for another safari. 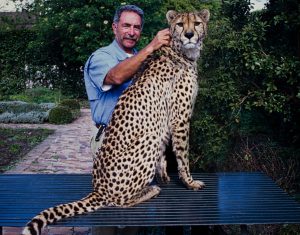 4 thoughts on “If The Spots Are Getting Closer…FREEZE!”