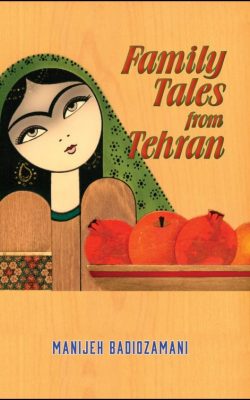 An excerpt from “Family Tales from Tehran” by Manijeh Badiozamani

When I was four, I had a brief and unsuccessful encounter with something my parents called “kindergarten.” I have no idea how long I attended—perhaps a week or two—and then they stopped sending me. I have only one memory from this period.

The private kindergarten was owned by a husband and wife team. The husband was known as Baba Noghli, “candy man.” At the end of each week, he would hand the kids a little bag of Noghl, candy-coated slivered almonds.

On the days I attended, Mother sent me prepared; she braided my long hair and attached a ribbon at the end of each braid. She fixed me a snack bag—I had no idea what was in it—and then I waited for a van to come and pick me up.

It was snack time at the kindergarten. The teachers read the names of each child written on the bags and handed out the snacks. They held up a bag and called a name: “Golbabai” (my last name).

Nobody raised a hand. She said it clearly and louder a second time: “Golbabai.” No response. A few kids started looking around to see if there was someone by that last name. So did I! Repeating after some other kids, I also asked, “Who is Golbabai?”

Whether I was too young for the experience, or too dumb to even know my own last name, or too shy, the end result was that I did not go back to kindergarten—or was it a pre-school?

A couple of years after the “kindergarten” episode, I was most eager to start first grade. Pourandokht Elementary School for girls was smack in the middle of the Big Bazaar in Tehran.

The Bazaar was the major business district in Tehran, and I had to walk several blocks—passing by the stores of the wholesale merchants, hearing the loud noise of street vendors, avoiding the pedestrian shoppers and donkeys loaded with cargo, and crossing a very busy traffic intersection. There was no other way to get to school, actually that was the shortcut.

Homa, my father’s cousin, was a sixth grader in that school when I began the first grade.

On my first day of school, at the age of six, I was entrusted to Homa to help me cross the busy intersection and guide me to school. I was instructed to come back with her when we were dismissed for lunch.

As recounted by my mother, around noon she saw me bounce into the house with loose braids, ribbons missing, rosy cheeks, uniform half-unbuttoned, laughing, and announcing,

“I came back all by myself.”

They must have been mortified! It wasn’t just the distance that worried them, but also crossing the busy traffic intersection and the crowds in that labyrinth of shops and wholesalers. To find one’s way through the Bazaar required knowledge of the place, and a six-year-old was not supposed to walk there alone. But I did!

If Homa was chastised for letting me out of her sight, I didn’t know. But it certainly gave me a sense of independence and accomplishment for the rest of the year, even though I was under strict orders to walk to and from school with Homa.

Bittersweet memories of the first grade weren’t just confined to walking under the watchful eyes of Homa, it had also something to do with my first-grade teacher.

Miss Motalebi was short, fat, and had a round face with a dark complexion. She was not married, and I had heard Aunt Tooran, who was also a teacher in another elementary school, refer to her as “that round radish.” I had no idea what that meant. But I loved school in general and adored Miss Motalebi, in particular.

With childish eagerness to please my teacher and to let her know that I liked her, I took some hard candies to school one day. Though we were not supposed to enter the classroom until the bell rang, I walked in and arranged the candies neatly on her desk.

I was beaming with happiness and my heart was beating with excitement. I could hardly wait for her to discover the candies and thank the person who had put them on her desk.

We sat in our designated seats, and Miss Motalebi walked in and sat in her chair behind her wooden desk. Suddenly she spotted the candies. With a disgusted tone of voice which expressed her intense loathing, and with anger in her eyes, she yelled,

“Who the hell put these on my desk?”

Without hesitation, still wanting to be acknowledged for something nice I had done for my teacher, I raised my hand. She then quickly added,

“Come right away and remove these candies and don’t you ever do that again!”

Something tiny inside me died at that moment. I was embarrassed and heartbroken. I got up and walked to her desk, picked up the candies, and stuffed them into my uniform pocket.

Manijeh Badiozamani grew up in Tehran during the 1940s and 1950s, before moving to the U.S. as a teenager. She takes us to her childhood home—her grandfather’s house—near the Big Bazaar in Tehran, the teeming capital of Iran. Growing up between the traditional and the modern, she recreates the Tehran of her childhood as well as the modern during her many trips back to Iran. We meet her quirky family and friends and discover the impact they had on her life. The stories are laced with humor and, sometimes, sadness. After 40 years, when she returns to Tehran to care for her aging mother, the spotlight is on the cultural differences and the universal problems of aging. Her stories reflect an Iran of another time and culture.

To read a recent article on Manijeh, click HERE.