It was December 23, 2009. Our adult children were home for Christmas. It was day two of five. The three sons-in-law played the board game, War in one room. Our daughters were on electronic devices—shopping.

Our granddaughter was now sprawled on the floor in the open-concept living room-kitchen in front of the television, which blared full blast on the Discovery Channel. I couldn’t look at the screen. Somewhere a zebra was being taken down by an enormous cat. I would have preferred the Disney Channel, but Discovery was the parent-approved choice.

Dishes spilled over in the sink, and well, everywhere. And even though we had a sprawling ranch home with electrical outlets in the four bedrooms, dining room, game room, tv room, office, and exercise room, five phone chargers dangled from outlets amongst the dirty plates.

I rode the familiar, yet strange roller coaster ride somewhere between pure contentment mixed with the need to flee. I laughed, I almost cried. I couldn’t wait for bed. Why can’t this last forever? When am I going to see them again? Women—we’re barely hanging on most of the time.

It was an hour until pop-the-cork time, and I had no desire to deal with the dishes, even though I love a clean kitchen. Then I remembered the groceries in the car purchased to fill Christmas baskets for the needy. Yes, I needed to run an errand. Elves would unload and load the dishwasher while I’m gone. I grabbed my jacket, scarf, keys, and purse. I glanced at Papa, asleep in his office.

A little face appeared in the hallway. Her toddler body waddled up onto my feet. She stared up at me and said, “Hazel goes with Grandma?” She was manipulating me with baby talk.

I knelt and hugged her. She wrapped her arms around my neck in a near death grip, which knocked me onto my butt on the floor. As I unentwined myself and released her, her beautiful eyes searched mine, as only a grandchild’s can. Somehow, they can scan your eyes, search your soul, and summon ancestors. Love—generations of love, communicated in those eyes.

“I would love for you to go! Let’s make sure it’s okay with your mom.”

Hazel didn’t wait. She struggled into her snow boots. I peeked into the exercise room where mom perched on the elliptical with her computer propped on the bar of the grey beast of a machine.

I interrupted. “I’ve got an errand to run. Can Hazel go along?”

I peered into the hallway, looking at the toddler, who adeptly buttoned her coat. “She’s already got her coat on. She looks a bit like the Paddington Bear.”

Mom nodded her blessing and the two of us were off on our adventure. My three-year-old had no trouble with the car door or her car seat strap. “Hazel do it.”

It was cloudy and dusky at four o’clock in the afternoon. Mother Nature had blessed us with just enough snow for the magic to creep over the land, but left the streets clear. As I pulled out of the circular drive, the pine trees in the front yard, the ones I always wanted to decorate but never had the time, glistened with icicles.

We sang across our small town, starting with Jingle Bells. Many of her preschool songs I didn’t know. But I enjoyed the inclusiveness of the songs. As we pulled up to the church, the speakers played “Silent Night.” A brief memory of my son singing an a cappella solo on Christmas-eve too many years ago played. In the corner of my eyes, tears formed. I savored the memory for a moment before I popped the trunk and Hazel popped out of her car seat.

As we were grabbing the box and a bag of food, a man dressed in brown coveralls and wearing an orange stocking hat approached. His hat, which stood about a foot above his head then drooped like a crazy Dr. Seuss character jiggled while he walked. He pulled a large pine tree behind him, his gumboots jingled.

I knew it was Tully, the self-appointed maintenance-handyman of the church. Tully’s eyes always twinkled because his only mission in life was to help others and make people happy. I waved to him, and he dropped the tree and came over, then knelt before Hazel as he introduced himself. Candy canes lined the bibs of his overalls, and he pulled one out and gave it to her. He grinned and twinkled and handed a cane up to me.

He praised Hazel. “What a good helper you are! Did you know your grandma is one of our absolute best elves? She always comes through when we are in need.”

We carried the groceries into the quiet church. Hazel lugged the canvas bag. Candles were dancing for Christmas and the rows of poinsettias in red and gold accented the altar.

Hazel’s eyes sparkled as we struck the match to light the peace candle.

When we tip-toed out of the church, I caught sight of Tully’s orange hat, which seemed to elongate and disappear into a wall. I couldn’t help but wonder where he’d gone.

Hazel tugged on my coat. “Where’d he go?”

Not wanting the adventure to end, I extended our errand, and headed for the deli. The way we were going through food at the house, deli trays would be an excellent addition to the menus.

When we came through the shop’s door, the bell on the door jingled. The owner had changed the regular cow bell to sleigh bells. Vintage snowflakes and Christmas bulbs hung from the ceiling. Twinkling lights blinked on the window. Fake snow decorated the meat case.

Hazel let go of my hand and charged up to the meat counter and announced, “I’d like four hot dogs! And—MY GRANDMA’S AN ELF!”

Sam, in his Santa hat laughed. “I can see she’s definitely one of us.”

He pointed around the room. As if they had staged the performance, his two helpers appeared from the meat freezer, wearing elf hats with big plastic ears. They nodded in silent, conspiratorial agreement.

I laughed and knelt beside Hazel to choose our deli meats. We also bought old-fashioned ribbon candy and a wide assortment of chocolate.

Hazel was quiet on the way home, talking to her stuffed monkey about Santa. My heart was full of the beautiful evening that now smelled a bit like sugar cookies.

I barely placed the car in park when Hazel again popped out of her car seat and labored with her boots up the steps. I followed close behind. She burst through the front door shouting to the now wine-sampling women. “MY GRANDMA’S AN ELF!”

Papa’s eyes twinkled as he peeked around the corner. “I didn’t think we were going to tell her until next year.” 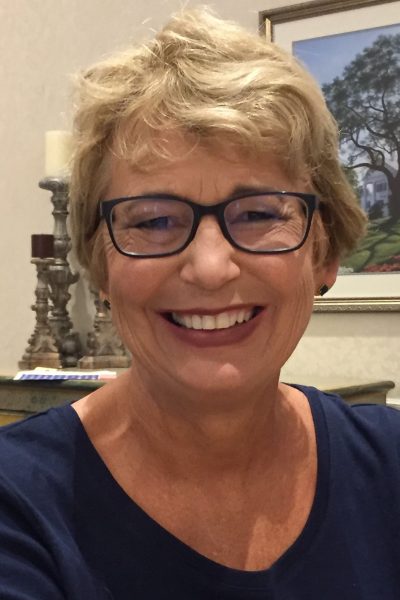 J.J. Clarke is the author of the Kate Anderson Mystery Series. Her books include Dared to Run, Dared to Fly, Dared to Return, and Dared to Dream, and are all available on Amazon.

She is also a member of Pen, Paper, and Pals, a writing group in The Villages.
Learn more at http://www.bit.ly/penpaperandpals