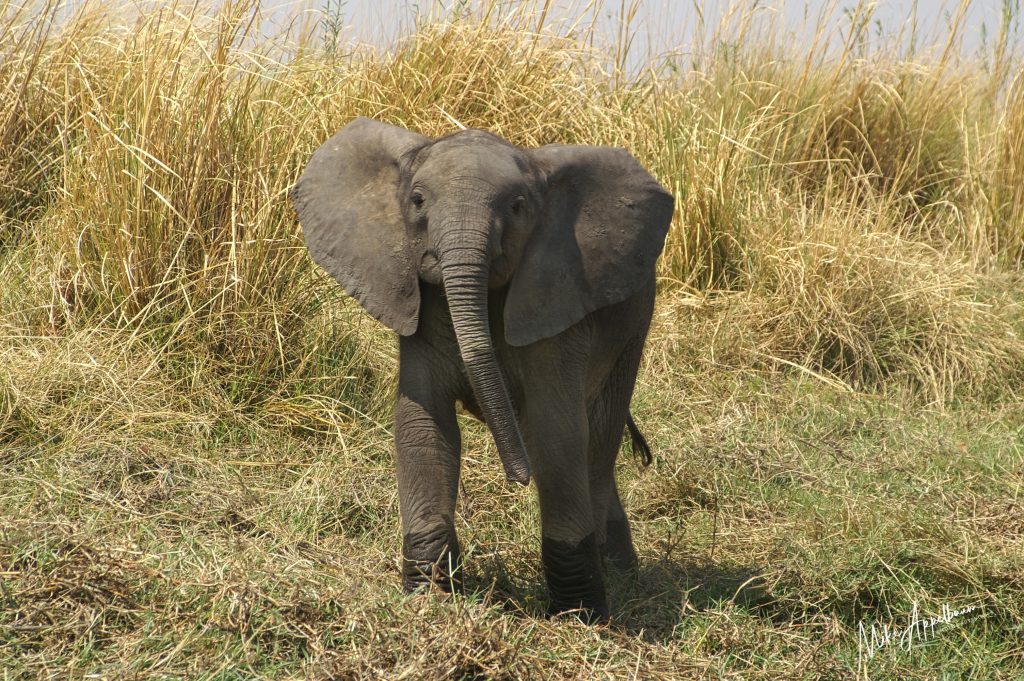 Hmm…OK, your not buying into that one huh? Where did I go wrong? Maybe he doesn’t look ferocious enough…or could it be his mini-elephant size? Possibly the Dumbo gave it away. The reality of course is none of the above is quite that dramatic. Especially the “fearless” part, but it was a cheap trick to see my name in print with the three words “fearless safari guide”. However, this actually did happen….kinda…and was part of yet another wonderful day on safari. Let me take you back with me. 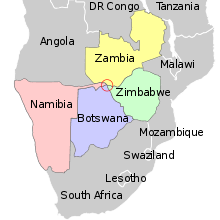 We’ve been staying in a unique little safari camp, Muchenje, located just off the Chobe River in Botswana. It’s an interesting location because it’s sitting at the only place in the world where 4 countries meet. Botswana, Zambia, Zimbabwe and Namibia form the world’s only ‘quadrapoint’. (Sorry about throwing that geography stuff in all the time, I forget I’m probably the only one finding it interesting.)

So….we’ve been out on the river in a very, very small boat. Actually, it’s a six chair skiff with just a 50hp. Mariner outboard. If this sounds less than luxurious, worry not. The size of this little boat allows us to go anyplace we want with no fear of getting stuck in shallow water and it has enough umph to avoid those pesky hippos. With its flat bottom we can even get right up on land if we want to and that’s an important element in our adventure.

Since this area has the largest concentrations of elephant in all of Africa we are never surprised to see them along the river. Usually, in large herds. By now we’ve been on the water for a few hours and already had many good sightings of sable antelope, zebra and greater kudu on land and hippos, Nile crocodile and elephant in the river. As a bit of a treat I wanted my group to enjoy a brief stop that wasn’t scheduled. We would stretch our legs and step out on land in Namibia, the country conveniently located on the opposite bank, but not on our itinerary. Since no one had their passport with them, and we would be doing this ‘on the sly,’ we had to find a spot that would have the following requirements: no customs agents, no lion prides, no crocs sunning themselves, no hippos sitting in the shallows…oh hell, you get the idea. A quiet, safe and basically easy location to run the boat onto six feet of sand.

Easily stated, but not so easy to find. There were no custom agents of course (we’re in the bush not an airport), however, a spot to beach the boat void of the other four-legged critters was a bit more difficult. But wait…just ahead of us is a great spot just about a hundred yards away. As we slowly move toward our large grassy destination we carefully watch for any movement or wildlife. Excellent. Looking good. James, our local guide and boat captain almost has the bow completely on land when literally, out of nowhere, comes Namibia’s newest featherweight champion. Little Dumbo….

First, he took a long hard look at this floating “taxi” full of people and then he started to trumpet. He obviously learned his lessons well. It’s always exciting to see a young animal act the way it is supposed to at such an early age, but our Dumbo was obviously an accelerated student. For about 20 seconds he stood still and gave us an icy stare and then with one huge (actually, baby sized) bellow….SUDDENLY ATTACKED!  (Fear not and please excuse my snicker)

He next ran straight at us closing most of the 50 foot distance to the boat in record time for a little guy. He must have watched his mom act like this hundreds of times because he stopped dead in his tracks about 15 feet from the boat and shook his head and stomped his feet and trumpeted like he was protecting some invisible herd that he imagined was behind him. Now he’s firmly standing his ground as we all watch in total amazement (I mean amusement). He wasn’t about to let this group of boaters come into his territory unchallenged. He put on a wonderful display. 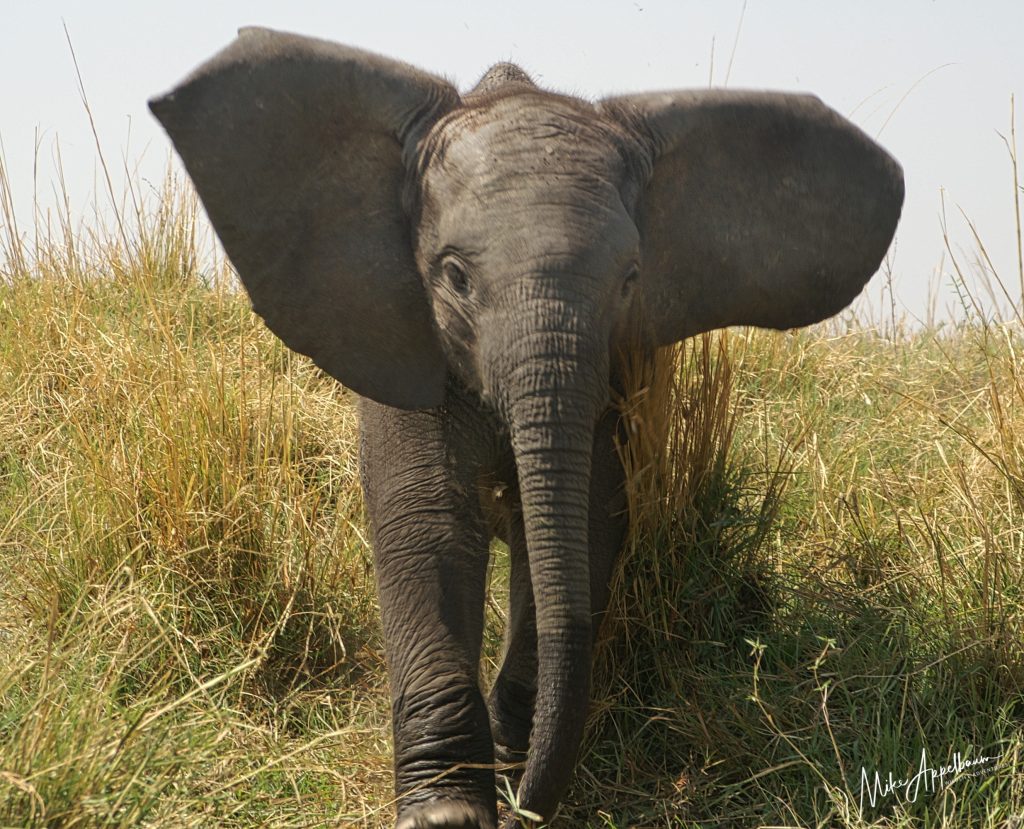 Here we are…the boat landed and we are suddenly confronted with this mini-hero defiantly protecting his territory. We are truly caught by surprise since he is completely alone and just seemed to appear out of nowhere. It was fantastic, but he wasn’t finished just yet. He was obviously doing exactly what he had seen his mother and sisters doing every time they were ever in a confrontation. They were being elephants…and at only about 2 ½ to 3 years old our little guy has learned well…even if he couldn’t quite back it up yet. Like I said, he wasn’t quite finished. Brave as he could be he made his final move…he actually came right up to the boat and physically HIT THE BOW with his right front leg (the Dumbo photo). For a moment we thought he was going to be our 7th passenger, but that was about the extent of his bravado. He trumpeted one last time then took off running once he realized what he’d just done. We were amazed, enchanted and delighted. It was wonderful! My only concern was why he was so far from his mom and the rest of the herd, but having that thought and realizing they could be nearby we prudently pushed back into the river and ultimately found a different spot for our break. While it was a fantastic and memorable little episode for us, I really wish I could have been there with that little guy’s mom to hear the story HE WAS GOING TO TELL HER! 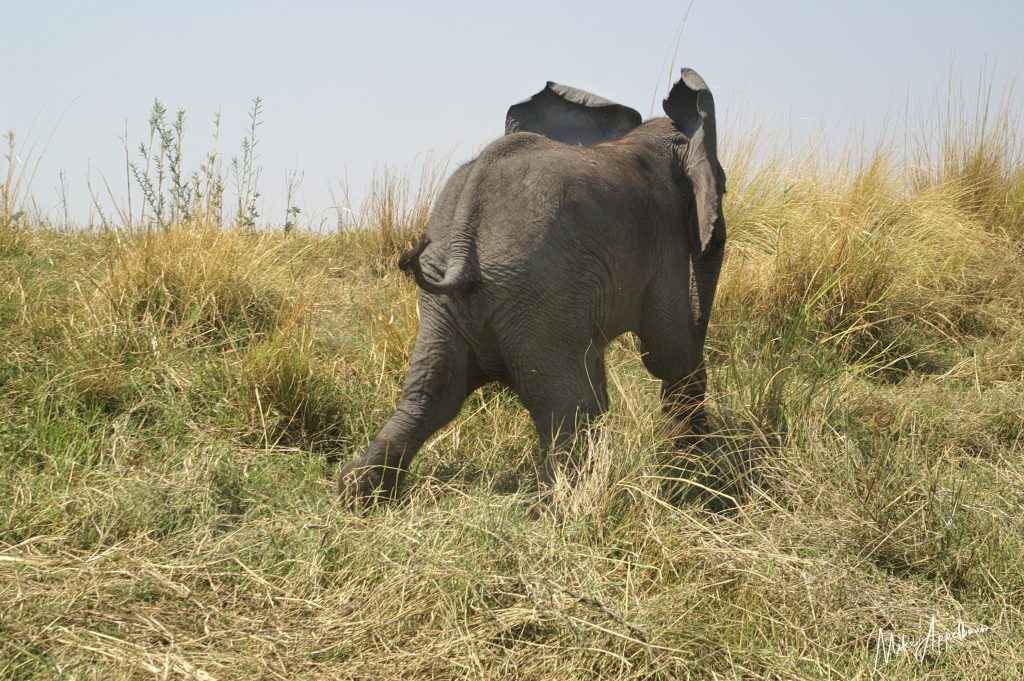 17 thoughts on “Don’t Mess With Dumbo”