In 1999 Dr. Renée Richards kept a detailed diary of her personal and professional life. An internationally renowned eye surgeon and teacher, her specialty was strabismus, a condition where the eyes do not properly align.

It was an eventful year. Medical practice was changing to managed care and she adapted. The hospital she had helped build was for sale and she tried to save it. Strabismus was still a vast and mysterious condition, so she worked harder at solving it.

We saw several patients in the city. India Weston, two years old, had surgery done elsewhere for exotropia. She’s in pretty good shape, although her parents felt they needed reassurance the child was doing okay. Frequently, that’s the case with the second opinions—the treatment of the doctor taking care of the patient was not inappropriate, but the communication was.

And then I saw Anita and Jack Reiner, my best friend, Leslie Pollack’s son-in-law’s parents. I’ve known them for many, many years anyway. They just needed ordinary examinations, but of course, it takes a long time to examine friends.

And then we saw Erin Creamer, the daughter of Marcia Creamer. Erin is 54 years old with severe diabetes. She doesn’tsee very well, but the organic basis for her poor vision is unclear. Yes, she does have diabetes and, yes, she does have a fewtiny microaneurysms in her retina, but not near the important part, the fovea, and yes, she has some optic atrophy, onwhat basis I don’t know.

She’s a problem because she comes in seeing only 20/200 with minimal diabetic changes and optic nerves that look pretty good. And yet I could coax her into reading the 20/40 line. So, you know something is going on in addition to the optic neuropathy and the diabetic retinopathy, which are both very, very subtle.

I also saw Anthony Risotto, who’s now 15 years old. I operated on him when he was younger, and he’s now writing a mass. He’s a brilliant composer. He gave me a tape of one of his compositions a few years ago when he wasn’t even 11 years old, and it was beautiful music.

Donald Coster has a significant blood-borne disease, and I didn’t want to operate on him at first. Eventually, I did operate on him, and he got a perfect result. He told me that, when he’s lying upside-down on the couch trying to watch television, he might see double.

“Don’t lie upside down on the couch watching television,” I advised him.

It’s annoying when you have such perfect results and a patient says, “Well, when I’m in a crazy position and I look out of the corner of my eye, I can see two images.”

And I saw Chloe Friedman at the request of my good friend, Steve Levy. Chloe is three years old, and she has significant astigmatism and wouldn’t wear the glasses prescribed for her on Long Island. The glasses were correct. The question again was communication and just how severely she needed to wear her astigmatic correction.

“Don’t make a federal case out of it and just get her to play with the glasses,” I told her parents, “because she sees quite well without them anyway, and I don’t think she’s going to become a bilateral amblyope if her astigmatism isn’t corrected.”

That’s always the issue. You’re afraid that, if you don’t correct the astigmatism, the child doesn’t have a clear image on the retina and will become amblyopic, but not in this particular case.

Then I saw Chin-Sun Lee, a little Korean girl on whom I operated at the age of three. She’s got nystagmus, overwhelming astigmatism, esotropia, and bilateral inferior oblique dysfunction. However, she had a very good result from surgery. She sees fairly well in spite of her nystagmus. Her father brought her in because he had taken her to the doctor around the corner from where they live in New Jersey.

“I have no confidence in that doctor,” he said.

“Mr. Lee, you shouldn’t have taken her there in the first place,” I said. “She’s a very complicated case. You can take your son there. He’s got simple nearsightedness, but you can’t expect a general ophthalmologist to deal with the problems of Chin-Sun Lee. You have to understand that. If you have to take a half day off to come into the city for her visit, well, then you must do that.”

I think he got the message.

A fax from Dr. Steve Fochios upset me. He’s the president of our medical board at Manhattan, and he’s been working day and night to try to help our lawyers appeal to the attorney general to keep the hospital open and to make the lay board sell the hospital to another hospital that will keep it as an eye hospital rather than to Memorial. At our surgeon directors meeting July 12, we were all asked to get our colleagues to contribute more money.

Now, Steve sends a fax to the entire staff of the hospital listing who has contributed to the lawyers, how much they’ve contributed, and who has not contributed at all. I think it was just a terrible thing to do. I’m very upset about it because he has no business making that public information, even if it’s just meant for the other surgeon directors. I’m not going to call anybody and ask them to give more money. We’ve given the lawyers $300,000, and now they want us to raise another $150,000 or they won’t continue work. I think it is just awful.

We saw 15 patients—all children—at Northeast Eye Care up in Putnam, and it went very well. No significant problems, which makes it easy. No adults of the age of 80 with five pairs of glasses and macular degeneration and cataracts and double vision and prisms and all the rest of it. Just nice, simple children’s ophthalmology.

One patient was Melody Masterson, who lost her father and her two siblings in an automobile accident, and she was injured severely, with neurological damage. But she’s doing very well. I operated on her after the accident. Her eyes are straight. She doesn’t have much fusion—I think she lost that from the head injury—but she walks, she talks, she’s in full active life again. She just has to do it without her father and her two sisters.

The rest of the schedule was routine. As usual, I walked out on the dot at 12:30 pm.

The weekend was not too hectic this time. We did go to dinner at Geoffrey and Joan Bell’s house across the lake, which was nice because their house is air conditioned, besides the fact they’re good friends and we enjoy their company.

Geoffrey is British, and a famous economist. One time when we were golfing, he could only play nine holes. He abruptly packed up his car. “Renée, gotta go, having lunch with Tony Blair in the city.”

And on Sunday night, we went to dinner with Leslie, my best friend, and his wife, Yvonne, up in Pawling in a very nice restaurant.

Monday afternoon I’ll be back in the city seeing patients. I have two gigantic trees in my car that I bought to bring to Grandpa’s house to put in his driveway. For some crazy reason, Arleen had him chop down the trees in his driveway. She said they were dead, but they weren’t. I’m going to take enough trees out to Forest Hills so I don’t have to look at the fence and the neighbor’s brick wall when I walk out of the house. Those trees had been there for 25 years and they were beautiful—and they weren’t dead. 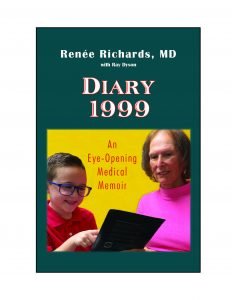 “I remember my first day at Yale, Indian summer glory of New England. My father helped me haul my stuff up to the fourth-floor suite in Vanderbilt Hall that was to be my freshman home. When we said goodbye, I asked him how I was to get from my dorm to the tennis courts every day. He replied, without a pause, “You take the trolley, same way I did.” When he was my age, in 1917, there was a trolley. The tracks were torn up long before the class of ’55 arrived in New Haven. There have been many changes since his time and ours, some of them seemingly impossible, now part of our ordinary life.”

Dr. Richard’s life has included tennis as a player and coach on the world’s preeminent courts, transition from male to female, international renown as an eye surgeon and teacher, writer, and speaker.