Writing is like coloring. You create a picture and color it in so that the reader can see their version of what you see. Sometimes you want to stay inside the lines and color in one direction. Other times you can get really messy, go way outside the lines, and mix purple with yellow.
Other times you just ‘want the facts, ma’am.’ Terse, clipped, and short. Black and white outline only.

The Facts Only Version: West and East Berlin: A comparison. 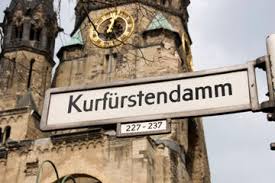 One Saturday, in 1961, three of us, Janice, Margaret and I, walked into East Berlin from the West. It was grey, depressing, and in ruins compared to the other side of the City. We saw sidewalk showcases like the ones on the Kurfürstendamm. In the West they displayed furs, gems, and luxury items. Here the cases were empty or broken. Except for one that had three glass jars with photos, cut from a magazine, lining the inside: pears, strawberries, and plums. The city and its people were so poor and damaged that they could not even put real fruit in the jars.

The Colorized Version: A Walk into Dystopia

Crossing the border into East Berlin from the West was always fraught with anxiety. Scowling teenagers in wrinkled military uniforms carelessly cradling automatic rifles. The hand thrust out, “Passport!” and then your precious document disappears into a building, emerging some time later in the hands of another scowling officer who hands them back curtly without comment, waving you on, never making eye contact.

The War in Europe ended in 1945, sixteen years ago, for us. We were barely 20 years old. For many East Berliners, the War would never be over. The Wall was part of their everyday. Their buildings were grey and overgrown, dilapidated with bullet holes and roofs missing. Grey, featureless apartments rose at corners. Even the blue summer sky was grey. If you looked up “depressing” you’d see a photo of East Berlin.

The three of us—Janice, Margaret, and I—walked casually along the streets. That set us apart. No one on this side “strolled,” especially no one our age. Strolling meant you weren’t going anywhere with purpose and that might catch the attention of someone who knew someone in the feared and hated Stasi who might note it on your record. Get enough notes and you might get a visit.

A shabbily dressed young man, walking with purpose, passed us on the left, measuring his pace to ours for a short minute.

“American?” he asked quietly, looking straight ahead, pretending not to notice us.

“Yes,” we answered, as if no one was there We knew the routine.

“Is it true that in America everyone has two televisions?”

“Some people do,” was the answer.

His pace picked up and he moved on, bent over with purpose, hands shoved deep in the pockets of his grey pants. Who knows? Maybe he was Stasi checking us out. 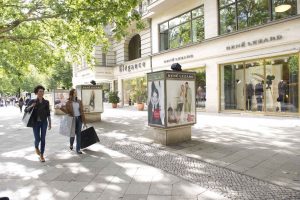 We turned a corner and the street opened into a wide boulevard. Large glass showcases, like the shiny ones along the Kurfurstendamm in the West, dotted the wide sidewalk. But unlike in the West—where the cases displayed any number of luxury items: furs, jewelry, and electronics—these cases were cracked, broken and empty. Except for one.

Looking forlorn and insignificant in the middle of the case were three glass preserving jars. Someone had clipped color images of fruits—pears, strawberries and plums—from a magazine and now they stood, faded and tired, lining the inside of the upright glass. We stopped in silence and stared at the sad arrangement. In the West, there were fur coats on display. Of course, it was propaganda, but at least they were trying.

Here they couldn’t even muster the necessary to put real fruit in the jars.

We didn’t know the word “dystopian” then, so we said nothing. Eventually, it was Margaret I think, who just said, “Grey.” We all nodded in agreement.

See images of showcases on the Kurfürstendamm here https://www.youtube.com/watch?v=bqiw20qxnYA