The soldier’s hollow eyes scanned the farmyard in the dusk. A broken chimney bowed over the smoking ruins like a mourner. Before the artillery shelling a tidy white farmhouse had graced the countryside. Now there lay only rubble and charred timbers.

“Heck of a Christmas Eve. Not even sure if I’m in Belgium, France, or Luxembourg,” the soldier mumbled. “Can’t very well send Christmas cards if I don’t know the return address. Maybe I’m on the corner.”

A splintered pony cart caught his eye. One of the shells had exploded nearby and overturned it. He stared at it a moment and muttered, “Somehow I’d have imagined it more scenic.”

On the path from the house to the barn lay a hound, its chest blown open, innards spilling out.

A dead chicken lay nearby.

“Just another casualty,” the soldier said, picking up the dead chicken by its feet and holding it at arm’s length, “in a long list of casualties. Some Christmas, all right. Not even a Christmas goose this year.” He tossed the chicken carcass aside.

Something moved. Barn door. He dropped to the ground, finger on trigger, and waited for an enemy soldier to step out. He held his breath, his heart pounding fast and hard in his ears.

A kitten. A white kitten. As it pushed past the door, the hollow-eyed soldier felt his muscles relax and his breath rush out.

“No,” he whispered, tensing again. “Could still be someone inside.” His finger tightened on the trigger again as he thought what to do.

It was dusk. He had been separated from his outfit. It was Christmas Eve in a war zone, he was bone-tired, and he wasn’t even sure what country he was in. He needed a place to sleep, and it was either the barn or the woods. But he wasn’t sure the barn was empty.

When nothing moved for five minutes, he changed his position, working around to the back of the barn. Didn’t trust the front. Too risky. Behind the barn he discovered a fenced stock pen with a low door leading inside. He entered cautiously, rifle barrel first.

The barn was dark, empty. The animals had either escaped, been eaten or—like the hound and the chicken—been killed in the shelling. The stalls were empty except for the loose straw scattered for bedding. No hay. The Allied advance had turned the hay fields into battlefields.

The soldier looked into the rafters. Two identical lofts, one on each end of the barn.

“Heck of a Christmas Eve,” he repeated under his breath, then climbed the ladder to one of the lofts. Once up, he moved to a corner and pulled off his pack.

“Where’s Santa with my presents tonight?” he said sarcastically. “I guess he and God stay clear of the combat zone.”

He sat dazed a moment, stunned by the possibility of what he had uttered. This war and what he had seen and experienced had presented him with his times of most faith and least faith. Finally he took off his helmet, set it aside, and began pulling things from his pack.

A can of beans. Powdered milk. Two chocolate bars. The beautiful knitted shawl he had bought in a French village, hoping to send it home to his mother in Maine. In truth, though, he didn’t want to send it; he preferred to hold onto it, praying that he might get home alive to place it around her neck himself.

He opened the beans and ate them along with one of the chocolate bars, then lay on the loose straw and fell asleep.

A noise woke him and his eyes flew open. Cautiously, silently, he sat up, rifle ready. No idea how long he’d slept. Not sure if it was night or day. A dim light. Was it dawn? After a moment his eyes adjusted and he saw that it was lantern light. He inched to the edge of the loft to peer down.

A young woman, hardly more than a child herself, sat on a bed of straw, nursing a baby. The child cooed as it sucked, and the mother sang a lullaby. No father or traveling companion in sight.

After a while the young mother lay back on the straw and lifted the child above her head.

The baby gurgled and giggled each time she lowered it to her face and kissed its belly. Once she held it overhead and it drooled on her, but she simply laughed and kept on. She sat up and kissed its bottom, then laid the baby across her lap and stroked its back and hair. The child flailed its arms and legs without crying, but didn’t fall asleep.

When the baby tried to turn over and look up, the young mother stood, placing one hand behind the baby’s head and another under its bottom. Then the two of them began to dance, swirling and dipping around the dirt floor together. The mother’s long skirt kicked up tiny straw and dust whirlwinds, and the white kitten swiped at her with its paw.

The breathless young mother slowed to a waltz, and within minutes the baby fell asleep. She walked to one of the horse stalls, spread a white linen napkin on the straw, and laid the sleeping baby on it. Then she covered it with a second linen napkin, bowed her head, and silently prayed.

Another movement. From the other loft.

The soldier’s hollow eyes searched the darkness there and met another pair of hollow eyes. The enemy. Each had been intent on the mother and child. Now they were intent on each other. For a long time neither moved, neither raised a weapon. Then, as if by design, both looked down again on the mother bowed over her sleeping child.

The enemy moved first, and the hollow-eyed soldier watched as his counterpart cautiously slung the rifle over his shoulder and began the climb down from the loft.

The sound of boots on the ladder startled the mother, and she looked up, afraid. But when the soldier smiled and nodded respectfully, she relaxed and acknowledged his nod. He knelt near her, reached a hand into his pack, and drew out a carved wooden box. When he lifted its lid, a waltz began.

The mother smiled as he held out the music box to her. Not a word spoken, and after a long moment the enemy soldier stood, slipped on his pack again, and disappeared into the night.

In the loft the hollow-eyed soldier waited to see if his enemy would return. When nothing happened after ten minutes, he swung his feet onto the ladder and climbed down quietly while the young mother watched. As his boots touched the floor he turned and faced her, unsure what to do next. His tentativeness gave way and he slipped off his pack to kneel where his enemy had knelt. One hand held the pack and the other slid inside it, drawing out the powdered milk and the remaining candy bar. He placed them beside his enemy’s music box.

The mother nodded, smiled, and the soldier rose to leave. But at the door he stopped. He looked back to the light, seemed uncertain for a moment, then retraced his steps and knelt once more where his enemy had knelt.

The music box had run down, the waltz had stopped. He picked it up, turned it over in his calloused hands. Solid yet delicate, the work of a master, he could see. The music box was indeed a fine gift. He wound it, opened the lid, and the waltz began anew.

The mother smiled, and when she saw the hollow-eyed soldier looking down toward her sleeping infant, she drew back the linen napkin to reveal its peaceful face. Tears streamed down the soldier’s cheeks.

The young mother bowed her head, eyes closing softly. As she did, he closed his eyes and bowed his head. It was only a moment, a long moment in the midst of a long war, but when she looked up, the hollow-eyed soldier was gone. And where he had knelt sat the music box playing its waltz. Draped across its open lid lay a beautiful knitted shawl. 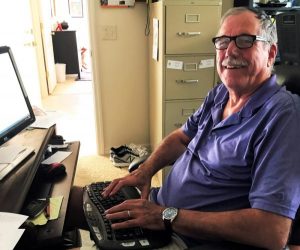