I’m a terrible mother; MacDonald’s for dinner; putting Zumba before my children. If they tell Grandma, I’m screwed. Sarah Merriweather, the mom, age forty, angled the new Mercedes SUV out of MacDonald’s drive-through to the waiting area. Avery, fourteen, sat in front. Ariel, eight, behind her. Five-year-old Mathew, nicknamed Matt, sat behind mom in a booster seat wearing his school backpack. A rubber Carnotauras dinosaur in his right hand fought an angry T-Rex in his left. His growls and screeches drove his mother bonkers. The monsters slashed claws and teeth at each other and at Ariel.

“Mom! Matt scratched my arm with his dino.”

“Mathew James, for Christ’s sake, knock it off. Give me the damn Carno,” she snapped, regretting the two swears. Her hand slid palm up between the seats. Matt pleaded; it was an accident. Mom snapped her hand closed and then open. He gave it up. Carno went for a time-out in the glove box. He’s driving me fricking crazy. What’s the deal with him and dead lizards?

A geezer wearing a freaky Ronald MacDonald costume ambled out with three bags. Ariel took them through the back window to the space between her and Matt.

“No eating in the new car, kids. That means you, Mathew.”

Mom pulled out for the ten-minute drive home through historic Litchfield. Matt grabbed the nearest bag to look for toys. The fries on top proved irresistible. Doing her math homework, Ariel sorted fruit on her tablet into baskets. Matt bit open the corner of a ketchup package, squeezed some on fries in the bag, and sat the package on the booster seat. It fell off, landed on the perforated camel-colored leather seat, and oozed out.

Mom at first thought it was blood, the red blotch on the seat. She adjusted the mirror, saw the ketchup packet. She moved the mirror left to see Matt popping red-tipped fries into his mouth. She came unglued. Her tirade of swears and worse sounded more like ghetto rap at Super Bowl halftime than a white pilgrim Yankee. Startled, Matt spat a mouthful of chewed fries into the bag and waited.

The Mercedes jerked, like Jeff Gordon making a pit stop, into the parking spot by Tiny Tot Fashions in quaint downtown Litchfield.

“Matt, I’ll wait in my seat until you get out, so I don’t slap you in front of security cameras. There’s a trash receptacle over there on the corner. Since you spit in the damn bag, throw all of it away. Oh, and give me your T-Rex. Oh, and that was your dinner.”

Avery never looked up, engrossed in TikTok boy-band videos. Most of the ketchup came off, except in the holes. I’ll use a toothpick to push the goop down; Hubby will never know.

Matt moseyed down the sidewalk, saw a lady with a plastic toy shovel by the fancy trash bin.

Her dog jerked the leash as she scraped squishy piles of German Shepard off the sidewalk into a flimsy eco-bag, threw it in the trash.

Matt hopped over greasy smears the thickness of nickels. He was halfway through a high arc slam-dunk of the fat MacDonald’s bag when he saw it. Sun reflected into the trash bin from a round intersection mirror on a light pole. Nested among empty pints of Smirnoff, ash-tray cigarette butts, and the shattered bag of German Shepard, the purple toy dinosaur, a Carnotaurus, glowed like a beacon. His eyes watered from acrid dog doo. Still, he could hardly believe his luck, Santa Claus, in April.

Back at the car, mom’s spandex-wrapped butt wagged out the back door. Arial, who harvested fruit on her tablet by the car door, got another certificate of achievement from a computer.

Undercover now, Matt opened the Macdonald’s bag in the trash bin. He put a few ketchup packets and a cheeseburger in his backpack. He wiped cigarette ashes mixed with dog doo off the dino with a MacDonald’s napkin.

Matt hurried back to the car, put the backpack on the floor under his feet, strapped in, and tried to look like an angel. Mom’s face was red and puffy from bending over the back seat. Matt kept his hands in his lap and sat in silence.

“Matt, remember what I said. Your supper is in the trash back there, understood?”

“Yes, mother, I’m sorry I messed up the car.” Matt knew a long timeout was coming. He couldn’t wait to play with the most excellent dino he had ever seen.

William, Matt’s dad, returned from a business trip at nine. Charlotte, the goofy babysitter, came at five-thirty. Mom went to Zumba class, then went out for Pinot noir with two girlfriends. Charlotte left Matt in detention until eight. Matt introduced the bright purple reptilian to his other dinos, the ones not in the glove box. They all played on the large Jurassic Park carpet.

‘Show and Tell’ at Bright Beginnings Elementary began at ten o’clock.  Last week, the theme was “something you got on vacation.”  Matt brought an extinct Megalodon shark’s tooth he bought in Myrtle Beach. The theme this week was “something that begins with the letter D.” Matt, number three out of twelve kids, unzipped his backpack on Mrs. Huckleback’s desk. He asked the teacher to read a brief history of dinosaurs. His sister, Avery, helped him write.

“Dinosaurs were reptiles. The name dinosaur means terrible lizard. There were a thousand different kinds. They survived for two hundred million years until an asteroid hit the earth before humans were born. They are my favorite animals. I collect them. I like T-Rex, but I also like a fast one called Carnotaurus. It had an enormous head, sharp teeth, and a tail that slashed like a whip. I brought my newest one to show you. I call him Carno.”

Sun from high windows around the room illuminated the toy like a torch, the head glowed purple, the body a deep blue. Matt held it high so the class could see the ferocious body, blunt head, and tail bent up over the back.

The knees of plump Mrs. Huckleback buckled. She dropped into her chair like a wrecking ball, staring at the animal in horror. Her mouth was mute but open. Kids went wild with excitement, never having seen a dino like this one. Mrs. Huckleback self-diagnosed her anxiety attack, bent down, and took a long draw of Smirnoff from a purse flask. Slowly, she partially regained composure.

“My, my, Matt, wow, what a surprise, indeed.  Your classmates love your new toy.  Let’s give Matt a big round of applause, class.”

Mrs. Huckleback patted Matt on the shoulder. “Matt, I’ve never seen one quite like this. Would you mind if I studied your dinosaur? I’ll return it to you after school. OK?”

“Sure, keep him in his backpack,” Matt answered, beaming with pride. The best show and tell EVER!

Principal Audrey Rumple opened the meeting. “Sandy, explain what happened during ‘show-and-tell’ in your class this morning.”

Sandy removed Carno from the backpack, stood him up on the glass tabletop, and pushed his start button. Carno came live, like the mechanical bull at Outlaw’s Tavern. A ribbon of lights traveled up his tail to a climax of sparkles in his head.

Sandy continued, “I don’t think this is a toy dinosaur. Does anyone know what it is?”

Aimee’s mouth gaped open; her eyes drilled into Jake. Jake’s eyes fixated on the dancing Carno. Both froze in disbelief. Carno’s loud motor ground like a belt sander. Aimee had complained to Jake last week, that it reminded her of a dentist’s drill, broke her concentration, and asked him to get rid of it.

Principal Audrey Rumple – – “I think we agree, this animal is not one found in a five-year-old’s toy box. My guess is Mathew found it in the back of a dresser drawer, not his dresser drawer. Agreed?”

Jake tried to calculate the odds of two identical purple Carno’s related to Bright Beginnings, one in the dresser of Matt’s parents and the one he had thrown in the trash bin. He concluded he had a better chance at winning a PowerBall jackpot.

Jake and Aimee nodded “Yes” to Audrey Rumple’s dresser drawer conclusion as if their heads were connected.

Jake interjected, “Protecting Mathew’s innocence at this tender age is critical. I also add that twelve kids were exposed to a high-tech sex enhancer by our faculty.”

The principal nodded in agreement. “Yes, preserving Matt’s illusion is essential. I’ll call his mother and have her stop by to retrieve her property. I’ll suggest she lock up anything she doesn’t want on ‘show-and-tell.’ Who knows what else Mathew might bring to school?”

Jake and Aimee nodded in agreement, not knowing what else to say.

The odds of Hell rising, were near one hundred percent.  Mrs. Merriweather’s reaction, when handed back her purple silicone sausage, no one predicted. Downstream consequences knew no bounds.

Innocence protected, over time, Mathew grew tired of dinosaurs.  He moved on to jellyfish, then super-cell tornados.

Caroline Murphy Wise, upset mother of Billy, Matt’s classmate, called Principal Audrey Rumple.  Billy should have won ‘show and tell’ with his $300 Brontosaurus. Mathew Merriweather broke the rule, ‘Something that starts with the letter D.’ The purple latex thing with no eyes was not a dinosaur…… 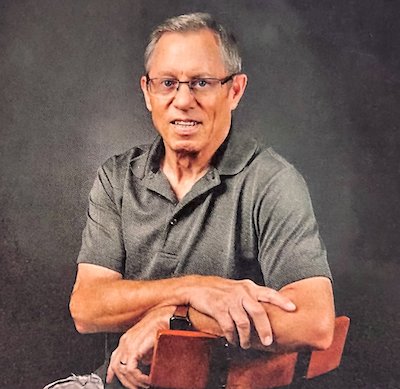 Hank’s short story was one of several chosen to be read aloud at a recent Writers League of The Villages event held at Mystic Ice Cream.

In addition to writing, Hank, a former Air Force fighter pilot, loves wings of all kinds – hang gliding, paragliding, sky diving, ultralight flying. Yet nothing compares to the wings of birds. Humans cannot match their grace, efficiency, or complexity. Hank thinks birds are the most beautiful animals. His specialty, photographing wings at work, doing what all wings do, overcome gravity.

Click here to see some of the birds he’s photographed.