It all started when Denise told me about a turtle with plastic beer can necklace. She was walking around a small pond and saw this turtle poke his head up wearing one of those plastic, six-pack beer can holders. Being animal lovers, we both felt a pang in our hearts for the poor turtle destined to wear this necklace and perhaps getting it caught on something, not being able to move and eventually dying. Yes, we can get emotional; but it could happen.

The next thing I knew Denise and I were decked out in tall rubber boots and, of course, long pink rubber gloves, sitting in her golf cart with a large garbage can and two rakes shoved under the seat. The boots and gloves were to protect us from the muck and snakes. We were on a mission: we were going to clean the pond and save the turtles!

We decided we needed two people, one to rake the debris and the other to watch out for curious alligators. We live in Florida. This is reality – snakes and alligators.

Hopping out of the golf cart, we headed toward the pond. I thought I’d walk a few feet into the shallow pond, so I could reach more trash. Bad idea. Little did I know that the muck had no bottom. I took one step in and my foot kept going down. It felt like quicksand. There was no bottom. I quickly put my other foot in trying to get a footing and that one, too, kept sinking toward an endless bottom. Panicking, I tried to crawl to the shore that was only a foot away. Somehow, I got my knee on the edge and could pull both feet and boots out.

Okay, from then on, no walking into the water. Everything had to be done on the safety of the shore. 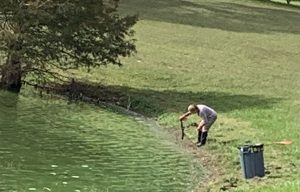 We slowly drove the cart around the perimeter of the pond, stopping to pick up or rake in what we found. I think Denise won the prize. She pulled out two pieces of rubber striping about five feet long and six inches wide. We had no idea what it was or how it made it into the pond, but it was no longer there.

I was finding little things like golf balls, screw off bottle caps, plastic bags, Styrofoam take out containers and plastic water bottles. Did I mention that the pond was next to a golf course? Denise found three golf clubs, yes, three. Obviously, some golfers were disgusted, enraged and had uncontrollable anger.

As we continued our two-hour cleanup, golf carts would drive by and honk or give us a thumbs up. That encouraged us to keep going. 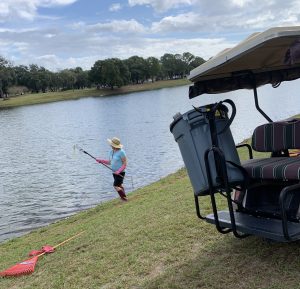 Now, to the beer can lady part – I seemed to have a knack of spotting beer cans in the water. I’d see one, grab my rake, stand on the edge of the pond, lean way out with the rake and drag the can to shore. Busch Light seemed to be the beer of choice. 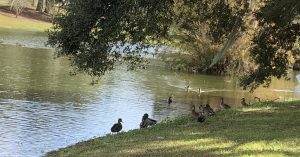 Toward the end of our clean-up, we ran into a group of ducks who were hanging out near the shore. To our dismay, their preferred area was laden with plastic bags, bottle caps, roofer’s nails and other nasty items. Oh, did I mention lots and lots and lots of dog poop. Besides being a duck hangout, it was a dog walkers’ destination. Next time, I hope they bring poop bags with them.

After two hours, Denise and I were hot, sweaty, tired and stinky. Even though we had only managed to clean half the pond, we did a lot and planned on returning next week for the second half.

All I could think of was getting home, jumping in the shower and getting the swamp stink off me.

It’s not easy to speculate how everything got into the pond. We do attribute the golf balls and clubs to the nearby golfers, but the rubber flashing is a mystery.

We hope not every pond is like this, but we will continue our mission to save the turtles from wearing plastic necklaces.

11 thoughts on “Call Me the Beer Can Lady”