Overtones of old books with hints of wood, leather and glue.

West coast bookstores, Powell’s, has happened upon a new product for bibliophiles—“Powell’s by Powells.” According to reports by CNN they have developed a unisex perfume that “creates an atmosphere ripe with mood and possibility, invoking a labyrinth of books; secret libraries; ancient scrolls; and cognac swilled by philosopher-kings,” according to the product description on Powell’s website. 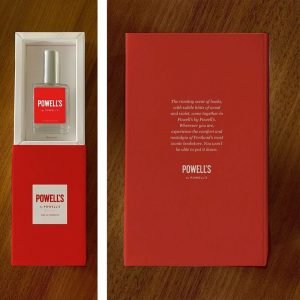 Bricks & mortar bookstores everywhere are suffering from the Covid-19 fallout as well as the rise in online booksellers, e-books, and other factors. The venerable Strand Bookstore in New York City put out an emergency SOS at the end of October that, unless they could get government assistance or an injection of orders, they would have to close. Readers answered with $170,000 in sales over one weekend, crashing their website from the volume. They received 25,000 orders instead of the typical 300.

The Powell’s website description of their scent sells eloquently: “Like the crimson rhododendrons in Rebecca, the heady fragrance of old paper creates an atmosphere ripe with mood and possibility. Invoking a labyrinth of books; secret libraries; ancient scrolls; and cognac swilled by philosopher-kings, Powell’s by Powell’s delivers the wearer to a place of wonder, discovery, and magic heretofore only known in literature.”

Powell’s by Powell’s retails for $24.99 and comes in a 1-oz glass bottle inside a fake book that can also be used for display.

This may be the sign of things to come: Book perfumes, folio food, volumes of verisimilitude. Bookstores—not just for books anymore.