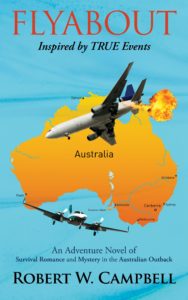 This adventure book was hard to put down. Well written and sure to entertain any aviation buff; especially one from Australia.
E.Daly

Loved loved this book. I especially enjoy not being able to
figure out the ending.
Philip Villanti

Flyabout, was inspired by the true story of 17-year old Juliane Koepcke who was ejected from an aircraft at nearly 12,000 feet and survived the fall into the Peruvian jungle below with only minor injuries.

The setting of this fictional novel, Flyabout, finds Professor Derek Hunter and beautiful flight attendant, Michelle Sherry, hurtling to the surface of the Australian Outback after a catastrophic cargo door explosion blasts open a ragged gaping hole in the side of their aging airliner. Violently ejected out of the aircraft through the hole, Michelle and Derek fall to earth through a brutal thunderstorm.

Their lives are spared when ferocious updrafts drastically slow their descent. While they land in the midst of dense muddy underbrush, (hurt but alive), the crippled and uncontrollable airliner flies onward until crashing hundreds of miles away.

When rescue never comes they undertake a deadly gamble—a hike across the searing Outback in search of civilization. As their torturous journey continues the pair develop a trusting and loving relationship that strengthens daily.

Water gone, and at the brink of collapse, they reach an abandoned station. Though purposely camouflaged and deceptively primitive on the outside, it’s interior is basic except for a lavish gigantic bedroom that’s been, literally, taken straight out of a multi-million dollar Virginia mansion.

The mystery of the Victorian bedroom pales in comparison to the mystery of the station’s heavily camouflaged ‘barn’ which is not at all what it appears to be. What’s inside offers them an opportunity to reach civilization but only if they know how to fly.

Mystery surrounds the missing station’s owner who never returns. When supplies and water run out they face certain death. Left with only one choice they lay everything, including their lives, on the line for one last chance at survival. Calling upon and sharing each other’s untapped knowledge, skills, and sense of humor, the romantically involved pair become a formidable team and make life-changing decisions amid the mystery of the station and their adventures in the Outback.

Flyabout: An Adventure Novel of Survival, Romance, and Mystery in the Australian Outback