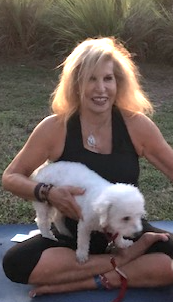 Gianna was born on Staten Island, NY.   In 1959 she moved to Italy. After living in Italy for 6 years, and working in bit parts of movies, Gianna returned to the New York City as a fashion designer.  She opened a small fashion boutique on 52nd Street where celebs like Liza Minelli would come in to buy her fashions and then hang out, sometimes waiting on customers when things got too busy for Gianna to handle on her own.

During this time period 1966 to 1970 she was under contract with Kama Sutra Buddha Records and designed outfits for Rock Groups like the Lovin Spoonful, Jay and The Americans and others.  She travelled with these rock groups to European music festivals.  One night after a performance of the Lovin Spoonful at the Carlton Hotel in, Cannes, France she was hosting the “Spoons” along with Kama Sutra executives in her hotel suite when there was a knock on the door.  She answered the door and standing there were Paul, John and George with their guitars.  The Beatles had also performed that night at the Carlton right after the “Spoons”.  They were invited to come in and sit around on the floor with the American groups and sing songs….The Beatles sang all the Spoons hits and the Spoons sang Beatles.  It was a wonderful experience hearing each group honoring the other’s music.  It was a magical evening. We ordered room service and enjoyed each other’s songs and stories.  Gianna went to open the drapes to discover the sun was rising over the Mediterranean.  Paul suggested going down to the shore, to wade out into the water, to watch the sunrise, of course we all did.  Those were wonderful moments.

Gianna married an Argentine, moved to Connecticut and raised two beautiful children. She and her husband were in Rome, Italy visiting her father riding in his small FIAT, when they were hit from behind. She sustained back and neck injuries which plagued her for years with migraine headaches and a need to wear a brace around her neck.  A few years later her husband passed away while away on business.  She was struck with both physical and emotional pain at losing him at such a young age.  A friend suggested they go to a yoga class.

The Yoga Classes were life changing experiences!  After her third class she was able to get rid of her neck brace, her migraines melted away and she felt renewed and lighter in spirit.  She was so moved by the experience that she decided then and there to become a Yoga Instructor to bring this “healing methodology” to the rest of the world. Thus started her Yoga Journey in 1997.  She began journaling her experiences (hence this book) She took her first certification in Connecticut, frequenting Kripalu Institute on every available week-end.  She began teaching everywhere they would let her throw down a mat:  YMCAs, Churches, barns, backyards…all this while working in the Financial Industry during the day to put her two children through college.

Once the kids took flight and left the “nest”, she made her journey to India, “The Country of The Soul”.  There she traced the roots of Yoga from 4,700 years ago.  She eventually studied other modalities, Ayurveda, Anatomy, Philosophy and took an additional 300 hr training to become certified as a 500+ hr E-RYT.  She has been teaching yoga ever since.

Eventually, she quit her job in finance, bought a yoga studio on Amelia Island, FL and became a full-time Yogi, dedicating herself to a life of healing, and helping others along the amazing path of yoga.
After 6 years on A.I., she sold her studio and moved to The Villages where she continues teaching yoga as well as teaching Italian. She is currently working on her second book for publication.