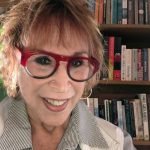 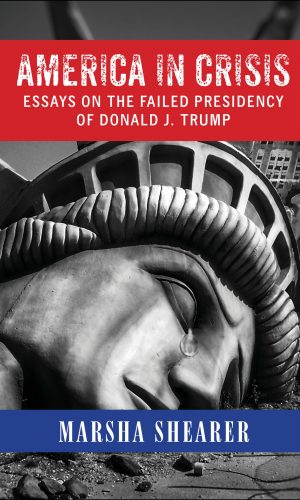 AMERICA IN CRISIS: Essays on the Failed Presidency of Donald J. Trump

In a series of real time, as-it-happened focused, literate essays, Shearer rips the scab off the wrongs President Trump has wrought on America. Then she adds a healing poultice—what we can do to prevent another ‘Trump’ from happening, how we can reunite the people, and restore our country again.

It’s terrific that I get to connect with the readers of “America in Crisis: Essays On The Failed Presidency of Donald J. Trump.” Depending on where you live, you may not have anyone with whom you can easily and quickly process information and reactions. That’s one of the reasons I started writing; it was a way for me to understand and document what was happening—especially because so much was happening so fast.

I live in a very conservative community that’s basically a company town…one of the few in the US. The developer owns the newspaper as well as the local TV and radio stations (FOX News is the default programming at local restaurants and other places of business). While conservatives and Trumpers have platforms to share their opinions, that wasn’t the case for others with a different viewpoint. But that began to change when I was given the opportunity to write opinion pieces for a local on-line paper. It become clear that there were many in our community with the same concerns, and those op eds provided a way to share and comment and support one another. These essays served as the initial core for the book.

As far as I know, this is the only book on Trump and his administration, written in real time over a three year period that provides a record of the worst and most consequential presidency in our history.

So a bit about me. I enjoy working out at the local gym – especially when I’m done. I play lousy golf, garden – all the usual stuff. I run a neighborhood book club – mostly fiction, and I’m also a member of a progressive reading group…we only read about politics and religion but just from a liberal viewpoint. That has been pure joy – especially in these times. I’m a news junky and I’ve always loved politics. I’m active in our local Democratic Club and spend hours each week phone banking, networking etc as we move headlong toward the 2020 election.

I’m direct, honest, I admit to swearing a lot – much more so in the past 4 years. Social media skills are meh. Facebook yes, Twitter, not so much.
So that’s a bit about me. Now it’s your turn. I’m especially interested in what you think about the book, about a special essay that you connected with – or not. It’s one thing to bitch and moan about what’s happening – we’ve all done a lot of that. But with the election just around the corner, I’d like to focus on what we can do to fix us – the process that led to Trump…and what we can do to bring us back together. I presented some thoughts in the final essays – would love to hear yours. My email is mshearerinfl@gmail.com and you can find me on Facebook.

Thanks for reading the book and I’m looking forward to learning from and about you.
Best, Marsha

This is a work that sorely needed to be written

This is a work that sorely needed to be written. Sorely in the sense we need to be reminded just how mind-numbing the cascade of insults to rationality, common sense and decency has rendered the body politic. Everyone needs to read this book, which catalogs stunning political malfeasance, as a reminder of just how ordinary extraordinary pathological behavior at the highest level has become.

A gripping account of how the water got hotter and the frog survived. (so far)

Bite-sized chunks is probably the best, or indeed only, way to get through this book. Otherwise it would be like drowning in a sea of Trump soup, floundering among the flotsam of tweets, directives and staff firings thinking ‘there must be a good bit in here somewhere, a place where the man shows an ounce of commons sense or empathy for anything other than himself.’ There is not.
In a series of articles starting in the election year when there was still a semblance of normality in United States politics, the author charts the course that has led the country to where it now stands in early 2020.
The unbelievability of how the situation got to where it is sadly believable.
A well written account by an author who clearly knows her stuff. Kudos to her for not wielding the editorial knife and cutting some of her earlier predictions that ‘this cannot go one much longer.’ It did.
And scarily, maybe it still can.
I enjoyed it.

“In her own inimical way, Marsha Shearer has addressed many of the actions of Donald J. Trump that have been the cornerstone of his presidency.

“In her own inimical way, Marsha Shearer has addressed many of the actions of Donald J. Trump that have been the cornerstone of his presidency. Her essays characterize his issuance of outrageous tweets as both creating daily chaos and stoking hatred and fear. While clearly a foe of this President’s actions, Shearer focuses her attention on the declining participation in elections and advocates revisionist thinking for both political parties to provide voters with better candidates to lead America’s future. BRAVO!!!”

“In this book, Shearer chronicles her intellectual and emotional response as she comes to grips with the enormity of the Trump presidency. These essays shine a light on significant issues and offer hope as well as suggestions for their remediation. In sum, this book puts into perspective the dangers posed by Trump’s behavior; by allowing them to pass unchallenged risks them becoming the ‘new normal.’ Shearer’s essays provide that challenge.”

Future historians will debate and judge

“Future historians will debate and judge the long term effects of the Trump presidency on the nation and the world; in this series of essays, Marsha Shearer offers a provocative early contribution to that debate. Her analysis and arguments are thorough, well-considered, cogently argued and cover a wide range of policies, actions and decisions, ultimately passing a devastating critique on President Trump and his administration. Whether one agrees with her conclusions or not, these essays set a high bar for both supportive and countervailing analyses of the Trump years.

These vivid, insightful set of essays by a clearly gifted writer are truly remarkable. Shearer’s marvelously detailed and engaging entries chronicle the time just prior to the 2016 election through much of the first three years of Trump’s administration. The universal appeal of these essays stems from its riveting blend of the particulars of life during the Trump era while living in Trump country; the result is that reading these well-written and engaging essays serves as a cathartic experience for the rest of us.

She wrote so she would not forget

I have enjoyed reading Shearer’s opinion pieces for the past several years; now she has expanded them and turned them into a series of essays on the Trump Administration outlining her serious concerns. The clarity of her writing is only surpassed by her clarity of thinking. She says she wrote so she would not forget. I hope as you read them you will not forget the events of the Trump Presidency.  After 30 years in the US Army, I cannot understand how any military officer can support this Commander in Chief.