HERE WE GO…The morning wake-up call was right on time…5:30. Coffee, rolls and fruit and on the road by 6:00. We’ve got a big day and some distance to cover. As my eyes were beginning to focus through the real fog, it appeared we were heading north. Today was the day…Kaokaland (no, definitely not Disneyland)! Everything we had done here in the Skeleton Coast led up to this genuine adventure. Two desert safari vehicles, extra provisions and some additional gear that was loaded under covers. Yup, today’s game plan was the main reason I signed up for this expedition.

If you happen to read any of my last few posts, they were merely a warm-up of what it’s like to travel this route. Through the desert, across and around the mountains and over terrain that defies our equipment. Just after 9:00 we had our first flat tire and by 11:00 our second (pictured here)….and these are 10 and 14 ply tires! Nothing unusual though, we’ve still got 2 more spares. Yes, we are truly on safari on the Skeleton Coast. 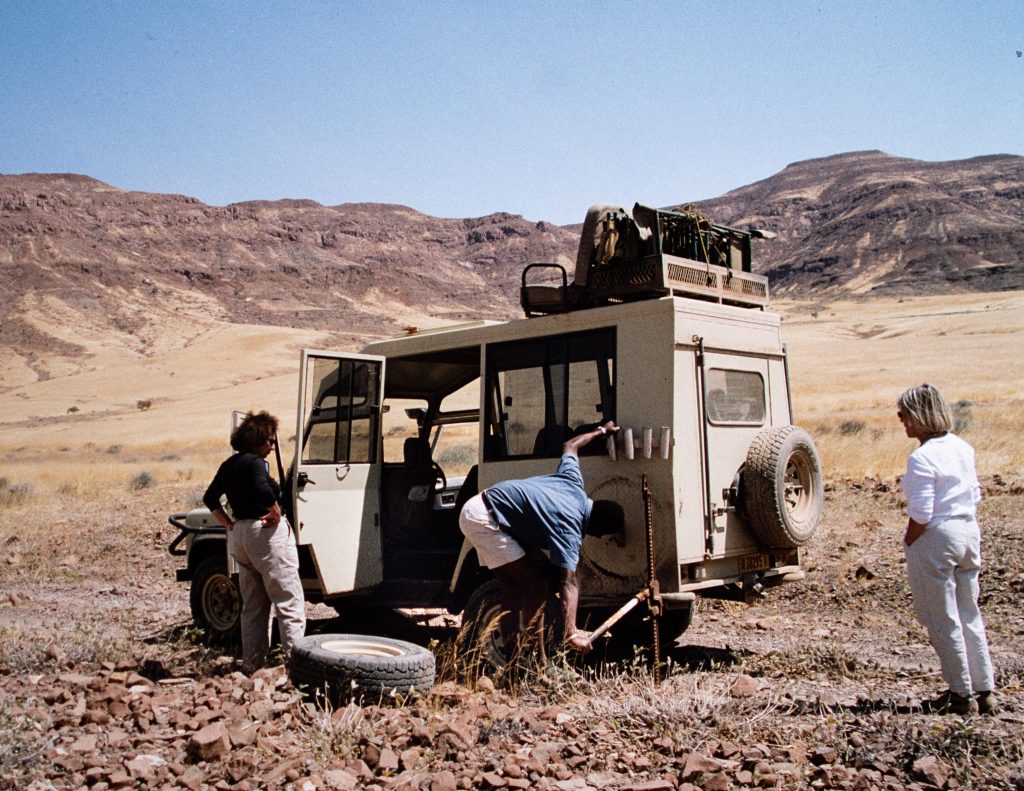 We are headed further north toward the Kunene River region where desert elephant, lion and black rhino may be found. Yes, even the wildlife must adapt to these incredibly difficult living conditions. Just imagine, the largest land animal on the planet has had to alter its behavior and anatomy to live here. The desert elephant is a bit smaller in body size, yet has wider foot pads so it can avoid sinking into the deep sand. Herd size is also smaller which makes it a bit easier to find enough food when it can be located.

Unlike elephant in all other regions that require water on a daily basis for survival, the desert elephant has even adapted to going several days at a time without water. Their trunk is actually somewhat longer to allow them to stretch deeper into the sand to reach water, which they dig up  using their powerful feet as shovels and their tusks as picks. And by the way….don’t ever deny their intelligence. Unlike other elephant they don’t dig up and destroy the plants and trees that feed them, but rather, they have learned to preserve these hard to find plants and trees so they can return to them as a food source. What a great idea, use only what you need so there will be more when you need it later. Hmmm….could there be a lesson here for ‘intelligent’ humans…and governments (oops, I let that slip, my bad…). 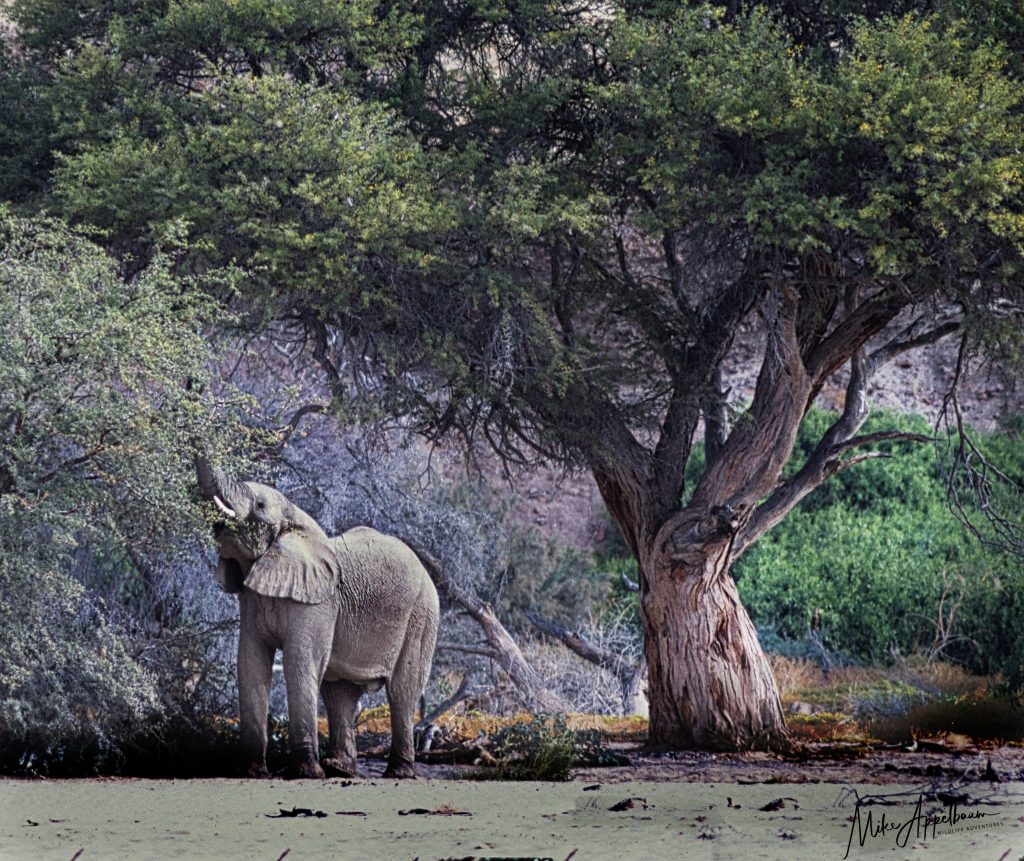 Although the wildlife in this extreme area was certainly a big factor in today’s journey there were other inhabitants that were even more unique and far more exotic than anything else on the Skeleton Coast. My goal was to make contact and visit with these other residents. You see, this is also the homeland of the most remote and unchanged traditional tribe I’ve yet to encounter. The Ovahimba. We know them as simply, HIMBA. 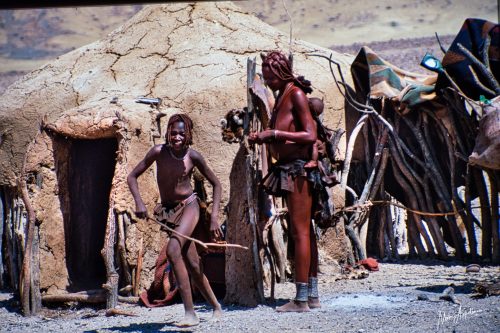 They choose to live and look exactly as they have for hundreds of years. Seriously, no changes. If National Geographic ever came out with an issue of the most exotic tribes they could start right here. As you might imagine the people have also altered their behavior to adapt to this harsh desert existence. The women never bathe in water (except one time before marriage). Really…they coat their entire body, every single day, with a red ochre paste made from crushing ground pieces of pigmented hematite rock withthe resin of the aromatic omazumba shrub (don’t bother looking for this shrub in your local Lowes or Home Depot) and mixing it with heated fat or butter from their cattle. This paste is called “otjize” and once again, will not be available from Loreal. Red is the color of the earth and is symbolic of blood, the very source of life. They believe this is what makes them beautiful and protects them from the elements. 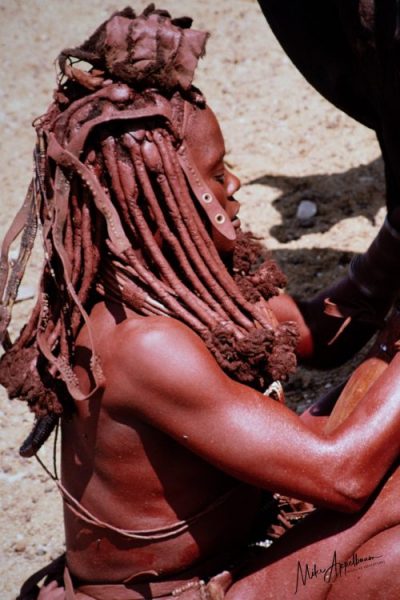 In spite of their incredibly stark and desolate location, the women are extremely conscious of their personal appearance and consider their hair to be the most important element on the scale of beauty. Actually, the customs and rituals regarding HAIR are extremely important aspects of the Himba society. Communal hair braiding is normal in these family units and styles are both symbolic and quite elaborate. In fact the Himba woman in this image would certainly earn 10’s for her stylish hairdo. Just as a side note, this also distinguishes them from the men who don’t do any of this.

Now that we’ve come this far together and we’re spending time with this very remote family we once again rely on our “ever-present-all-knowing” local guide, Festus. You see, these remote Himba have had no need to speak anything but their language. My minimal knowledge of Swahili is totally useless here (and almost useless in most of southern Africa), but Festus is fluid in otjihimba, a dialect of the language of one of the largest tribes in Namibia, the Herero. Now, don’t worry….you won’t be quizzed on any of this but, unfortunately for you, I find this stuff fascinating (consider yourself lucky if you never have to spend time on an island alone with me). So, through Festus we find out why all the men of the village are missing. Yup, all gone…not a man in sight. Just the women and children. The women proceeded with their chores and the children tended the few cattle and goats that remained. The men have taken the tribe’s most important possession, their cattle, to find a new place to graze. While a few head of cattle remain in the village for the women and children, the men have taken the rest in search of grass that might be found along the Kunene River miles away.

​Himba society is well-defined by duties and responsibilities determined by the age and gender of each member of the family. Basically, women do the hard work of water collection, firewood gathering, hut building, child rearing and you may as well include food preparation. Children also have responsibilities based on their age and includes caring for the goats, sheep and other animals. Men are responsible for the cattle care and all matters “political” including trading with other tribes and making all the “major decisions” for the family/tribe. In other words any Women’s Rights movement is still many years from arriving here. 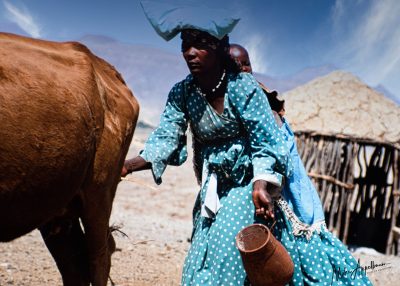 The Himba are pastoral people who pride themselves on their cattle (similar to the Maasai and Samburu of Kenya and Tanzania). Originally the Himba were part of another tribe, the Herero. When German settlers came to Namibia in the late 1800’s they brought Christianity and the Victorian Era, The tribe divided into those who refused to change their ways and traditions, the Himba, and those who chose to live like and dress like the colonials, the Herero. For this reason I was amazed to find this stunning Herero woman in her everyday typical dress (including her hat which is formed in the shape of the horns of the cattle) tending the milking of the cows and everyday work along side of the other Himba women. What was she doing here? Had she married into this tribe? How did she get here? 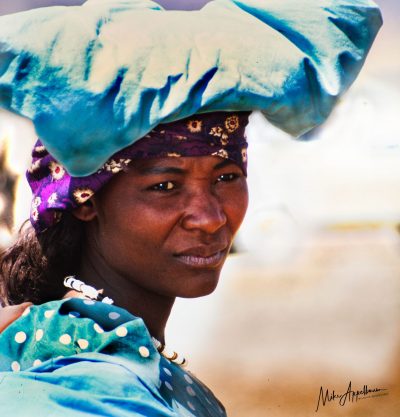 Spending hours in the tiny Himba village was an incredible experience.. We brought some supplies for the village and ultimately began our journey back to camp. What an amazing day. Oh, I almost forgot. We made it back without any more tire problems and had a great elephant sighting as well. Unfortunately, it appears I will spend the rest of my life wondering how and why that beautiful Herero woman ended up in that village. So many questions in life just don’t get answered.