You can get anything on Amazon. Breakfast cereal to HVAC capacitors to books. Although the details are a bit different, Amazon was not the first to offer everything.

Back in 1893 the internet was not yet a thing when the first Sears, Roebuck and Co. catalog was printed and distributed. It included watches and jewelry and a year later also featured sewing machines, sporting goods, musical instruments, saddles, firearms, and clothing—among other items. 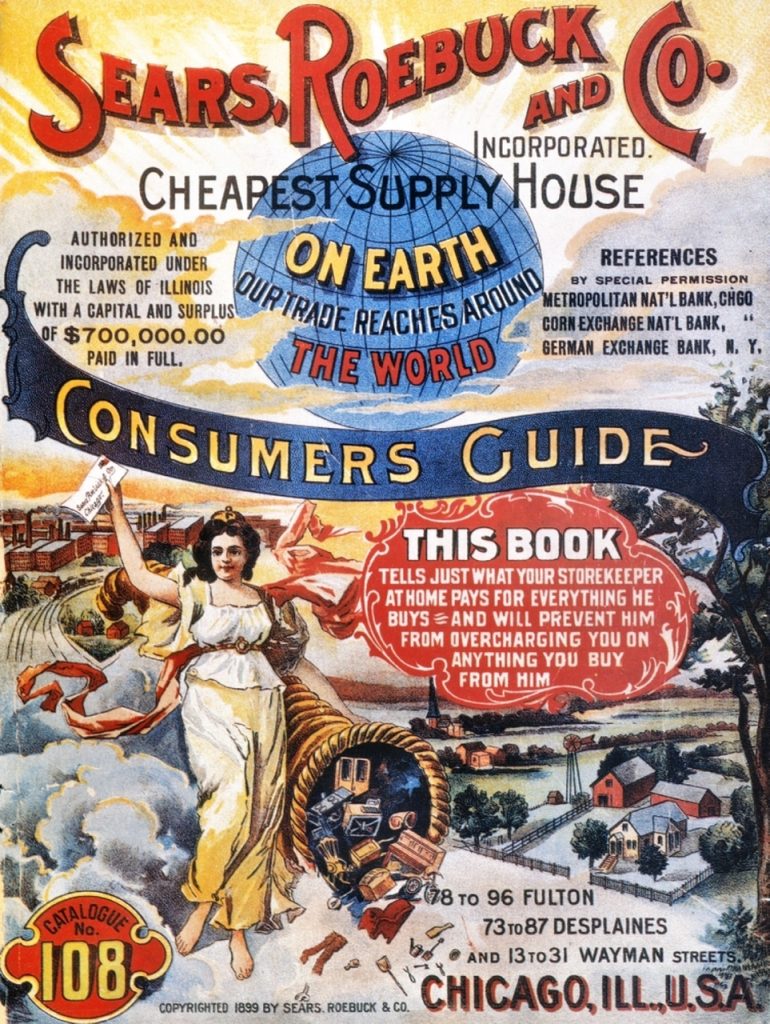 Nor was delivery the next day. Things were a bit more leisurely. Get the catalog, look through it, place an order by mail, wait for fulfilment, get the goods in the mail. By 1913 you could buy a car from the catalog; by 1914 an electric power plant for the farm. At one point in the 1930s you could buy one of several styles of a complete prefab house that arrived by truck or rail complete with windows, doors, nails and hardware.

I grew up in Eastern Canada and by then we had two catalogs: Simpsons, and the T. Eaton Company.

Catalogs arrived, probably two inches thick, three or four times a year; plus a Christmas “wish-book” catalog in color. Living in farm country, the catalogs were our lifeline when we couldn’t get into “town.”

Think of the convenience. “Town” was ten miles away and “The City” was almost 30 miles. On narrow roads at max speeds of 30 miles an hour, getting to Town took upwards of 30 minutes. Instead, we would sit around the oilcloth-covered kitchen table, thumb through the catalog pages, and order the items we needed—and could afford. A stamp cost pennies, the post office was across the road, and a money order was cheap. By the time the box arrived, we’d almost forgotten what we’d ordered, so it was a bit of a surprise. Of course, if it was the wrong color or didn’t fit, it could be sent back—just like Amazon.

If something wasn’t in stock or there was a refund, both Eaton’s and Simpsons had their own “scrip” money which could be used for future purchases. 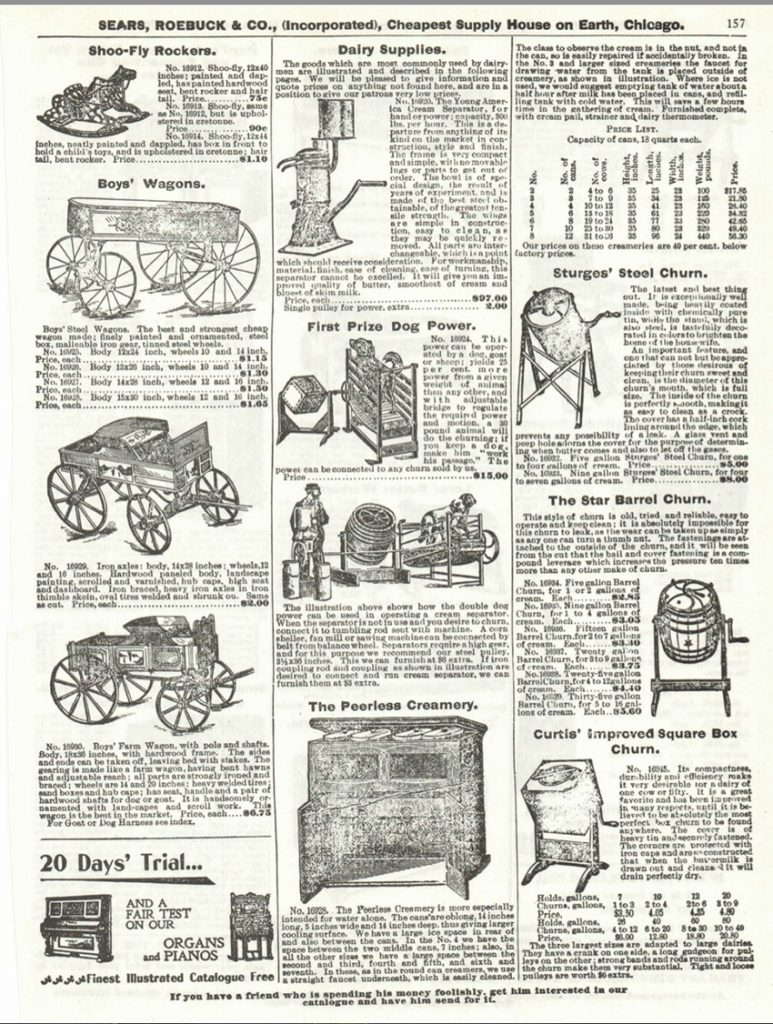 The catalogs had pictures and illustrations of everything they sold along with the description and prices. Want to see ladies wearing girdles? Look on page 167. How about manure forks? Yep. Page 230. Winter coats and overalls, underwear and fedora hats, wood lathes and curtain fabric. 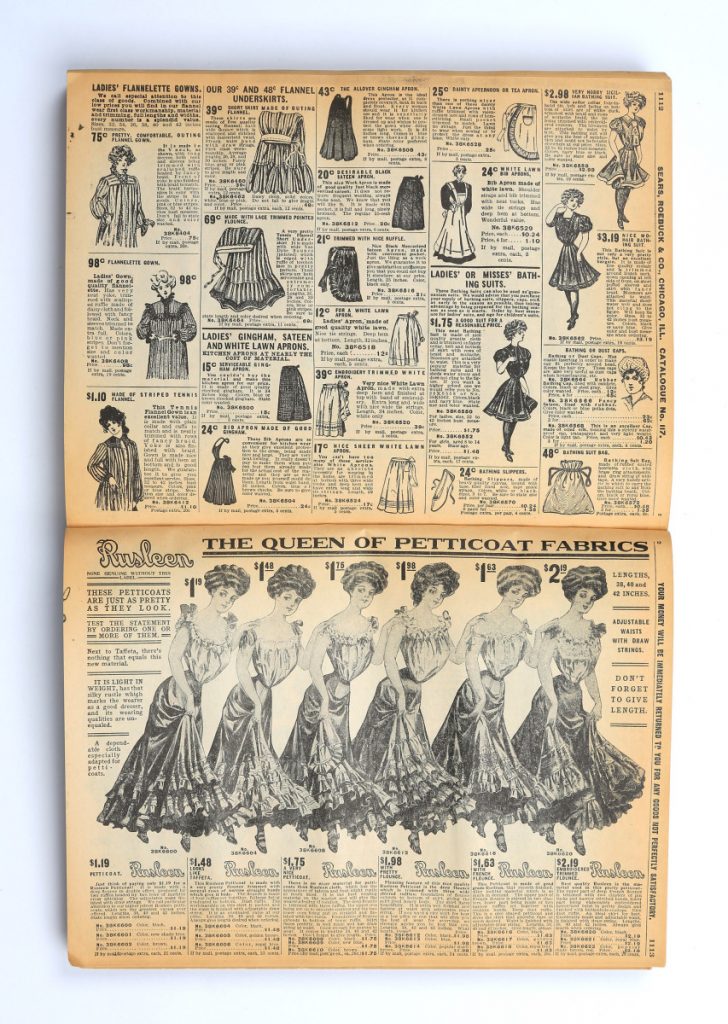 You could even buy live baby chickens that would be delivered by the post office.

(I checked on Amazon and although they did not have live baby chickens, they did have fertile chicken eggs that you could incubate and thus get the chicks. In case you’re interested, they do sell live meal worms as well as dried crickets. Yum!)

Unlike the Amazon facilities filled with scurrying robots, intelligent conveyors, and bar codes, our catalog orders were fulfilled by hundreds of human workers roaming around cavernous warehouses with push carts, manually pulling items off shelves and out of bins. Knowing where the manure forks, girdles, and curtain fabric were located would be mission critical.

While the catalogs were convenient for us, for the people who lived in isolated parts of the country, they were critical for life. In the northern areas of Canada, the incoming mail always included boxes from Eaton’s and Simpsons. The post office charged a set fee based on weight and size no matter the package destination. The postage cost for the wood lathe destined for the other side of town was the same as the lathe sent to a remote fly-in village in Labrador.

In one of my former lives I flew into a remote Labrador village just before Christmas. As soon as the skis of the bright red Otter aircraft touched the snow we were surrounded by dogs, people on foot, on snow machines, and sleds waiting for the mail to be offloaded—dozens of boxes from the catalog stores. We were their link to the outside and we had flown in Christmas with us.

The catalogs had one extremely vital use that even Amazon would be hard pressed to replicate. Back in the days of the outside privy, the out-of-date catalog pages often served as random reading material that were recycled while serving their purpose.

Alas, the catalogs eventually ceased operations in the early 1990s. The costs were overwhelming, and the audience was becoming more urban. The enterprises were unsustainable. Shopping malls killed the catalog star.

The next time you order a mouse pad, cat litter, or a pair of sneakers on Amazon remember, they were not the first, just the latest.

3 thoughts on “Amazon Was Not The First”