Lud Spivey wasn’t sure why he become a Halloween prank. Lud didn’t understand a lot of things in life. When Martha was alive he didn’t have to understand, she did the understanding for him. He wished she had not left him, but he figured God must’ve needed her more than he did. Preacher Simmons told Lud that God would let him join Martha someday and he was really looking forward to that. Life was hard without her.

Lud thought the single biggest mystery in his life was why Martha loved him. He wasn’t a smart man. He quit school to help his Pa on the farm when he was fourteen and still in sixth grade. He sure as fire wasn’t good looking. He was too big to be good looking. His legs were too long and his arms were too long and his chest was so big Martha had to make his shirts extra large. And the only thing he had worth a penny was the farm, and it was barely worth that, being all rocks and hills.

About the only thing Lud enjoyed anymore was sitting under the big, old oak behind the house and looking down at the lake while he sipped lightning and daydreamed about Martha. Lud and Martha had knowed each other from being little kids. Growing up he didn’t think much about girls, maybe because girls didn’t think much of him. When he was in school the girls always laughed when he was around and he never knowed why. Some of them would talk to him and say things that made the other girls laugh. He didn’t understand the jokes. But Martha was different.

Martha was a big girl like Lud was a big boy. She wasn’t tall as Lud, but she was as big around. Lud saw her standing next to him in a mirror one time and thought they looked a pair. After Martha’s brothers got married and moved off the farm it was just her and her Pa. When her Pa got the cancer and died, Martha’s oldest brother came back with his wife and babies and told Martha she had to get. Lud’s Ma said Martha should come stay with the Spiveys. She did and she never left.

Lud’s Pa died when a mule kicked him in the head. It took him a year of lying like a lump in the bed with Ma and Martha feeding him and cleaning his messes before he was really gone; but he died in the head when the mule kicked him. Ma lasted another year and then it was just Lud and Martha. Preacher Simmons said it weren’t right for two unmarried people to live together, so he married them. After that the preacher said it were fine if they went skinny dipping in the lake together.

For almost sixty years Lud and Martha worked the Spivey place. They were respected by their neighbors and their odd ways were overlooked. Then God needed Martha and Lud was alone.

Doc and Preacher Simmons brought around a pretty young thing and she had him sign a lot of papers. After that, nice people sent him money every month to buy vittles. He always made sure that he had enough money left for lightning after vittles.

One fall night, abouts a year after Martha left, a loud thud woke Lud. After listening for a spell and hearing no more thuds he went back to sleep. He and Martha had never got the indoor outhouse that most folks had, so he had to go outback to do his morning constitutional. The morning after the thud the outhouse was resting lazy like with the front door on the ground. Lud had to go over to Martha’s brothers place and get her nephew to come help him gets his outhouse back on the hole where it belonged. He couldn’t for the life of him figure how’d it fell over; musta been a heck of a wind gust last night.

The next fall Lud’s outhouse blew over again. It was Martha’s nephew that explained the way things were to Lud.

“Uncle Lud, this is two Halloween nights in a row your outhouse blowed over. I thinks the wind had some help from some of the boys around here.”

Lud didn’t know what to say about that, so he said nothing.

The next fall Lud caught himself the flu bug. He was awful sick and was running out to the outhouse all day and even after he should have been in bed.

He was sitting on the throne, sicker than a man had a right to be, when he heard voices. Before he could do the needed paperwork, the outhouse was over on the front door and Lud was sprawled on the door with his pants around his ankles.

Lud spent the night in a real mess. He wasn’t over being upper or lower sick, and he couldn’t get out of the outhouse. He tried to pull the seat off the throne, but he had made it too strong, and it wasn’t comin’ apart without serious tools. It wasn’t till the next morning that Martha’s nephew came over to check on the outhouse and found it not only blowed over, but occupied by his uncle.

“Uncle Lud, is you in there?” Martha’s nephew asked.

“I gotta go get Pa and Buford to help right this thing. Don’t go nowhere.”

When the outhouse was upright, the door opened and Lud crawled out. The arthuritis made it real hard for him to stand. Martha’s two nephews and her brother liked Lud well enough but they were not about to touch him, he was so foul. Lud struggled to his feet and instead of going to the house he went down to the lake. He shucked his clothes and walked into the water, even though the temperature was cold enough to turn his manhood into boyhood.

Maybe for the first time in his life, Lud was mad. Them boys had gone too far. As was his nature, Lud didn’t rush to anything. Martha’s nephew wanted him to call the sheriff, but Lud said, “No,” he had to think a while. Lud thought all that winter, spring, and summer.

Lud figured them local boys thought outhouse tippin’ was lots of fun, but he knowed how to put a stop to it. He asked Martha’s nephew for help. Her nephew thought Uncle Lud had a great idea and made a couple suggestions of his own.

Halloween was a warm night, good for trick or treating and egging houses.

“Uncle Lud, why does you always say I is Martha’s nephew? I is your nephew too.”

“I wants you to call me your nephew from now on. Can ya do that?”

When they heard the first voice, Lud’s nephew reached over and turned something on. The voices grew closer and closer. Then there was a loud yell, a light lit up the outhouse as two boys and one girl took one last step before they fell into years of Spivey family muck.

It was Lud’s idea to move the outhouse. The night before, after full dark, him and his nephew moved the outhouse six feet forward, exposing the smelly mess. They covered the hole with small sticks and leaves that wouldn’t hold up a rabbit, let alone an outhouse tipper. Lud’s nephew had brought some of his toys over and strung them up in the trees and along the path to the back of the outhouse.

The toys got everything on video. When he first heard voices, he turned on his infrared recorder and captured the approach. The tippers last step before the hole hit a trip wire that turned on the spotlight and movin’ picture camera.

The hole was originally six feet deep, and now was about four feet full. Two boys and one girl felled forward face down into it. The stirred-up mess smelled something awful. The more the three vandals struggled to get out, the worse it got. After the longest while of struggling, they managed to climb out. They were covered in filth, from the top of their heads to the bottoms of their feet, and they stunk to high heaven. It was in their eyes and even their mouths, they couldn’t wipe their faces with their filthy hands.

Lud felt pity and yelled out the window. “Goes on down to the lake and wash off.”

Lud’s nephew had no pity. The next day the whole thing was on YouTube. With names. 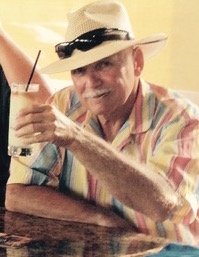 Author Bill Hurst, formerly of Detroit, moved to Florida seven years ago to escape the cold.
When Covid kept everyone house bound, he started writing and then stumbled upon a local critique group. The leader told new members that if they spent three months with the group, they would become better writers. That’s exactly what Bill did.
When Bill was a little guy, he loved sitting in a corner listening to my grandfather and his friends swap stories and lies from the South. Lud’s story was in there somewhere.

Bill’s short story was one of several chosen to be read aloud at a recent Writers League of The Villages event held at Mystic Ice Cream.

5 thoughts on “A Nasty Fall on Clinch Mountain”