This Tribute is near and dear to my heart and represents one small, yet never to be forgotten time in a life that was joyous and full. A tribute to Fathers all. I was one of the lucky ones….to have this and many other wonderful memories with my……

It was the smallest group I’ve ever taken on safari. All friends that spent years saving up for their ultimate dream trip. Kim, Kathy, Gail, Michelle, Burleigh and of course…”Papa Safari”. Of all the participants, Papa Safari was certainly the most ready for anything. While most people look over their itinerary for their upcoming trip and choose their clothing needs accordingly, Papa Safari didn’t care.

The only thing important was that he was going to Kenya for 2-1/2 weeks. Marlin Perkins, Frank Buck, Tarzan, Discovery Channel, Jungle Jim, National Geographic….all had gotten there before him, but none of them could have been more excited about it. He was ready! In fact he was more than 70 years ready.

Since he grew up in Brooklyn, the closest he ever came to any African wildlife was on pages of natural history books and magazines. Nature books would always inhabit the shelves of his home library. Many of these books would later be passed on to his first born, but that’s another whole story….

His camera was an old Nikon recently purchased at a garage sale. Just prior to the group’s departure he negotiated for a zoom lens that was so well priced he couldn’t pass it up. He knew he would put it to good use during the next 2-1/2 weeks and thankfully, it just happened to fit on ‘his new’, old Nikon.

Camera, film, binoculars, suitcase and tickets in hand, our adventurer was on his way. For the only time in almost 50 years he would be leaving his wife, Irma, at home while he was off to fulfill a lifelong dream. Lion, rhino, leopard, elephant, giraffe….endless herds of wildebeest and zebra during migration, all would soon be close enough to smell and quite literally, touch. This would be an experience that few could fully appreciate if they had not themselves been there.

During the coming days the group would waken at 5:00 am and be off on early game drives before the first rays of light appeared in the cool morning sky. Papa Safari was never late. Always up early and ready for the new day. It was my greatest pleasure to witness his excitement and energy.

At dinnertime as the group recounted the events of the day he was always animated and added his perspective. When our dinner was the “local game” he didn’t hesitate for a moment. In fact one time after trying the first piece of meat served, his comment was… “that was pretty good, what was it?” When I told him it was crocodile he immediately asked for more.

One of the popular stops in Kenya is a visit to either Treetops or The Ark, two lodges where you remain inside while the wildlife comes to the waterhole to drink and bathe, seemingly for your viewing pleasure. Guests can be contacted in their room at any hour of the night when one of Africa’s Big Five (elephant, rhino, lion, leopard, Cape buffalo) makes an appearance. However, the image that is so clear in my mind is that of Papa Safari at The Ark, wrapped in a wool blanket at 4:00 am in front of the main viewing area window, eyes closed with binoculars in his lap, but remaining there all night, not willing to miss a moment…just in case “something” wandered by.

Probably the most unforgettable day was the 2nd of August. We were in one of the most remote areas in Kenya called the Northern Frontier District. Truly perfect for a safari, it was all wilderness and wildlife. We were up even earlier than usual in order to meet my friend Adam (whom I met years earlier when he worked at one of the lodges). Adam, a Samburu, is highly respected in his tribe and he was going to lead us to his village for a very unique morning. Since the Samburu and Turkana are nomadic tribes his village is truly off the beaten path and in fact not even our local guides knew how to find it. Other than Adam, few others even spoke English, but that didn’t matter to Papa Safari, he was taking it all in…visiting every hut, playing with the baby goats, joking with the young “morani” (warriors), learning from the morani how to shoot with their bows and arrows and even witnessing the taking of blood from one of the camels (note: this does not hurt the camel, but they do drink the blood as a significant part of their diet…I bet you thought they only drank blood from cows). In addition, Papa Safari was totally fascinated by the 100+ year-old village “holy lady” and her history.

Upon leaving Adam and his village our little group was in a state of total awe. It was difficult to believe what we had just seen and where we had just been. What could possibly follow a morning like this…..?

Driving several hours south, our next stop was the world renowned Mt. Kenya Safari Club, made famous by one time owner, actor William Holden. Frequently seen on the old TV show (many years ago) Lifestyles of the Rich and Famous, this was an exquisite contrast to our amazing morning.

Mt. Kenya Safari Club is unbelievable!  Sitting right smack on the Equator (7,000′ elevation) at the foot of Mt. Kenya, it is the epitome of old British charm and the elegance of the colonial era. Even golf and tennis on safari. Wow…really, wow! A Samburu village in the morning and 8 course fine dining in the evening. It is here that Papa Safari celebrated his 74th birthday. An amazing meal, delicious birthday cake and happy birthday sung in English, Swahili and even Chinese thanks to some delightful visitors from China….and topped off after the singing with a call from home that we were able to get “patched in” to the dining room (remember, this was back in 1989) .

Yup, this was my all-time best safari. I will always have these incredible memories of my safari with my dad, Artie Appelbaum, who finally got to join me and live the life-long dream he had of going to Africa. He’s been gone for 20 years now, but seeing the images of our safari brings back all those fantastic memories.

Even now I can almost hear his response to a friend who once asked… “So, Artie, have you ever played golf at the Doral Country Club?

“No, but….have you ever played Mt. Kenya Safari Club?’ 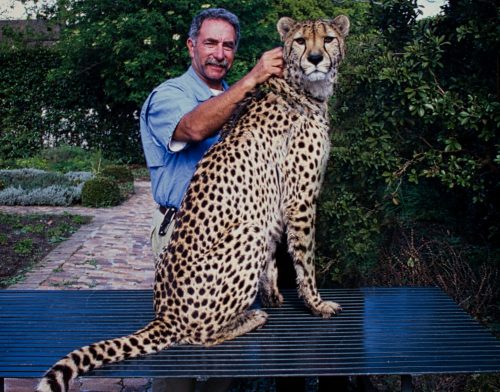 14 thoughts on “A Father’s Day Tribute”