He sits atop a small knoll, overlooking the children’s playground in the shadow of lilac bushes. His white hair stands at various angles, his black cardigan droops on his shoulders, his pants support holes, and his sneakers need to be tied. Incapable of sitting up straight, his steel-gray eyes, under bushy eyebrows, peer down at the children below. He studies each boy on a swing and each girl on a seesaw. Their mothers’ group at a bench, talking while their children play.

Spoiled brats, he thinks to himself. Don’t care about anything but themselves, playing, always playing. At their age, I helped my father, doing little jobs. No time for play, nothing. What do they know about work—spoiled brats don’t deserve to be here.

As the weather cools, the mothers move from the bench and, continuing their conversations, walk toward the playground.

Ha! You finally realized you have kids here. Good thing. You’re not old enough to be mothers, not real mothers, can’t be over thirty, all dressed in sparkling sweats, high style shoes, and fancy handbags. I bought my Ruthie a Gucci fancy bag once. I saved all month—no lunch—to buy her that bag. She saw it in a window and talked about it for days. Only took it to church on Sundays. It was her everything, her love. I wanted to put it in her casket so she could take it to paradise. Before they closed her, I brought the bag up to the coffin. I was about to put it on her chest, but I couldn’t.  She so loved it.  I just couldn’t let go of it. I started to shake and sob, but Fred, our son, put a hand on my shoulder and led me away with a slight hug. They’ll throw out their shoes when the summer’s over. I still have her bag.

The mothers continue talking on the side of the playground until the blonde in tight pants—red with yellow and green paisleys—looks up at the man on the hill. She taps the mother next to her—the one with oversized yellow sunglasses—and points up. The others get the message and follow her sightline.

The mothers huddle closer together, looking up and then turning back. A policeman walks by, and they pull him into the circle. At first, he smiles at each, nodding his head. Soon the blonde points to the hill, and all heads nod. Finally, the policeman also looks.

The policeman speaks to the group, individually and as a whole, and then leaves. The mothers return to their circle. Few look up.

You gonna throw me out? I see you plotting like a football team on the losing edge. Go ahead, try. You ain’t gonna do it. You ain’t strong enough.

The mothers call the children and bring them into their group. One child, about ten, with long red pigtails, black shorts, and a “Yankees” t-shirt, leaves and runs past the basketball courts. The mothers gather the rest of the children and move towards the gate.

Calling in the reserves, heh? Sent the kid for the menfolk? They’re not strong enough either. I held off a squad of Jerrys by myself for two hours before they got me. The platoon got out. You’re not gonna kick me out.

The sun starts to set behind the hills, casting long shadows over the playground. A figure approaches the man.

“They’re about to close the park, Mr. Morgan,” a heavy woman in white tells him, gripping the handles of his wheelchair. “We’s gotta get you back in time for dinner. It’s nearly six o’clock now. This the first time you’re out. We’s don’t wanna be late.” She tightens the strap around his middle. He grunts. “I know, not too tight, but we’s can’t have you fallin’ out now, can we.” She wheels him down the path to the exit gate where the group is standing.

They’re gonna tell me never to come back. I scare their kids. I shouldn’t be here, this is a park for kids, not old men. They want me to stay away, by myself, alone.

The chair approaches the gate and slows down. The mothers grip their children in front of them and stand rigged in a straight line. The little girl with the red pigtails comes forward. Her hands are behind her back. She faces him and gives the old man a bouquet of wildflowers.

“Well, thank you, sweetie. That’s so nice of you.” the woman in white forces them into his hand, squeezing the flowers in. “These will look so beautiful in his room.”

The mothers and children step back as he’s wheeled past. They do not see the small tear fall from the side of his good eye, or the slight smile forced on his lips. 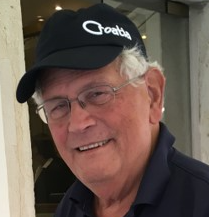 Larry Chizak was born in New York City, received a BA in Philosophy from St. Mary’s University, Baltimore, MD, and a MA in History from Fordham University. He was a high school principal for twenty years before his retirement. Now, he is a writer of short stories. He resides in The Villages, FL and Danbury, CT.

Larry’s short story was one of several chosen to be read aloud at a recent Writers League of The Villages event held at Mystic Ice Cream.

Those accepted and published are:

“There Are No Dahlias In Detroit” in The Foliate Oak Literary Magazine from the University of Arkansas-Monticello, winning second place in magazine fiction writing from the Arkansas College Media Association, also published in Journey’s VIII – An Anthology of Award-Winning Stories by Court Jester Publications; “My House” –inStirring: A Literary Collection; “The Canteen” in SNReview; “Fire in the Windows” –  in Still Crazy; “Ralph The Rat: An Urban Fairy Tale,” in Critter Capers –For Animal Lovers (2015), “My Devil and Me” – in Takahe 93 – Takahe Magazine, Christchurch, New Zealand and “The Lone Wolf” in Down in the Dirt, October 2020

4 thoughts on “A City Park”