All right. I admit it. I’m nervous. Who wouldn’t be when you’re about to meet the wealthiest man in the world? Especially with what I’m about to ask him.

My father told me stories about Jesse Ford and how he saved the world from a catastrophe nearly twenty years ago. It started with an oil spill in Lagos, Nigeria. It happened. I looked it up.

Ford’s headquarters are near Gallup, New Mexico, the so-called Indian Capital of the World. The reception room is tastefully decorated in a Southwest motif which seems appropriate, after all, he is half Navajo.

I glance at my watch and bite my lip, a holdover habit from taking my finals at MIT. That’s where I first began to suspect what I now know–time travel is not science fiction.

My thoughts are interrupted by the receptionist’s phone beeping. “Yes, sir, he’s still here. I’ll send him right in.” She stands and smiles. “He’ll see you now.” Taking a breath, I get up, swallow the butterflies back into my stomach, and step into the breach.

French doors open into a large office. A floor-to-ceiling window frames distant red-rock cliffs formed during the age of dinosaurs. The outline of a man behind the desk was nearly lost in the panoramic view. As I enter the office, he leans over his desk and extends his hand. I am aware his intense blue eyes are studying me. It makes me feel self-conscious.

“Dr. Thompson, I’m Jesse Ford,” he says as though he needed an introduction. “Please sit.” Walking around his desk, he sits on one of the vacant easy chairs, crosses his legs, and faces me.

Lean and fit, he moves with a natural grace, smooth and easy. The blue eyes watch me, but there is a relaxed smile on his face. His black hair, stylishly long, has streaks of gray. I like him immediately.

I begin. “Ah yes, . . . yes, sir. Thank you for seeing me. My name is Tommy Thompson, Dr. Thomas Thompson.” Damn, I was hoping there would be some sign of recognition. “My father often spoke of you, Ben Thompson?”

“You’re Ben’s kid? Oh, hell yes, I know Ben. We had a few adventures together.” He grins. “Haven’t heard from him in a couple of years. How’s he doing? Well, I hope.”

“Unfortunately, he passed away about six months ago,” I said. “As a former Senator from Colorado, most of his life was spent in politics, and later Ambassador to France.” I was proud of my dad.

A look of regret crosses his face. “Sorry. I didn’t know about his passing. We drifted apart over the years—my condolences. Ben and I had quite a history in our younger years when we were both in the oil business.”

I nod. I’d heard the stories. “I believe you’re also acquainted with Dr. Hector Ramos and Chip Monk? They suggested I come to see you about a project I’m working on.”

His eyes grow wide, and recognition flashes across his face. “Both friends from the past,” he said with a knowing nod. “Okay, Tommy . . . can I call you Tommy? You now have my full attention. Is Hector retired yet?”

“I don’t think he’ll ever retire. He still dabbles in this and that.”

“I’ll bet. The father of teleportation can dabble in whatever he wants. What about Chip–a tough guy. He saved my ass more than once.”

“Yes, sir, I heard you all had some exciting times together.” I paused. “You remember Hector lost his arm?”

A faraway look crosses his face. He rubs his chin. “We were in Africa. Enough reminiscing. What can I do for you?”

I give him the condensed version. “I’m an MIT grad with a Doctorate in Quantum Physics and Evolutionary Biology. My major area of study is the evolution of mankind.”

I look up. A polite but neutral expression stares back at me.

“It was brutal for both sides. The Neanderthals were physically more powerful. And, despite a widely held belief, more developed on the evolutionary scale than their brothers, the Homo sapiens.”

“I wasn’t aware of that,” he said. “I always assumed the Neanderthals were thickheaded cavemen.”

I shake my head. “That’s the Hollywood version. On the contrary, the real Neanderthals knew the land, were better hunters, were stronger physically, and had a 300,000-year head-start. It was truly a war to determine the future of the modern human race. But, after a 100,000-year struggle, Homo sapiens were losing and on the verge of becoming extinct.”

He caught his breath. “I haven’t heard that version before.”

Time for the hook. “But why did the Homo sapiens win? How? Modern man, our ancestors, were on the edge of annihilation . . . until, for some unexplained reason, the balance of power shifted.”

He tilts his head and gives me a curious look. “What changed?”

I sit back–my turn to stare. “We can only speculate. There is evidence that Homo sapiens switched to a completely different fighting strategy, a strategy closely related to what we currently teach in our modern-day military academies, a strategy unlike any they used in the past. The balance of power shifted. The Neanderthals couldn’t compete.”

He sits back in his chair. “Sounds like the Neanderthals were outsmarted. I’m guessing they’re the ones now extinct?”

I shake my head. “Today’s modern man is a mixture. There is ample evidence of DNA interbreeding of the two species.”

He shrugs. “I guess that’s what happens when you lose a war. To the victor goes the spoils. An interesting story.” He glances at his watch. “So, I’m still confused about why you’re here, and I’m starting to be pressed for time.”

I drop my voice to a near whisper. “The best part is coming. Two years ago, in the Alps of Switzerland, speleologists found numerous bone fragments determined to be Neanderthals at the entrance of a cave. Curious, they explored deeper until they reached a point where further exploration was not possible.

“That’s where they discover a body. Thanks to the conditions in the cave, the body was in a near-perfect state. Carbon dating from labs in the U.S., England, and Australia all came back with the same date. The body is 40,000 years old, about when the war ended. DNA testing showed the body was a mixture of Homo sapiens and Neanderthal.

I look up, watching him. “The interesting part is the DNA and what they found near the body.”

“Well? What was it?” He frowns, a hint of impatience in his voice.

He jerked upright, crosses then uncrosses his legs. “What kind of weapon?”

My voice starts to quiver. I can’t stop it. “Scientists who have examined the weapon claim it’s made from a material that could only be developed by modern technology.”

I hold up my hand in a fist. “The caveman’s hand was wrapped around the weapon, probably holding it at his death.”

“Is all this documented?”

I opened my briefcase. “Pictures, carbon testing, and DNA results, . . . and there’s one more thing. The weapon was lying on a flat rock. On this rock, one word, barely visible, had been carved in the stone.”

I hear only silence, except for the ticking of the clock on the credenza.

Blood drained from his face. “English?”

I sat back in the chair, watching him with unblinking eyes. “Sir, there are rumors you—that is, your company, has developed a device that can transport a human through time . . . a time machine.”

He sucked in a breath, but his eyes would not meet mine. “You’re joking?”

“No, sir, I’m not. Dr. Hector Ramos and Chip Monk both used the machine. They went back twenty years to Lagos, Nigeria, to a time when Dr. Ramos had his right arm amputated and changed events, so it never happened. Even you admitted his arm was amputated. I have the medical records proving the amputation was done, when, and by whom. Despite this evidence, today Dr. Ramos has his right arm.”

His expression grew cold and distant. “I’m not sure I follow you, Dr. Thompson. What is it you want?” 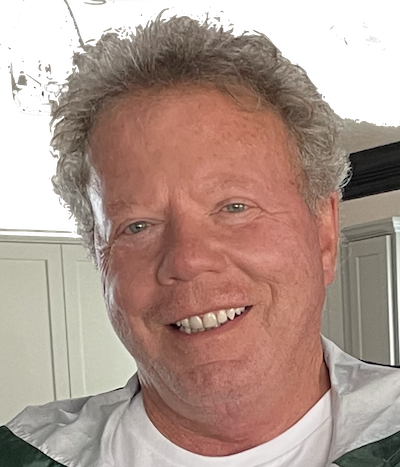 Keith Abbott is from Colorado where he spent 37 years as an attorney, much of his career spent in the oil and gas business. He has been published in The Colorado Lawyer magazine and is in the final stages of his first novel, Lights Out, a thriller of suspense and horror about a massive oil spill as a result of sabotage.